Of Storms on Titan

I always imagined Titan’s surface as a relatively calm place, perhaps thinking of the Huygens probe in an exotic, frigid landing zone that I saw as preternaturally still. Then, prompted by an analysis of what may be dust storms on Titan, I revisited what Huygens found. It turns out the probe experienced maximum winds about ten minutes after beginning its descent, at an altitude of some 120 kilometers. It was below 60 kilometers that the wind dropped. And during the final 7 kilometers, the winds were down to a few meters per second. At the surface, according to the European Space Agency, Huygens found a light breeze of 0.3 meters per second.

But is Titan’s surface always that quiet? The Cassini probe has shown us that Titan experiences interesting weather driven by a methane cycle that operates at temperatures far below Earth’s water cycle, filling its lakes and seas with methane and ethane. The evaporation of hydrocarbon molecules produces clouds that lead to rain, with conditions varying according to season. Conditions at the time of the equinox, with the Sun crossing Titan’s equator, are particularly lively, producing massive clouds and storms in the tropical regions.

So a lot can happen here depending on where and when we sample. Sebastien Rodriguez (Université Paris Diderot, France) and colleagues noticed unusual brightenings in infrared images made by Cassini near the moon’s 2009-2010 northern spring equinox. The paper refers to these as “three distinctive and short-lived spectral brightenings close to the equator.”

The first assumption was that these were clouds, but that idea was quickly discounted. Says Rodriguez:

“From what we know about cloud formation on Titan, we can say that such methane clouds in this area and in this time of the year are not physically possible. The convective methane clouds that can develop in this area and during this period of time would contain huge droplets and must be at a very high altitude — much higher than the 6 miles (10 kilometers) that modeling tells us the new features are located.” 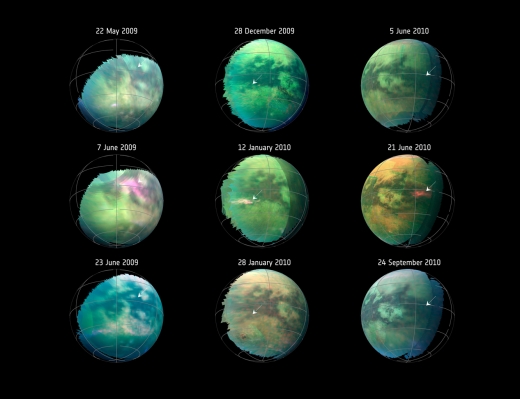 Image: This compilation of images from nine Cassini flybys of Titan in 2009 and 2010 captures three instances when clear bright spots suddenly appeared in images taken by the spacecraft’s Visual and Infrared Mapping Spectrometer. The brightenings were visible only for a short period of time — between 11 hours to five Earth weeks — and cannot be seen in previous or subsequent images. Credit: NASA/JPL-Caltech/University of Arizona/University Paris Diderot/IPGP.

In a paper just published in Nature Geoscience, the researchers likewise discount the possibility that Cassini had detected surface features, areas of frozen methane or lava flows of ice. The problem here is that the bright features in the infrared were visible for relatively short periods — 11 hours to 5 weeks — while surface spots should have remained visible for longer. Nor do they bear the chemical signature expected from such formations at the surface.

Image: This animation — based on images captured by the Visual and Infrared Mapping Spectrometer on NASA’s Cassini mission during several Titan flybys in 2009 and 2010 — shows clear bright spots appearing close to the equator around the equinox that have been interpreted as evidence of dust storms. Credit: NASA/JPL-Caltech/University of Arizona/University Paris Diderot/IPGP.

Rodriguez and team used computer modeling to show that the brightened features were atmospheric but extremely low, forming what is in all likelihood a thin layer of solid organic particles. Such particles form because of the interaction between methane and sunlight. Because the bright features occurred over known dune fields at Titan’s equator, Rodriguez believes that they are clouds of dust kicked up by wind hitting the dunes.

“We believe that the Huygens Probe, which landed on the surface of Titan in January 2005, raised a small amount of organic dust upon arrival due to its powerful aerodynamic wake,” says Rodriguez. “But what we spotted here with Cassini is at a much larger scale. The near-surface wind speeds required to raise such an amount of dust as we see in these dust storms would have to be very strong — about five times as strong as the average wind speeds estimated by the Huygens measurements near the surface and with climate models.” 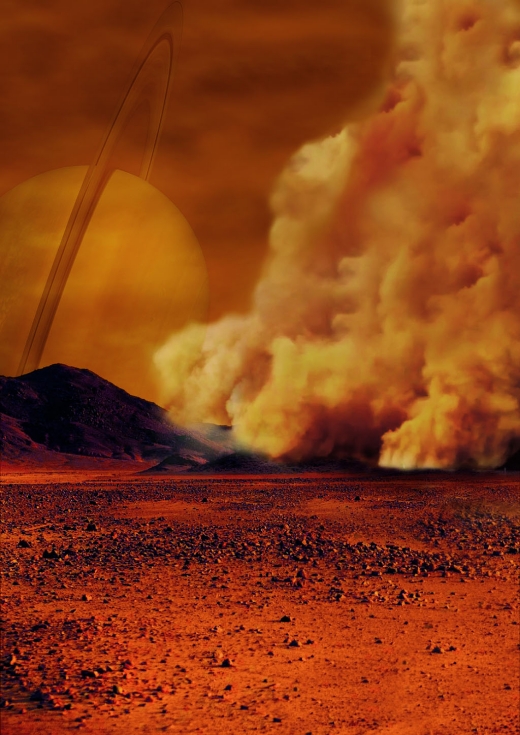 Image: Artist’s concept of a dust storm on Titan. Researchers believe that huge amounts of dust can be raised on Titan, Saturn’s largest moon, by strong wind gusts that arise in powerful methane storms. Such methane storms, previously observed in images from the international Cassini spacecraft, can form above dune fields that cover the equatorial regions of this moon especially around the equinox, the time of the year when the Sun crosses the equator. Credit: NASA/ESA/IPGP/Labex UnivEarthS/University Paris Diderot.

In reaching this conclusion, the researchers analyzed Cassini spectral data and deployed atmospheric models and simulations to show that micrometer-sized solid organic particles from the dunes below were responsible, an indication of dust in the atmosphere that far exceeds what Huygens found at the surface. The winds associated with the phenomenon would be unusually strong, but could be explained by downbursts in the equinoctial methane storms.

If dust storms can be created by such winds, then Titan’s equatorial regions are still active, with the dunes undergoing constant change. We have a world that is active not only in its hydrocarbon cycle and its geology, but also in what we can call its ‘dust cycle.’ The only moon in the Solar System with a dense atmosphere and surface liquid offers yet another analogy with Earth, a similarity that highlights the complexity of this frigid, hydrocarbon-rich world.