The Sagittarius Dwarf Galaxy is a satellite of the Milky Way, about 70,000 light years from Earth and in a trajectory that has it currently passing over the Milky Way’s galactic poles; i.e., perpendicular to the galactic plane. What’s intriguing about this satellite is that its path takes it through the plane of our galaxy multiple times in the past, a passage whose effects may still be traceable today. A team of scientists led by Teresa Antoja (Universitat de Barcelona) is now using Gaia data to trace evidence of its effects between 300 and 900 million years ago. 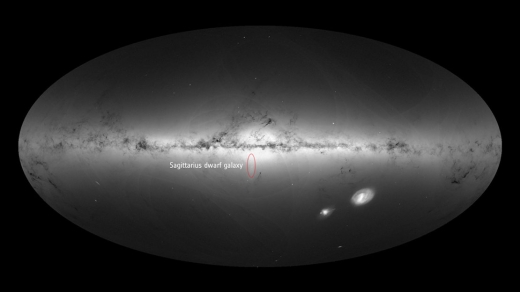 Image: The Sagittarius dwarf galaxy, a small satellite of the Milky Way that is leaving a stream of stars behind as an effect of our Galaxy’s gravitational tug, is visible as an elongated feature below the Galactic centre and pointing in the downwards direction in the all-sky map of the density of stars observed by ESA’s Gaia mission between July 2014 to May 2016. Credit: ESA/Gaia/DPAC.

This story gets my attention because of my interest in the Gaia data and the uses to which they can be put. We just looked at interstellar interloper ‘Oumuamua and saw preliminary work on tracing it back to a parent star. No origin could be determined, but the selection of early candidates was an indication of an evolving method in using the Gaia dataset, which will expand again with the 2021 release. The Sagittarius Dwarf galaxy compels a different method, and we’ll be seeing quite a few new investigations with methods of their own growing out of this attempt to begin a three-dimensional map of the Milky Way. A kinematic census of over one billion stars will come out of Gaia.

A billion stars represents less than 1 percent of the galactic population, so you can see how far we have to go, but we’re already finding innovative ways to put the Gaia data to use, as witness Antoja’s new paper in Nature. As we saw in ‘Oumuamua’s Origin: A Work in Progress, Gaia uses astrometric methods to measure not just the position but the velocity of stars on the plane of the sky. We also get a subset of a few million stars for which the mission will include radial velocity, producing stellar motion in a three-dimensional ‘phase space.’

By exploring the phase space of more than 6 million stars (positions and velocities) in the disk of the Galaxy in the first kiloparsecs around the Sun from the Gaia Data Release 2 (DR2, see Methods), we find that certain phase space projections show plenty of substructures that are new and that had not been predicted by existing models. These have remained blurred until now due to the limitations on the number of stars and the precision of the previously available datasets.

Antoja’s team found that these unique data revealed an unexpected pattern when stellar positions were plotted against velocity. The pattern is a snail shell shape that emerges when plotting the stars’ altitude above or below the plane of the galaxy against their velocity in the same direction. Nothing like this had been noted before, nor could it have been without Gaia.

“At the beginning the features were very weird to us,” says Antoja. “I was a bit shocked and I thought there could be a problem with the data because the shapes are so clear. It looks like suddenly you have put the right glasses on and you see all the things that were not possible to see before.” 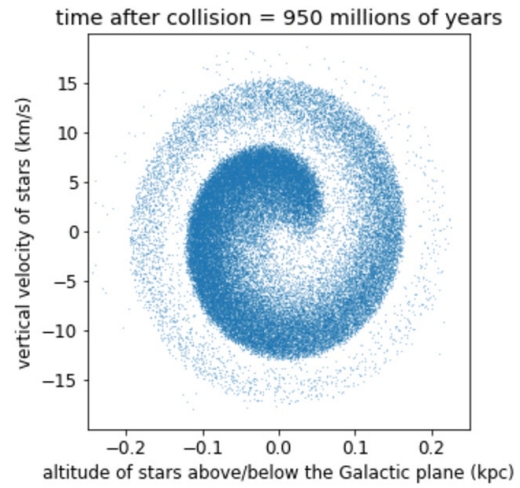 Image: This graph shows the altitude of stars in our Galaxy above or below the plane of the Milky Way against their velocity in the same direction, based on a simulation of a near collision that set millions of stars moving like ripples on a pond. The snail shell-like shape of the pattern reproduces a feature that was first seen in the movement of stars in the Milky Way disc using data from the second release of ESA’s Gaia mission, and interpreted as an imprint of a galactic encounter. Credit: T. Antoja et al. 2018.

Stellar motions, we are learning, produce ripples that may no longer show up in the stars’ visible distribution, but do emerge when their velocities are taken into consideration. Antoja and colleagues believe the cause of this motion was the Sagittarius Dwarf Galaxy, whose last close pass would have perturbed many stars in the Milky Way. The timing is the crux, for estimates of when the snail shell pattern began fit with the timing of the last dwarf galaxy pass.

As with the ‘Oumuamua study, we’re at the beginning of teasing out newly available information from the trove that Gaia is giving us. To firm up the connection with the Sagittarius Dwarf Galaxy, Antoja team has much to do as it moves beyond early computer modeling and analysis, but the evidence for perturbation, whatever the source, is clear. From the paper:

…an ensemble of stars will stretch out in phase space, with the range of frequencies causing a spiral shape in this projection. The detailed time evolution of stars in this toy model is described in Methods and shown in Extended Data Fig. 3. As time goes by, the spiral gets more tightly wound, and eventually, this process of phase mixing leads to a spiral that is so wound that the coarse-grained distribution appears to be smooth. The clarity of the spiral shape in the Z-VZ [vertical position and velocity] plane revealed by the Gaia DR2 data, implies that this time has not yet arrived and thus provides unique evidence that phase mixing is currently taking place in the disk of the Galaxy.

The shell-like pattern thus contains information about the distribution of matter in the Milky Way and the nature of stellar encounters. The bigger picture is that untangling the evolution of the galaxy and explaining its structure is what Gaia was designed for, a process that is now gathering momentum. We’re only beginning to see what options this mission is opening up.