8,000 light years from Earth in the constellation Cygnus, the star designated Kepler 1625 may be harboring a planet with a moon. The planet, Kepler 1625b, is a gas giant several times the mass of Jupiter. What David Kipping (Columbia University) and graduate student Alex Teachey have found is compelling though not definitive evidence of a moon orbiting the confirmed planet. 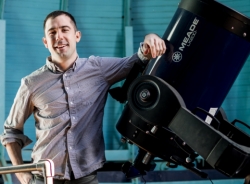 If we do indeed have a moon here, and upcoming work should be able to resolve the question, we are dealing, at least in part, with the intriguing scenario many scientists (and science fiction writers) have speculated about. Although a gas giant, Kepler 1625b orbits close to or within the habitable zone of its star. A large, rocky moon around it could be a venue for life, but the moon posited for this planet doesn‘t qualify. It’s quite large — roughly the size of Neptune — and like its putative parent, a gaseous body. If we can confirm the first exomoon, we’ll have made a major advance, but the quest for habitable exomoons does not begin around Kepler 1625b.

Image: Columbia’s Alex Teachey, lead author of the paper on the detection of a potential exomoon. Credit: Columbia University.

None of this should take away from the importance of the detection, for exploring moons around exoplanets will doubtless teach us a great deal about how such moons form. Unlike the Earth-Moon system, or the Pluto/Charon binary in our own Solar System, Kepler-1625b’s candidate moon would not have formed through a collision between two rocky bodies early in the history of planetary development. We’d like to learn how it got there, if indeed it is there. Far larger than any Solar System moon, it is estimated to be but 1.5% of its companion’s mass. 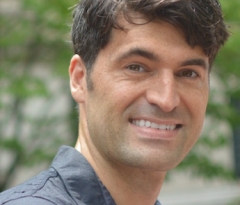 The methods David Kipping has long espoused through the Hunt for Exomoons with Kepler (HEK) project have come to fruition here. Working with data on 284 planets identified through the Kepler mission, each of them with orbital periods greater than 30 days, Kipping and Teachey found interesting anomalies at Kepler-1625b, where Kepler had recorded three transits. The lightcurves produced by these transits across the face of the star as seen from the spacecraft showed deviations that demanded explanation.

Their interest heightened, the researchers requested and were awarded 40 hours of time on the Hubble Space Telescope, whose larger aperture could produce data four times more precise than that available from Kepler. On October 28 and 29 of 2017, the scientists took data through 26 Hubble orbits. Examining the lightcurve of a 19-hour long transit of Kepler-1625b, they noted a second, much smaller decrease in the star’s light some 3.5 hours later.

Kipping refers to it as being consistent with “…a moon trailing the planet like a dog following its owner on a leash,” but adds that the Hubble observation window closed before the complete transit of the candidate moon could be measured. The paper addresses this second dip:

The most compelling piece of evidence for an exomoon would be an exomoon transit, in addition to the observed TTV [transit timing variation]. If Kepler-1625b’s early transit were indeed due to an exomoon, then we should expect the moon to transit late on the opposite side of the barycenter. The previously mentioned existence of an apparent flux decrease toward the end of our observations is therefore where we would expect it to be under this hypothesis. Although we have established that this dip is most likely astrophysical, we have yet to discuss its significance or its compatibility with a self-consistent moon model.

In and of itself, this is exciting information, but as noted above, we also learn in this morning’s paper in Science Advances that transit timing variations are apparent here. The planet itself began its transit 77.8 minutes earlier than predicted. One way to account for this is by the pull of a moon on the planet, resulting in their both orbiting a common center of gravity and thus throwing the transit calculation (based on an unaccompanied planet) off. What Kipping and Teachey will need to eliminate is the possibility that a second planet, yet undetected, could have caused the timing variation. There is thus far no evidence from Kepler of such a planet.

“A companion moon is the simplest and most natural explanation for the second dip in the light curve and the orbit-timing deviation,” said lead author Teachey. “It was a shocking moment to see that light curve, my heart started beating a little faster and I just kept looking at that signature. But we knew our job was to keep a level head testing every conceivable way in which the data could be tricking us until we were left with no other explanation.”

Image: This is Figure 4 from the paper. Caption: Moon solutions. The three transits in Kepler (top) and the October 2017 transit observed with HST (bottom) for the three trend model solutions. The three colored lines show the corresponding trend model solutions for model M, our favored transit model. The shape of the HST transit differs from that of the Kepler transits owing to limb darkening differences between the bandpasses. Credit: David Kipping, Alex Teachey.

One problem with exomoon hunting is that the ideal candidate planets are those in wide orbits, but this makes for long periods between transits. Even so, the number of large planets in orbits farther from their star than 1 AU is growing, and such worlds should be useful targets for the upcoming James Webb Space Telescope. Although we still have to confirm Kepler-1625b’s moon, such a confirmation could prove only the beginning of a growing exomoon census.

We’ll know more as we make more detections, but for now, I think Kipping and Teachey’s caution is commendable. Noting that confirmation will involve long scrutiny, observations and skepticism from within the community, they point out:

…it is difficult to assign a precise probability to the reality of Kepler-1625b-i. Formally, the preference for the moon model over the planet-only model is very high, with a Bayes factor exceeding 400,000. On the other hand, this is a complicated and involved analysis where a minor effect unaccounted for, or an anomalous artifact, could potentially change our interpretation. In short, it is the unknown unknowns that we cannot quantify. These reservations exist because this would be a first-of-its-kind detection — the first exomoon.

A final thought: The paper points out that the original Kepler data that flagged Kepler-1625b as interesting in exomoon terms were actually stronger than the Kepler data Kipping and Teachey added into the mix for this work. They are now working with the most recent release, which had to be revisited for all factors that could affect the analysis. It turns out that this most recent release “only modestly favors that hypothesis when treated in isolation.” The HST data make the strongest case in strengthening the case for an exomoon. The authors believe that this shows the need to pursue similar Kepler planets for exomoons with HST and other facilities, even in cases where the Kepler data themselves do not show a large exomoon-like signature.

The paper is Teachey & Kipping, “Evidence for a large exomoon orbiting Kepler-1625b,” Science Advances 3 October 2016 (complete citation when I have it).