Whether or not there is an undiscovered planet lurking in the farthest reaches of the Solar System, the search for unknown dwarf planets and other objects continues. Extreme Trans-Neptunian objects (ETNOs) are of particular interest. The closest they come to the Sun is well beyond the orbit of Neptune, with the result that they have little gravitational interaction with the giant planets. Consider them as gravitational probes of what lies beyond the Kuiper Belt.

Among the population of ETNOs are the most distant subclass, known as Inner Oort Cloud objects (IOCs), of which we now have three. Added to Sedna and 2012 VP113 comes 2015 TG387, discovered by Scott Sheppard (Carnegie Institution for Science), Chad Trujillo (Northern Arizona University) and David Tholen (University of Hawaiʻi). The object was first observed in 2015, leading to several years of follow-up observations necessary to obtain a good orbital fit.

For 2015 TG387 is a challenging catch, discovered at about 80 AU from the Sun but normally at far greater distance:

“We think there could be thousands of small bodies like 2015 TG387 out on the Solar System’s fringes, but their distance makes finding them very difficult,” Tholen said. “Currently we would only detect 2015 TG387 when it is near its closest approach to the sun. For some 99 percent of its 40,000-year orbit, it would be too faint to see, even with today’s largest telescopes.” 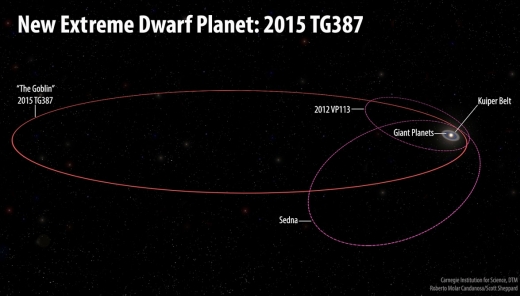 Image: The orbits of the new extreme dwarf planet 2015 TG387 and its fellow Inner Oort Cloud objects 2012 VP113 and Sedna, as compared with the rest of the Solar System. 2015 TG387 was nicknamed “The Goblin” by its discoverers, since its provisional designation contains “TG”, and the object was first seen around Halloween. Its orbit has a larger semi-major axis than both 2012 VP11 and Sedna, so it travels much farther from the Sun, out to 2300 AU. Credit: Roberto Molar Candanosa and Scott Sheppard / Carnegie Institution for Science.

Perihelion, the closest distance this object gets to the Sun, is now calculated at roughly 65 AU, so we are dealing with an extremely elongated orbit. 2015 TG387 has, after VP113 and Sedna (80 and 76 AU respectively), the third most distant perihelion known, but it has a larger orbital semi-major axis, so its orbit carries it much further from the Sun than either, out to about 2,300 AU. At these distances, Inner Oort Cloud objects are all but isolated from the bulk of the Solar System’s mass.

You may recall that it was Sheppard and Trujillo who discovered 2012 VP113 as well, triggering a flurry of investigation into the orbits of such worlds. The gravitational story is made clear by the fact that Sedna, 2012 VP113 and 2015 TG387 all approach perihelion in the same part of the sky, as do most known Extreme Trans-Neptunian objects, an indication that their orbits are being shaped by something in the outer system. Thus the continuing interest in so-called Planet X, a hypothetical world whose possible orbits were recently modeled by Trujillo and Nathan Kaib (University of Oklahoma).

The simulations show the effect of different Planet X orbits on Extreme Trans-Neptunian objects. In 2016, drawing on previous work from Sheppard and Trujillo, Konstantin Batygin and Michael Brown examined the orbital constraints for a super-Earth at several hundred AU from the Sun in an elliptical orbit. Including such a world in their simulations, the latter duo were able to show that several presumed planetary orbits could result in stable orbits for other Extreme Trans-Neptunian objects. Let’s go to the paper to see how 2015 TG387 fits into the picture:

…Trujillo (2018) ran thousands of simulations of a possible distant planet using the orbital constraints put on this planet by Batygin and Brown (2016a). The simulations varied the orbital parameters of the planet to identify orbits where known ETNOs were most stable. Trujillo (2018) found several planet orbits that would keep most of the ETNOs stable for the age of the solar system.

So we’ve fit the simulated orbit with Sedna, 2012 VP113 and other ETNOs. The next step was obvious:

Image: Movie of the discovery images of 2015 TG387. Two images were taken about 3 hours apart on October 13, 2015 at the Subaru Telescope on Maunakea, Hawaiʻi. 2015 TG387 can be seen moving between the images near the center, while the more distant background stars and galaxies remain stationary. Credits: Dave Tholen, Chad Trujillo, Scott Sheppard.

We know very little about 2015 TG387 itself, though the paper, assuming a moderate albedo, finds a likely diameter in the range of 300 kilometers. The stability of this small object’s orbit, keeping it aligned and stable in relation to the eccentric orbit of the hypothesized Planet X, supports the existence of the planet, especially since the derived orbit of 2015 TG387 was determined after the Planet X orbital simulations. Despite this, notes the paper in conclusion, “…2015 TG387 reacts with the planet very similarly to the other known IOCs and ETNOs.”

Another interesting bit: There is a suggestion that ETNOs in retrograde orbit are stable. Given this, the authors do not rule out the idea that the planet itself might be on a retrograde orbit.

Next post: DE-STAR and Breakthrough Starshot: A Short History