Last Monday’s article on the Trillion Planet Survey led to an email conversation with Phil Lubin, its founder, in which the topic of Breakthrough Starshot invariably came up. When I’ve spoken to Dr. Lubin before, it’s been at meetings related to Starshot or presentations on his DE-STAR concept. Standing for Directed Energy System for Targeting of Asteroids and exploRation, DE-STAR is a phased laser array that could drive a small payload to high velocities. We’ve often looked in these pages at the rich history of beamed propulsion, but how did the DE-STAR concept evolve in Lubin’s work for NASA’s Innovative Advanced Concepts office, and what was the path that led it to the Breakthrough Starshot team?

The timeline below gives the answer, and it’s timely because a number of readers have asked me about this connection. Dr. Lubin is a professor of physics at UC-Santa Barbara whose primary research beyond DE-STAR has involved the early universe in millimeter wavelength bands, and a co-investigator on the Planck mission with more than 400 papers to his credit. He is co-recipient of the 2006 Gruber Prize in Cosmology along with the COBE science team for their groundbreaking work in cosmology. Below, he tells us how DE-STAR emerged. 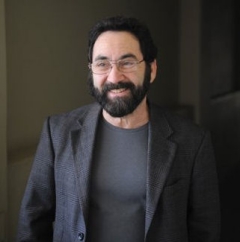 February 14, 2013: UCSB group has press release about DE-STAR program to generate public discussion about applications of DE to planetary defense in anticipation of February 15 asteroid 2012 DA14, which was to come within geosync orbit. On February 15 Chelyabinsk meteor/asteroid hit. This singular coincidence of press release and hit the next day generated a significant change in interest in possible use of large scale DE for space applications. This “pushed the DE ball over the hill”.

August 2013: Philip Lubin and group begin publication of detailed technical papers in multiple journals. DE-STAR program is introduced at invited SPIE [Society of Photo-optical Instrumentation Engineers] plenary talk in San Diego at Annual Photonics meeting. More than 50 technical papers and nearly 100 colloquia from his group have emerged since then. List of DE-STAR papers can be found here.

August 2013: 1st Interstellar Congress held in Dallas, Texas by Icarus Interstellar. Eric Malroy introduces concepts for the use of nanomaterials in sails.

January 2014: Work begins on extending previous UCSB paper to much longer “roadmap” paper which becomes “A Roadmap to Interstellar Flight” (see below).

February 11, 2014 – Lubin gives colloquium on DE-STAR at the SETI Institute in Mountain View, CA. Summarizes UCSB DE program for planetary defense, relativistic propulsion and implications for SETI. SETI Institute researchers suggest Lubin speak with NASA Ames director Pete Worden as he was not at the talk. Worden eventually leaves Ames a year later on March 31, 2015 to go to the Breakthrough Foundation. Lubin and Worden do not meet until 18 months later at the Santa Clara 100YSS meeting (see below).

April 2015: Lubin submits the “roadmap” paper to the Journal of the British Interplanetary Society.

August 31, 2015: August 31, 2015: Lubin and Pete Worden attend 100YSS (100 Year Star Ship) conference in Santa Clara, CA [Worden is now executive director, Breakthrough Starshot, and former director of NASA Ames Research Center]. Lubin is invited by Mae Jemison (director of 100YSS) to give a talk about the UCSB NASA DE program as a viable path to interstellar flight. Worden has to leave before Lubin’s talk, but in a hallway meeting Lubin informs Worden of the UCSB NASA Phase I NASA program for DE driven relativistic flight. This meeting takes places as Lubin recalls Feb 2014 SETI meeting where a discussion with Worden is suggested. Worden asks for further information about the NASA program and Lubin sends Worden the paper “A Roadmap to Interstellar Flight” summarizing the NASA DEEP-IN program. Worden subsequently forwards paper to Yuri Milner.

December 2015: Milner calls for meeting with Lubin to discuss DEEP-IN program, “roadmap” paper and the prospects for relativistic flight.

January 2016: First meeting with Milner in Palo Alto. Present are Lubin, Milner, Avi Loeb (Harvard University), Worden and Klupar. Milner sends “roadmap” paper to be reviewed by other physicists. A long series of calls and meetings ensue. This begins the birth of Breakthrough Starshot program.

To keep up with developments, the following websites are useful: