I want to talk about the Voyagers this morning and their continuing interstellar mission, but first, a quick correction. Yesterday in writing about New Horizons’ flyby of MU69, I made an inexplicable gaffe, referring to the event as occurring on the 19th rather than the 1st of January (without my morning coffee, I had evidently fixated on the ‘19’ of 2019). Several readers quickly spotted this in the article’s penultimate paragraph and I fixed it, but unfortunately the email subscribers received the uncorrected version. So for the record, we can look forward to the New Horizons flyby of MU69 on January 1, 2019 at 0533 UTC. Sorry about the error.

Let’s turn now to the Voyagers, and the question of how long they will stay alive. I often see 2025 cited as a possible terminus, with each spacecraft capable of communication with Earth and the operation of at least one instrument until then. If we make it to 2025, then Voyager 1 would be 160 AU out, and Voyager 2 will have reached 135 AU or thereabouts. In his book The Interstellar Age, Jim Bell — who worked as an intern on the Voyager science support team at JPL starting in 1980, with Voyager at Saturn — notes that cycling off some of the remaining instruments after 2020 could push the date further, maybe to the late 2020s.

After that? With steadily decreasing power levels, some heaters and engineering subsystems will have to be shut down, and with them the science instruments, starting with the most power-hungry. Low-power instruments like the magnetometer could likely stay on longer.

And then there’s this possibility. Stretching out their lifetimes might demand reducing the Voyagers’ output to an engineering signal and nothing else. Bell quotes Voyager project scientist Ed Stone: “As long as we have a few watts left, we’ll try to measure something.”

Working with nothing more than this faint signal, some science could be done simply by monitoring it over the years as it recedes. Keep Voyager doing science until 2027 and we will have achieved fifty years of science returns. Reduced to that single engineering signal, the Voyagers might stay in radio contact until the 2030s. 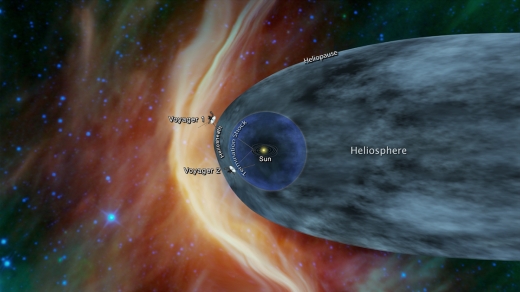 Bear in mind the conditions the Voyagers have to deal with even now. With more than 25 percent of their plutonium having decayed, power limitations are a real factor. If either Voyager passed by an interesting inner Oort object, the cameras could not be turned on because of the power drain, which would shut down their heaters. Continuing power demands from radio communications and the heaters create thorny problems for controllers.

Even so, we’re still doing good science. Today the focus is on a still active Voyager 2, which may be nearing interstellar space. Voyager 2 is now 17.7 billion kilometers from Earth, about 118 AU, and has been traveling through the outermost layers of the heliosphere since 2007. The solar wind dominates this malleable region, which changes during the Sun’s eleven year activity cycle. Solar flares and coronal mass ejections all factor into its size and shape. Ahead is the heliosphere’s outer boundary, the heliopause, beyond which lies interstellar space.

The Cosmic Ray Subsystem instrument on Voyager 2 is now picking up a 5 percent increase in the rate of cosmic rays hitting the spacecraft as compared with what we saw in early August. Moreover, the Low-Energy Charged Particle instrument is picking up an increase in higher-energy cosmic rays. The increases parallel what Voyager 1 found beginning in May, 2012, about three months before it exited the heliopause.

So we may be about to get another interstellar spacecraft. Says Ed Stone:

“We’re seeing a change in the environment around Voyager 2, there’s no doubt about that. We’re going to learn a lot in the coming months, but we still don’t know when we’ll reach the heliopause. We’re not there yet — that’s one thing I can say with confidence.”

We haven’t crossed the outer regions of the heliosphere with a functioning spacecraft more than once, so there is a lot to learn. Voyager 2 moves through a different part of the outer heliosphere — the heliosheath — than Voyager 1 did, so we can’t project too much into the timeline. We’ll simply have to keep monitoring the craft to see what happens.

What an extraordinary ride it has been, and here’s hoping we can keep both Voyagers alive as long as possible. Even when their power is definitively gone, they’ll still be inspiring our imaginations. We’re 300 years from the Inner Oort Cloud, and a whopping 30,000 years from the Oort Cloud’s outer edge. In 40,000 years, Voyager 2 will pass about 110,000 AU from the red dwarf Ross 248, which will at that time be the closest star to the Sun. Both spacecraft will eventually follow 250-million year orbits around the center of the Milky Way.

I return to Jim Bell, who waxes poetic at the thought. He envisions a far future when our remote descendants may be able to see the Voyagers again. Here is a breathtaking vision indeed:

Over time — enormous spans of time, as the gravity of passing stars and interacting galaxies jostles them as well as the stars in our galaxy — I imagine that the Voyagers will slowly rise out of the plane of our Milky Way, rising, rising ever higher above the surrounding disk of stars and gas and dust, as they once rose above the plane of their home stellar system. If our far-distant descendants remember them, then our patience, perseverance, and persistence could be rewarded with perspective when our species — whatever it has become — does, ultimately, follow them. The Voyagers will be long dormant when we catch them, but they will once again make our spirits soar as we gaze upon these most ancient of human artifacts, and then turn around and look back. I have no idea if they’ll still call it a selfie then, but regardless of what it’s called, the view of our home galaxy, from the outside, will be glorious to behold.