It was back in 2012 that Eric Mamajek (University of Rochester) and team discovered a possible ring system around the star J1407 in lightcurves originally taken in 2007, spawning subsequent work with Leiden Observatory’s Matthew Kenworthy. And what a ring system it would be if confirmed. The diameter, based on the lightcurve, would be nearly 120 million kilometers. This would be a ring system nearly 200 times larger than the rings of Saturn, one containing an Earth’s mass of dust particles, and in early studies, one housing over thirty separate rings.

Image: Artist’s conception of the extrasolar ring system circling the young giant planet or brown dwarf J1407b. The rings are shown eclipsing the young sun-like star J1407, as they would have appeared in early 2007. Credit: Ron Miller.

The possible J1407 ring system provides a nice segue from yesterday’s post on recovering astronomical images from a century’s worth of scientific journals, as Centauri Dreams reader Andrew Tribick was quick to note in the comments to that post. For Robin Mentel, working under Kenworthy at Leiden University, has made an analysis of hundreds of photographic plates containing J1407 from 1890 to 1990, finding no eclipses by the planet J1407b. Let’s dig into what that means with the help of a new paper.

Mentel began two years ago studying some 868 photographic plates containing the star, the oldest being data from the Harvard DASCH project (Digital Access to a Sky Century @ Harvard). These results were supplemented with more recent photometry to constrain the orbital period of J1407b. He also examined plates from collections held by Bamberg and Sonneberg observatories, comparing the brightness of J1407 with two equally bright stars nearby. An obscuration by eclipsing planet and rings would dim the star, but no such obscuration was found.

Thus we have useful information to add to what was a remarkable lightcurve, as discussed in a 2015 paper by Kenworthy and Mamajek. Have a look. 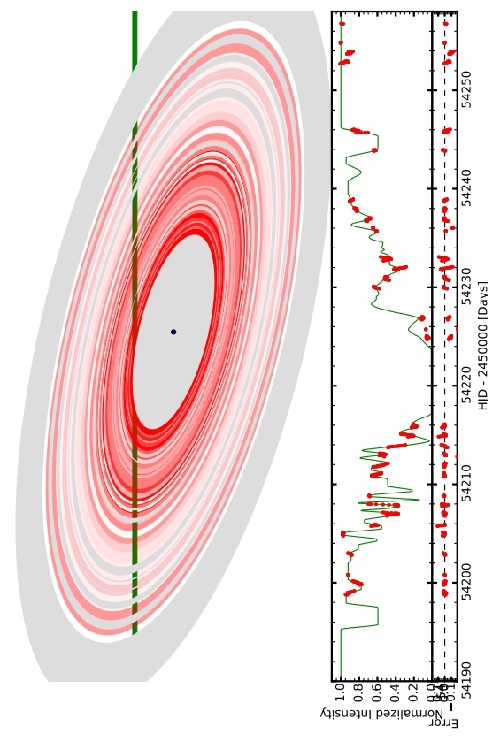 Image: From the 2015 paper. The caption reads: “Model ring fit to J1407 data. The image of the ring system around J1407b is shown as a series of nested red rings. The intensity of the colour corresponds to the transmission of the ring. The green line shows the path and diameter of the star J1407 behind the ring system. The grey rings denote where no photometric data constrain the model fit. The lower graph shows the model transmitted intensity I(t) as a function of HJD. The red points are the binned measured flux from J1407 normalised to unity outside the eclipse. Error bars in the photometry are shown as vertical red bars.” Credit: Matthew Kenworthy/Eric Mamajek.

In 2015 I quoted Kenworthy on what the lightcurve seemed to imply:

“The details that we see in the light curve are incredible. The eclipse lasted for several weeks, but you see rapid changes on time scales of tens of minutes as a result of fine structures in the rings. The star is much too far away to observe the rings directly, but we could make a detailed model based on the rapid brightness variations in the star light passing through the ring system. If we could replace Saturn’s rings with the rings around J1407b, they would be easily visible at night and be many times larger than the full moon.”

So what exactly are we dealing with here? The photographic plates allow Mentel and team to calculate how long the period between eclipses might be given gaps in the photographic record. Bear in mind that J1407 is not a circumpolar star, meaning we lack photometric data for more than 50% of the year, when the star was not visible. The paper explains the methodology in detail, including the rejection of numerous plates that lacked reliable photometry of J1407.

Factoring all this in, there remains the possibility of another eclipse between 2021 and 2024, but no guarantees. From the paper:

And while the new work allows the scientists to exclude a range of orbital periods, it also allows for speculation on the planet’s mass and the shape of its orbit. Moreover, it leaves open the question of what the original observations of 2007 actually recorded:

Elliptical orbits with periastron passage during May 2007 allow a range of possible masses from 5 to 20 MJup and infer an ellipticity of about 0.75. In this case, the rings would fill 70 to 100% of the Hill sphere of [the] companion, and exceed the shrinking hill sphere during periastron by at least a factor of two.

The Hill sphere referred to above is the region within which a planet dominates the attraction of satellites (named after astronomer George William Hill, 1838-1914). In other words, the moon of a planet should lie within the planet’s Hill sphere if the planet is to hold onto it. The paper goes on to make a significant statement about the possible ring detection:

Although the range of orbital periods has been reduced, the lack of the detection of another eclipse means that we still cannot confirm that the eclipse event in 2007 was due to an extended object on a bound orbit around J1407.

If they are there, the rings should show up in continued photometric monitoring of the star, and the authors suggest direct detection of the rings at submillimeter wavelengths by ALMA or at optical wavelengths through the polarization of reflected light from J1407. The broader picture is that we are beginning to put imagery from older observations to work in their newly digitized form. Bear in mind that the DASCH project alone takes in 500,000 photographic plates between 1885 and 1993, and you can see the potential for discovery as well as the immense challenge involved in assembling these materials from observatories and universities all over the world.

The paper is Mentel et al., “Constraining the period of the ringed secondary companion to the young star J1407 with photographic plates,” accepted at Astronomy & Astrophysics (abstract / preprint). The Kenworthy and Mamajek paper from 2015 is “Modeling giant extrasolar ring systems in eclipse and the case of J1407b: sculpting by exomoons?” Astrophysical Journal Vol. 800, No. 2 (abstract / preprint).

Next post: An Infant System Laden with Gas Giants

Previous post: Reviving Deep Sky Images from the Past