We’ve never found a ‘hot Jupiter’ around a star as young as CI Tau. This well studied system, some 2 million years old, has drawn attention for its massive disk of dust and gas, one that extends hundreds of AU from the star. But radial velocity examination recently revealed CI Tau b, a hot Jupiter that in and of itself raises questions. Couple that to the likelihood of three other gas giant planets emerging in the disk with extreme differences in orbital radii and it’s clear that CI Tau challenges our ideas of how gas giants, especially hot Jupiters, emerge and evolve.

Can a hot Jupiter form in place, or is migration from a much more distant orbit the likely explanation? The latter seems likely, and in that case, what was the mechanism here around such a young star? Most hot Jupiter host stars have lost their protoplanetary disks, which means that astronomers have been working with theoretical formation models to produce the observed tight orbits. And because about 1 percent of main sequence solar type stars (CI Tau is a K4IV object) have hot Jupiters around them, the riddle of their formation demands resolution.

The new work on CI Tau comes via high resolution imaging at submillimeter wavelengths at the Atacama Large Millimeter/submillimeter Array (ALMA), where Cathie Clarke (Cambridge Institute of Astronomy) and colleagues have found three distinct gaps in the star’s protoplanetary disk at ∼ 13, 39 and 100 au. The team’s paper in Astrophysical Journal Letters reports on computer modeling showing that these gaps are likely caused by additional gas giant planets. 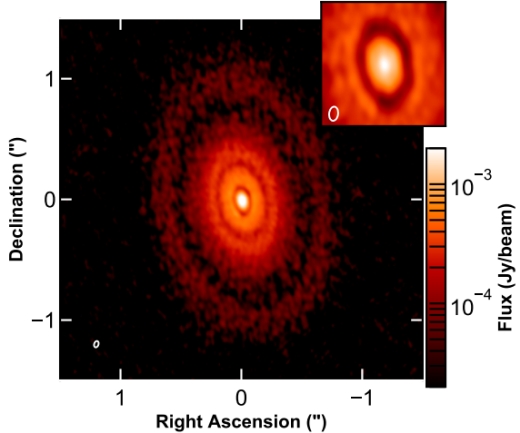 Making the find even more intriguing is that while CI Tau b is in an orbit not dissimilar from Mercury’s, the farthest putative planet orbits at a distance three times that of Neptune. All are large objects — the two outer worlds are roughly the mass of Saturn, while the two inner planets weigh in at 1 Jupiter mass and 10 Jupiter masses for the hot Jupiter. We’re left with the question of how these other planets affected the hot Jupiter’s orbital position, and whether there is a mechanism at work here that could apply to hot Jupiters in other systems.

For that matter, how did the two Saturn-class planets emerge where they are?

“Planet formation models tend to focus on being able to make the types of planets that have been observed already, so new discoveries don’t necessarily fit the models,” said Clarke. “Saturn mass planets are supposed to form by first accumulating a solid core and then pulling in a layer of gas on top, but these processes are supposed to be very slow at large distances from the star. Most models will struggle to make planets of this mass at this distance.”

No doubt. Complicating the picture further is that we have only learned about these planet candidates because of their effects on the protoplanetary disk, so whether or not extreme orbital parameters like these are common in hot Jupiter systems remains an open question. After all, older systems like those we’ve found other hot Jupiters in have already lost their disks.

The Jovian-class worlds may turn out to be easier to explain. Despite CI Tau’s relative youth, the authors argue that its hot Jupiter would still have had time to make the migration into hot Jupiter range. From the paper:

The hot Jupiter… could have been formed by a variety of mechanisms; from the modeled masses in disc and planets and from the accretion on to the star the inferred timescale for its inward migration is ∼ 0.4 Myr (Dürmann & Kley 2015) so that there would have been plenty of time for it to have migrated from a range of outward lying locations. The roughly Jovian mass planet inferred at 14 au is also easy to account for in terms of existing planet formation models (i.e. core accretion models involving either planetesimal or pebble accretion.

But those two outer ‘Saturns’ will need further work. We have a number of planetary disks with well-defined substructure to look at (HL Tau, HD 163296 and HD 169142, among others), but none with a hot Jupiter. Is this orbital configuration one that can survive on billion-year timescales? The authors believe these planets may still end up at small radii, suggesting they could be eventually ejected from the system by gravitational interactions. It will take future imaging surveys to tell us whether systems like the emerging one at CI Tau can be long-lived.