Given their ubiquity in the Milky Way, red dwarfs would seem to offer abundant opportunities for life to emerge. But we’re a long way from knowing how habitable the planets that orbit them might be. While mechanisms for moderating the climate on tidally locked worlds in tight habitable zones continue to be discussed, the issue of flares looms large. That makes a new survey of 12 young red dwarfs, and the project behind it, of unusual interest in terms of astrobiology.

What jumps out at the reader of Parke Loyd and team’s paper is the superflare their work caught that dwarfed anything ever seen from our own Sun, a much larger star. It was enough to set Loyd, a postdoctoral researcher at Arizona State University, back on his heels.

“When I realized the sheer amount of light the superflare emitted, I sat looking at my computer screen for quite some time just thinking, ‘Whoa.’” He adds: “With the Sun, we have a hundred years of good observations. And in that time, we’ve seen one, maybe two, flares that have an energy approaching that of the superflare. In a little less than a day’s worth of Hubble observations of these young stars, we caught the superflare. This means that we’re looking at superflares happening every day or even a few times a day.” 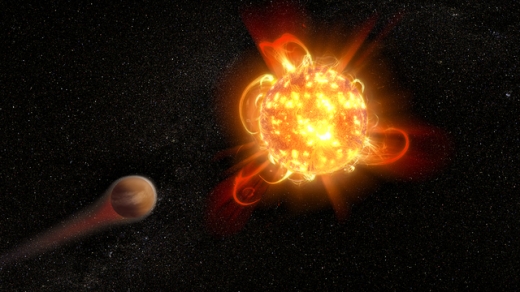 Image: Violent outbursts of seething gas from young red dwarfs may make conditions uninhabitable on fledgling planets. In this artist’s rendering, an active, young red dwarf (right) is stripping the atmosphere from an orbiting planet (left). ASU astronomers have found that flares from the youngest red dwarfs they surveyed — approximately 40 million years old — are 100 to 1000 times more energetic than when the stars are older. They also detected one of the most intense stellar flares ever observed in ultraviolet light — more energetic than the most powerful flare ever recorded from our Sun. Credit: NASA, ESA, and D. Player (STScI)

Loyd’s work is under the aegis of a program called HAZMAT, which stands for HAbitable Zones and M dwarf Activity across Time (ASU’s Evgenya Shkolnik is principal investigator for this project). The issue of time is significant, for HAZMAT will survey young, intermediate and old M-dwarfs using data from the Hubble Space Telescope, and this initial paper focuses on stars that are roughly 40 million years old, mere infants given that this category of star can burn for as long as a trillion years.

As to that superflare, it’s easy to see why it gave Loyd pause. His team detected 18 flares from its 12 target stars, but the superflare swamped them all, emitting 1032.1 erg in the far ultraviolet. That exceeds the most energetic flare from an M-dwarf previously observed by Hubble by a factor of 30.

Have a look at the paper’s description of what the authors call the ‘Hazflare’ in comparison to other flare observations from the past:

This observation is of particular value because superflares are common on stars (e.g., Davenport 2016), yet spectrophotometry of such flares in the UV, the band most relevant to planetary atmospheric photochemistry, is rare. Superflares are estimated from Kepler data to occur on M0–M4 dwarfs at a frequency of a few per day (Yang et al. 2017). Photochemical models exploring the effects of flares on planetary atmospheres have thus far relied primarily on observations of the 1985 Great Flare on AD Leo (Hawley & Pettersen 1991; Segura et al. 2010; Tilley et al. 2017), a flare estimated to emit a bolometric energy of 1034 erg. The Great Flare also showed a clear continuum in FUV emission, and overall the continuum was responsible for at least an order of magnitude more overall energy emitted by the flare than lines, consistent with the Hazflare. However, the Great Flare observations, made with the International Ultraviolet Explorer, saturated in the strongest emission lines, degrading their accuracy. 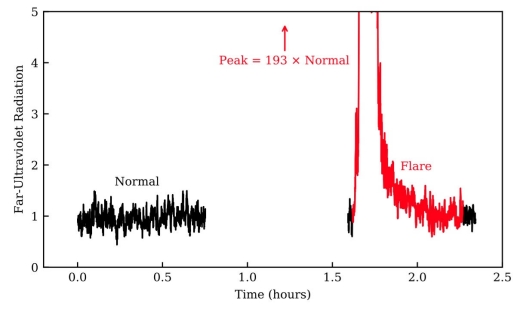 Image: Observations with the Hubble Space Telescope discovered a superflare (red line) that caused a red dwarf star’s brightness in the far ultraviolet to abruptly increase by a factor of nearly 200. Credit: P. Loyd/ASU.

So the HAZMAT observations prove valuable indeed. Superflares like the one described in this paper are far more common in young dwarfs, which can erupt up to 1,000 times more powerfully in their youth than after they have aged, and the Kepler data on their frequency (above) are noteworthy. The mechanism: Strong magnetic fields twisted by the churning atmosphere of the young star, causing them to break and reconnect, a process producing huge amounts of energy. Such violent activity is associated with M-dwarfs in the first 100 million years of their lifetime.

You would think we could just wait out flare activity and assume that older M-dwarfs were our best bet for habitable conditions, but a key question is what kind of damage will already have been done. Pummeling from flares like these could cause atmospheric damage, perhaps even stripping the atmosphere from what might have been promising worlds in the zone where liquid water could exist on the surface. Ultraviolet and X-ray radiation, even if it leaves the atmosphere more or less intact, would also be a huge factor in determining the emergence of surface life, possibly acting as an evolutionary spur or conceivably preventing it from appearing at all.

We also have to learn what processes can replenish the atmosphere of a planet if it undergoes a period of intense UV bombardment followed by a gradually calmer stellar environment. The sheer longevity of red dwarfs gives reason to hope that life could eventually emerge, but we won’t know until we can make the kind of atmospheric observations that will be coming our way through missions like the Transiting Exoplanet Survey Satellite (TESS), the James Webb Space Telescope and the European Space Agency’s ARIEL (Atmospheric Remote-sensing Infrared Exoplanet Large-survey) observatory. The latter, to be launched in 2028, will make a large-scale survey of the chemistry of exoplanet atmospheres using transit methods.

But back to HAZMAT, which will move on next to intermediate-age red dwarfs some 650 million years old, followed by analysis of the radiation environment around much older M-dwarfs. The evolution of that environment will help us refine the target list for the above missions as we focus on star systems more likely to have life. Given that most of the habitable zone planets in the galaxy will have had to withstand high flare activity, we need to make modeling the effects of flare erosion on atmospheres a high priority task.

The paper is Loyd et al., “HAZMAT. IV. Flares and Superflares on Young M Stars in the Far Ultraviolet,” accepted for publication at the Astrophysical Journal (preprint).