A Signature of Planetary Migration

Earlier in the week I talked about Astronomy Rewind, an ambitious citizen science project dedicated to recovering old astronomical imagery and digitizing it for comparison with new data. Now I’ve learned that another citizen science effort, Planet Finders, is working with simulated data from the Transiting Exoplanet Survey Satellite (TESS), planning to transition into real TESS data as soon as they become available. Have a look at this effort here if you are interested in becoming a beta tester. TESS will be a hugely significant exoplanet mission particularly in terms of nearby stars, so becoming a part of this project should be an exciting venture indeed.

On with today’s post, which I would have actually run yesterday if I had read the paper soon enough, as it offers insights into Wednesday’s entry on protoplanetary disks. As we’ve seen, these can become the discovery grounds for young planets. In the case of the 2-million year old CI Tau, that meant an already confirmed gas giant in a ‘hot Jupiter’ configuration, along with three other gas giants, two of them far from the central star. Hence the question: Where did the hot Jupiter CI Tau b form? Because if it migrated, it did so early in the history of this system. 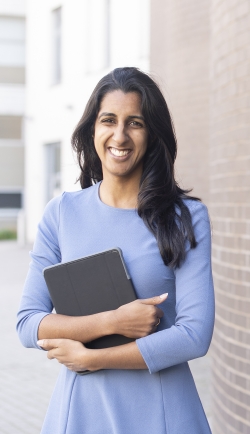 Now we have a separate research effort attempting to show that planet migration within a protoplanetary disk can be identified through markers within the disk itself. The idea is to produce an observational marker that can guide future research and tell us whether, within a given system, a planet is moving inward through the disk or staying within its existing orbit.

Lead author Farzana Meru (University of Warwick, UK), working with colleagues at Cambridge University, describes an observational signature in young stellar system dust rings. As with the CI Tau work, the new study involves the Atacama Large Millimeter/submillimeter Array (ALMA), which is able to probe such disks in intricate detail, revealing structure in the form of clumps, gaps, spiral arms, crescents and rings. Even more to the point, by working at different millimeter frequencies, ALMA can identify clustering material in different particle sizes. 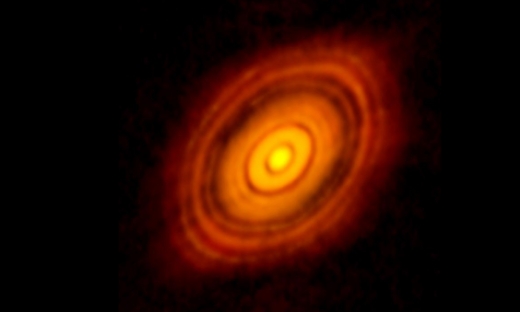 Image: Example of a protoplanetary disk. This is an ALMA image of the young star HL Tau and its disk. The image reveals multiple rings and gaps that herald the presence of emerging planets as they sweep their orbits clear of dust and gas. The image was released Nov. 6, 2014. ALMA (NRAO/ESO/NAOJ); C. Brogan, B. Saxton (NRAO/AUI/NSF).

The question, then, is what can variations in dust particle size tell us? The researchers perform simulations of movement within a ring of gas and dust in the presence of migrating planets of relatively low mass, from 12 to 60 Earth masses. The results show that the gas pressure profile of the disk varies significantly depending on whether the planet is migrating or stationary.

For larger dust particles, the dust velocity in the disk exterior to the planet’s orbit is high enough to keep up with the pressure perturbation, producing what the authors describe as a ‘dust density enhancement’ in this region. We would thus expect smaller particles in the interior ring, larger particles in the exterior. By studying the inner and outer rings around the planetary orbit at different wavelengths, we should be able to show whether or not the planet is migrating.

We’re talking about small differences indeed — a migrating planet at 30 AU that is 30 times the mass of the Earth should, according to this modeling, be associated with an inner ring consisting of particles less than a millimeter in size, while those in the outer ring would measure slightly over a millimeter. But this is a workable observable, for as ALMA increases the wavelengths at which it observes, the inner dust ring fades while the exterior ring becomes brighter. This is because the emissivity of dust grains depends on the maximum grain size in the mixture.

Image: This is the paper’s Figure 7. Caption: “Dust density rendered simulation image of the disc with a 30M⊕ migrating planet at Rp = 0.75 for dust with Stokes numbers of 0.02 (left) and 0.2 (right). The small dust forms a ring interior to the planet while the large dust forms a ring exterior to it.” The ‘Stokes number’ refers to the movement of particles in flow. What is significant here is the separation of small- and large-particle dust accumulations. Credit: Meru et al.

The movement of the dust is the key. In the inner ring, we are seeing smaller particles because these move inwards more slowly than the planet itself, accumulating in the inner ring, while large dust particles are found in the exterior ring because they move at higher velocity than the smaller particles and keep pace with the planet in its movement inward. Over time, the composition of the two rings is distinctive enough to become an ALMA observable.

We’re entering an era when protoplanetary disks are becoming the subject of intense scrutiny thanks to facilities like ALMA, along with the Spectro- Polarimetric High-contrast Exoplanet REsearch (SPHERE) instrument on the Very Large Telescope (VLT) and the Gemini Planet Instrument (GPI) on the Gemini Telescope. And we’re learning that most such disks show sub-structure susceptible to such analysis. We need observational benchmarks like these because a hot Jupiter like CI Tau’s can be the result of migration, but it could also achieve its tight orbit because of gravitational interactions early in the development of the system.

Applying observational constraints to planetary migration could become a potent tool in untangling a young system’s evolution. The work is promising but still in its early stages. In principle, write the researchers, “…it may be possible to use the location of dust rings in order to detect planetary migration, although the feasibility of this measurement is yet to be established.”

The paper is Meru et al., “Is the ring inside or outside the planet?: The effect of planet migration on dust rings,” accepted at Monthly Notices of the Royal Astronomical Society (preprint).