A Thermal Map of Europa (& an Intriguing Anomaly)

Europa stays in this news this morning as we continue to correlate recent observations with the invaluable results of the Galileo mission. Hubble data have played a role in this, with researchers identifying plume activity in 2013 that recalled the geysers of Enceladus, a possible indication of venting from the subsurface ocean. But analysis of Cassini data from its 2001 Jupiter flyby enroute to Saturn showed no evidence of plume activity through its ultraviolet imaging spectrograph (UVIS).

So what exactly did Hubble see? Yesterday’s post highlighted Julie Rathbun’s contention that if they are there, Europan plumes show no thermal signature in Galileo data, while Xianzhe Jia (University of Michigan) and the SETI Institute’s Melissa McGrath have used Galileo magnetometer data to support possible plume activity. We may need Europa Clipper to resolve the matter.

Now the 66 dish antennas of the Atacama Large Millimeter/submillimeter Array (ALMA) have been turned on Europa in an attempt to study the entire moon — not just the areas of possible plume activity — to develop a thermal model. The data allow us to find what the authors of the paper on this work describe as “significant thermal structure.” What we get out of this is the ability to construct a global map showing the varying heat signatures across this remote world, in the process revealing an unusual cold spot on Europa’s northern hemisphere.

“These ALMA images are really interesting because they provide the first global map of Europa’s thermal emission,” said Samantha Trumbo, a planetary scientist at the California Institute of Technology and lead author on a paper published in the Astronomical Journal. “Since Europa is an ocean world with potential geologic activity, its surface temperatures are of great interest because they may constrain the locations and extents of any such activity.” 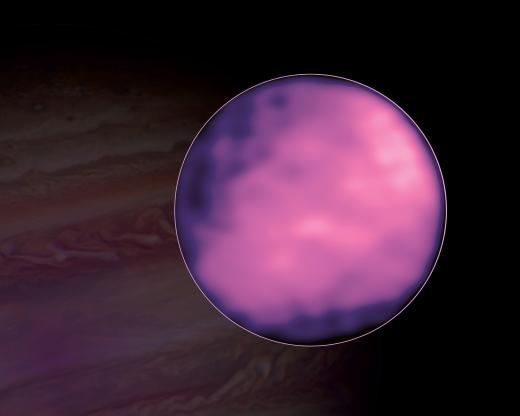 ALMA’s ability to detect Europa’s thermal ‘glow’ is remarkable given that its surface temperature is never warmer than about minus 160 degrees Celsius, but this is an instrument that can provide insights into not just Jovian moons but asteroids and comets as well. On Europa, ALMA’s images have a resolution of 200 kilometers. Learning more about Europa’s surface can give us insights into its geological processes, especially interesting given that this surface is comparatively young, an indication of thermal or geological activity that has yet to be identified.

Trumbo and colleagues developed their global thermal model of Europa based on the ALMA observations, folding in an albedo map constructed from Voyager measurements and factoring in Galileo data. As for that odd cold spot on Europa’s northern hemisphere, it stands out on the ALMA maps near 90 degrees West and 23 degrees North. It also appears in two different images at two different times of day, an indication that it is genuinely distinct in its thermal properties. Moreover, Galileo may not be able to help us here, as the paper explains:

This region coincides with the location of highest water ice abundance mapped by Brown & Hand (2013) and the location suggested to have the most crystalline water ice by Ligier et al. (2016). However, it does not correspond to any particular geologic unit (Leonard et al. 2017) or any unusual visible morphological or albedo features (USGS 2002). The anomaly is located within a region of relatively low-resolution imaging and was not covered by the published Galileo PPR [Photopolarimeter-Radiometer] data, so it is possible that a corresponding morphological, geologic, or thermal feature was simply not seen by Galileo.

What to make of it? Except for discrepancies like this one, the model the authors work with reproduces the thermal structure seen by ALMA, an indication that we are seeing the results of albedo variation across the surface and the absorption and re-emission of sunlight. However, they find little correlation between the heat signatures and surface geology except for the area around Pwyll crater (this is similar to crater ejecta data elsewhere in the Solar System, which also show a distinctive signature). The cold spot referenced above remains enigmatic and will await future ALMA observations.

An afterword on Pwyll crater, which has been associated with possible plume activity: The ALMA map shows that Pwyll has a “locally elevated thermal inertia.” What this means is that this area takes longer to reach equilibrium with local temperature change than areas around it. Various factors are at play here, including density and thermal conductivity. Of particular interest is that the ‘cold spot’ anomaly is almost directly on the other side of Europa from Pwyll.

There is an analogy here with our own Moon, and the association with geological features on it that are directly opposite, or antipodal, to Tycho crater. But that is about as far as we can go with existing data. “Unfortunately,” the authors write, “without new, high-resolution imaging, the potential association of this feature with unique geology will likely remain an open question.”