Game-Changer: A Pluto Orbiter and Beyond

To say that the Space Science and Engineering Division at Southwest Research Institute has been busy of late is quite an understatement. Alan Stern, principal investigator for New Horizons, has been leading an SwRI study examining just how we might operate an orbiter at Pluto/Charon, with results that are surprising and encouraging for the future of such a project.

Working with spaceflight engineer and mission designer Mark Tapley and planetary scientist Amanda Zangari, as well as project manager John Scherrer and software lead Tiffany Finley, Stern has been looking at an orbital tour of Pluto built around a series of gravity assist maneuvers involving Charon, its large moon. The mission would use the kind of electric propulsion system we saw in the Dawn mission to Vesta and Ceres, and by clever use of gravity assists, would pull off another Dawn feat by leaving Pluto once its orbital operations were concluded and moving into the Kuiper Belt for encounters with further objects. 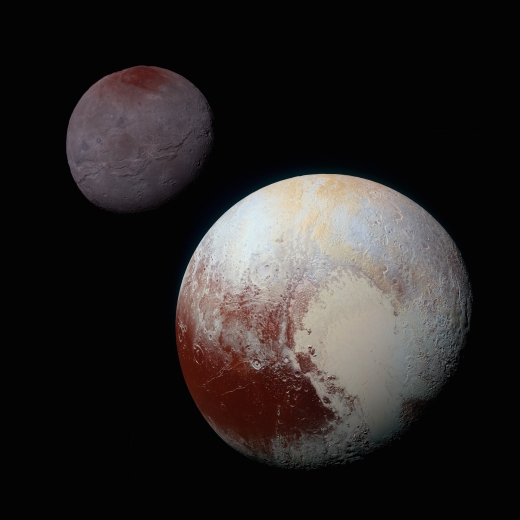 Image: NASA’s New Horizons mission made the first exploration of Pluto-Charon and its system of small moons in 2015. The scientific discoveries led the science community to push for a return to Pluto with an orbiter or to explore other dwarf planets in the Kuiper Belt. Credit: NASA/JHUAPL/SwRI.

The news comes out of a workshop on Pluto and Kuiper Belt exploration held at the American Astronomical Society’s Division for Planetary Sciences meeting in Knoxville, Tennessee. Gravity assists from Charon save propellant, making it possible to continually change the orbiter’s track over Pluto while studying its surface and atmosphere, as well as its system of moons. Several years in such an adjustable orbit would allow us to home in on major discoveries from New Horizons while also uncovering numerous other features that spacecraft did not see.

But it’s also the move into the Kuiper Belt that has Stern’s attention. It makes a Pluto orbiter of this design a multi-purpose spacecraft and leverages our growing experience with ion propulsion. Says Stern:

“This is groundbreaking. Previously, NASA and the planetary science community thought the next step in Kuiper Belt exploration would be to choose between ‘going deep’ in the study of Pluto and its moons or ‘going broad’ by examining smaller Kuiper Belt objects and another dwarf planet for comparison to Pluto. The planetary science community debated which was the right next step. Our studies show you can do both in a single mission: it’s a game changer.”

As analyzed by Tiffany Finley, the orbital tour, still being optimized, would allow dozens of gravity assists at Charon, offering a series of flybys of Pluto’s smaller moons as well as close encounters with Charon itself. Finley talks about studying Pluto’s polar and equatorial regions using plane changes enabled by these maneuvers, including sampling the dwarf planet’s atmosphere. A final Charon gravity assist would take the orbiter into the Kuiper Belt.

And Mark Tapley’s work on electric propulsion ups the ante. He’s arguing that not only would this craft be able to perform flybys of Kuiper Belt objects, but that it could even enter orbit around a second dwarf planet in the Kuiper Belt, just as Ceres followed Vesta for Dawn. 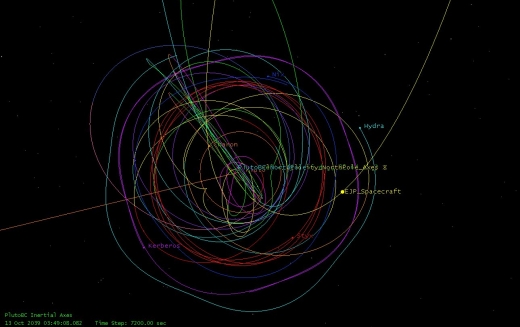 What sort of missions are we talking about? Amanda Zangari’s separate study for this group has looked at the 45 largest Kuiper Belt objects and dwarf planets (covering “the most desirable and scientifically interesting targets”) with launches possible between 2025 and 2040. How these trajectories might be accomplished is presented in a paper that has been accepted by the Journal of Spacecraft and Rockets. From the paper, this is a bit of an eye-opener:

There is a KBO mission possible for every Earth-Jupiter launch window throughout a Jupiter revolution, thus Pluto and every one of the selected 45 KBOs are accessible via Jupiter gravity assist with a flight time of under 25 years and a C3 [excess launch energy] less than 140 km2/s2. Many, but not all objects can be reached via Saturn flyby, and a smaller list still can be compatible with a visit to an ice giant, though it does not necessarily provide a TOF [time of flight] advantage.

Which leads to this:

Working out the best targets will be critical, for as the paper goes on to note:

We have not considered multiple KBO flybys. It is worth noting that the prospect of an additional flyby of a KBO after Pluto played a large role in New Horizons’ selection, and that it was possible because of Pluto’s proximity at the time to the plane of the Solar System. Many of our KBOs have highly inclined orbits and are often far outside the plane of the Solar System at the time of flyby, thus no additional flybys will be possible en route owing to the vast separations between objects. To probe a second KBO typically requires one to fly through the classical belt. 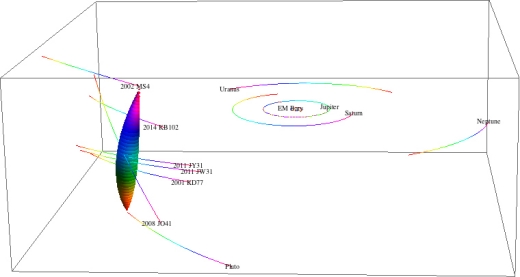 We’ll need a good name for the Pluto orbiter/Kuiper Belt explorer mission, so start thinking about it now as we begin hoping that such a mission will be funded. Back to Stern for the conclusion:

“Who would have thought that a single mission using already available electric propulsion engines could do all this? Now that our team has shown that the planetary science community doesn’t have to choose between a Pluto orbiter or flybys of other bodies in the Kuiper Belt, but can have both, I call this combined mission the ‘gold standard’ for future Pluto and Kuiper Belt exploration.”

The team’s paper on spacecraft trajectories at Pluto/Charon and beyond is Zangari et al., “Return to the Kuiper Belt: launch opportunities from 2025 to 2040,” accepted at the Journal of Spacecraft & Rockets (preprint).

Previous post: A Thermal Map of Europa (& an Intriguing Anomaly)