The Stripes of Dione

Usually when we talk about outer planet moons with oceans, we’re looking at Jupiter’s Europa, and Saturn’s Enceladus. But evidence continues to mount for oceans elsewhere. In the Jupiter system alone, Callisto and Ganymede are likewise strong candidates, while Saturn’s Titan probably has a layer of liquid water. Pluto’s moon Charon may possess an ocean of water and ammonia, to judge from what appears to be cryovolcanic activity there. At Neptune, Triton’s high-inclination orbit should produce plenty of tidal heating that may support a subsurface ocean.

Let’s pause, though, on another of Saturn’s moons, Dione. Here we have evidence from Cassini that this world, some 1120 kilometers in diameter and composed largely of water ice, has a dense core with an internal liquid water ocean, joining Enceladus in that interesting system. But what engages us this morning is not liquid water but a set of straight, bright stripes discovered on the surface and discussed in a new paper from Alex Patthoff (Planetary Science Institute) and Emily Martin (Center for Earth and Planetary Studies, Smithsonian Institution).

The term being used for these lines is linear virgae, linear ‘stripes’ of color, that are apparently the result of interactions with Saturn’s rings and, possibly, the co-orbital moons Helene and Polydeuces (the latter follows Dione at its trailing Lagrangian point, the former orbiting at the leading L4 Lagrangian point).

“The evidence preserved in the linear virgae has implications for the orbital evolution and impact processes within the Saturnian system,” says Patthoff. “Plus, the interaction of Dione’s surface and exogenic material has implications for its habitability and provides evidence for the delivery of ingredients that may contribute to the habitability of ocean worlds in general.” 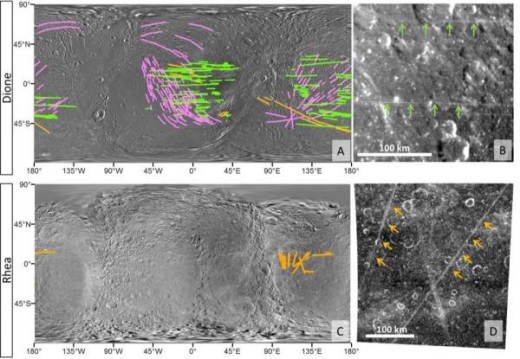 The linear virgae on Dione range between 10 and hundreds of kilometers in length and less than 5 kilometers in width, showing up as substantially brighter than the surrounding terrain. Interestingly, they’re also parallel and appear to overlay other surface features, an indication of their relative youth compared to surrounding topography. Patthoff again:

“Their orientation, parallel to the equator, and linearity are unlike anything else we’ve seen in the solar system. If they are caused by an exogenic source, that could be another means to bring new material to Dione. That material could have implications for the biological potential of Dione’s subsurface ocean.”

Thus we have another potential habitat for biology beneath an icy moon’s crust. Cassini imagery showed inactive fractures at Dione similar to those found at Enceladus, and the spacecraft’s magnetometer also detected a faint particle stream coming from the moon. In 2013, Noah Hammond (Brown University) and colleagues examined the Janiculum Dorsa mountain and ridgeline in Cassini data, finding that the moon’s crust seemed to have flexed beneath the mountain, an indication of a subsurface ocean and warm crust at least at the time the area formed. Why Enceladus is so active in comparison to Dione is an open question. 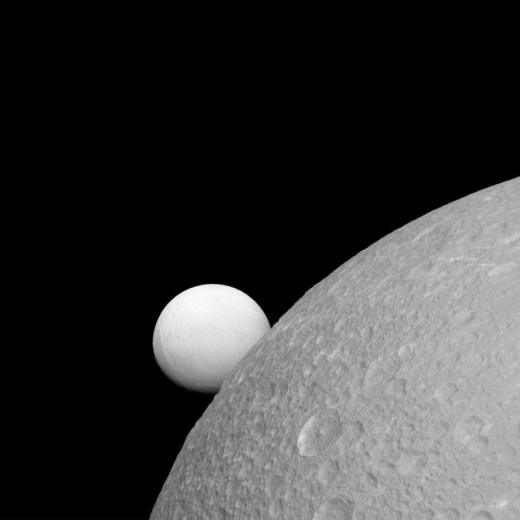 Image: Although Dione (near) and Enceladus (far) are composed of nearly the same materials, Enceladus has a considerably higher reflectivity than Dione. As a result, it appears brighter against the dark night sky. The surface of Enceladus (504 kilometers across) endures a constant rain of ice grains from its south polar jets. As a result, its surface is more like fresh, bright, snow than Dione’s (1123 kilometers across) older, weathered surface. As clean, fresh surfaces are left exposed in space, they slowly gather dust and radiation damage and darken in a process known as “space weathering.” This view looks toward the leading hemisphere of Enceladus. North on Enceladus is up and rotated 1 degree to the right. The image was taken in visible light with the Cassini spacecraft narrow-angle camera on Sept. 8, 2015. Credit: NASA/JPL-Caltech/Space Science Institute.

Previous post: Thoughts on the End of the Kepler Mission