SETI in the Infrared

One of the problems with optical SETI is interstellar extinction, the absorption and scattering of electromagnetic radiation. Extinction can play havoc with astronomical observations coping with gas and dust between the stars. The NIROSETI project (Near-Infrared Optical SETI) run by Shelley Wright (UC-San Diego) and team is a way around this problem. The NIROSETI instrument works at near-infrared wavelengths (1000 – 3500 nm), where extinction is far less of a problem. Consider infrared a ‘window’ through dust that would otherwise obscure the view, an advantage of particular interest for studies in the galactic plane.

Would an extraterrestrial civilization hoping to communicate with us choose infrared as the wavelength of choice? We can’t know, but considering its advantages, NIROSETI’s instrument, mounted on the Nickel 1-m telescope at Lick Observatory, is helping us gain coverage in this otherwise neglected (for SETI purposes) band. I had the chance to talk to Dr. Wright at one of the Breakthrough Discuss meetings in Palo Alto, where she made a fine presentation on the subject. Since then my curiosity about infrared SETI has remained high.

Then this morning I came across graduate student James Clark, who has just published a paper on interstellar beacons in the infrared in the Astrophysical Journal. Working at MIT’s Department of Aeronautics and Astronautics, Clark is not affiliated with NIROSETI. He’s wondering what it would take to punch a signal through to another star, and concludes that a large infrared laser and a telescope through which to focus it would be the tools of choice.

The goal: An infrared signal at least 10 times greater than the Sun’s natural infrared emissions, one that would stand out in any routine astronomical observation of our star and demand further study. Clark believes that a 2-megawatt laser working in conjunction with a 30-meter telescope would produce a signal easily detectable at Proxima Centauri b, while a 1-megawatt laser working through a 45-meter telescope would produce a clear signal at TRAPPIST-1.

But nearby stars are just the beginning, for in Clark’s view, either of these setups would produce a signal that could be detected up to 20,000 light years away, almost to galactic center. All of this may remind you of Philip Lubin’s work, recently described here, on laser propulsion. Depending on the system in play, one of Lubin’s DE-STAR 4 beams would be observed as the brightest star in the sky from 1000 light years away (see Trillion Planet Survey Targets M-31 for more on this). The NIROSETI website makes the same observation about laser visibility:

The most powerful laser beams ever created (e.g. LFEX) can produce optical pulses with 2 petawatts (2.1015W) peak power for an incredibly short duration, approximately one picosecond. Such lasers would outshine our sun by several order of magnitudes if seen by a distant receiver. It can be shown that strong pulsed signals at nanosecond (or faster) intervals can be distinguishable from any known astrophysical sources. 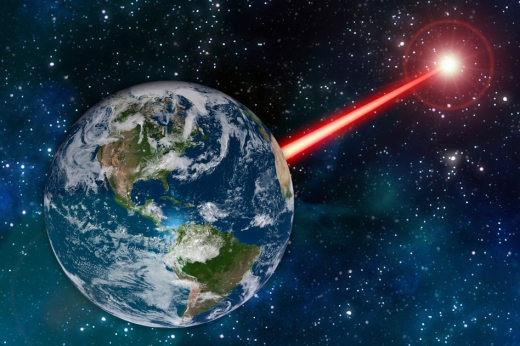 Image: An MIT study proposes that laser technology on Earth could emit a beacon strong enough to attract attention from as far as 20,000 light years away. Credit: MIT.

The kind of system Clarke is talking about is not beyond our capabilities even now:

“This would be a challenging project but not an impossible one,” Clark says. “The kinds of lasers and telescopes that are being built today can produce a detectable signal, so that an astronomer could take one look at our star and immediately see something unusual about its spectrum. I don’t know if intelligent creatures around the sun would be their first guess, but it would certainly attract further attention.”

In terms of current capabilities, we can think about Clark’s 30-meter telescope in relation to plans for telescopes as huge as the 39-meter European Extremely Large Telescope, now under construction in Chile, or the likewise emerging 24-meter Giant Magellan Telescope. How and where to build such a laser is the same sort of issue now being analyzed by Breakthrough Starshot, which conceptualizes a series of small lightsail missions to nearby stars using laser beaming. Caveats include safety issues for both humans and spacecraft equipment. Clark suggests the far side of the Moon would be the ideal place for such an installation.

With METI (Messaging to Extraterrestrial Intelligence) continuing to be controversial, to say the least, whether or not we would ever choose to build an infrared laser as an interstellar beacon is up for question. But Clark’s analysis takes in the question of whether today’s technologies could detect such a signal if a civilization elsewhere put it into play and tried to communicate with us. As we’ve seen in other discussions of interstellar beacons, detection is highly problematic.

“With current survey methods and instruments, it is unlikely that we would actually be lucky enough to image a beacon flash, assuming that extraterrestrials exist and are making them,” Clark says. “However, as the infrared spectra of exoplanets are studied for traces of gases that indicate the viability of life, and as full-sky surveys attain greater coverage and become more rapid, we can be more certain that, if E.T. is phoning, we will detect it.”

We don’t know whether E.T. does astronomical surveys, but we know we do, and we are rapidly moving toward the study of small, rocky exoplanets through the spectra of their atmospheres. Thus Clark’s paper could be seen as a reminder to astronomers that an unusual signal could lurk within their infrared data, one that we should at least be aware of and prepared to analyze. A conversation between nearby stars at a data rate of a few hundred bits per second could eventually result.

The paper is Clark, “Optical Detection of Lasers with Near-term Technology at Interstellar Distances,” Astronomical Journal Vol. 867, No. 2 (5 November 2018). Abstract.