We’ve long been interested in how the Earth got its oceans, with possible purveyors being comets and asteroids. The idea trades on the numerous impacts that occurred particularly during the Late Heavy Bombardment some 4.1 to 3.8 billion years ago. Tuning up our understanding of water delivery is important not only for our view of our planet’s development but for its implications in exoplanet systems with a variety of different initial conditions. 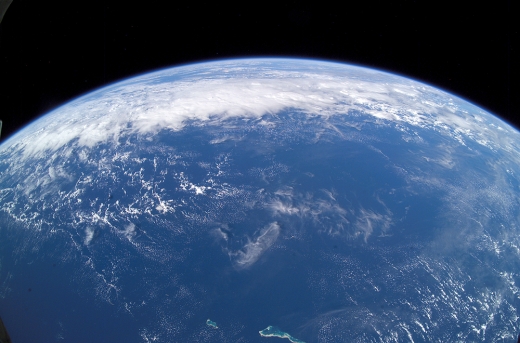 Image: This view of Earth’s horizon was taken by an Expedition 7 crewmember onboard the International Space Station, using a wide-angle lens while the Station was over the Pacific Ocean. Credit: NASA.

But the picture becomes more complex when we compare regular hydrogen atoms (one proton, one electron) with ‘heavy hydrogen,’ or deuterium atoms. The latter have a neutron in addition to a proton in the nucleus. A recent paper in the Journal of Geophysical Research digs into isotope ratios, the ratio of deuterium to ordinary hydrogen atoms, commonly referred to as the D/H ratio. One reason asteroids are favored by some scientists as the likely source of the bulk of Earth’s water is that asteroidal water has a D/H in the neighborhood of 140 parts per million. Contrast that with cometary water, which runs from 150 ppm to as high as 300 ppm.

When we examine Earth’s oceans, we find a D/H ratio close to that found in asteroids. The new study, from Jun Wu and colleagues at the School of Molecular Sciences and School of Earth and Space Exploration at Arizona State University, takes aim at the asteroid explanation, not by way of discounting it but rather of finding other sources making a contribution to Earth’s water.

“It’s a bit of a blind spot in the community,” said ASU’s Steven Desch, a co-author of the new study. “When people measure the [deuterium-to-hydrogen] ratio in ocean water and they see that it is pretty close to what we see in asteroids, it was always easy to believe it all came from asteroids.”

We are learning, however, that too uncritical an acceptance of D/H ratios may oversimplify the issue. For the hydrogen in Earth’s oceans is not necessarily representative of hydrogen deeper inside the planet, where D/H ratios close to the boundary between the core and mantle show considerably less deuterium. This may indicate a non-asteroidal source for at least some of the hydrogen.

Another telling point is that helium and neon, showing isotopic signatures inherited from the original solar nebula, have also been found in Earth’s mantle. Contrasting hydrogen at the core-mantle boundary with what we see in Earth’s oceans and factoring in these noble gases may change our thinking. The Wu study considers the formation of the planets in the earliest days of the Solar System, when small, often colliding planetary embryos up to the size of Mars went through gradual planetary accretion.

The new model works like this: As larger embryos formed largely from water-laden asteroids, they began to develop into planets. On Earth, decaying radioactive elements melted iron within the emerging world, pulling in asteroidal hydrogen and sinking to form a core. Collisions among planetesimals would meanwhile have created enough energy to melt the surfaces of the larger embryos like the Earth into magma oceans.

Hydrogen and noble gases from the solar nebula would be drawn in to create an early atmosphere. The nebular hydrogen, lighter than asteroidal hydrogen, would have dissolved into the molten iron of the magma ocean, eventually being drawn into the mantle, along with hydrogen from other sources.

What the authors argue is that this process created a slight enrichment of hydrogen in the molten iron and left a higher ratio of deuterium behind in the magma (the process is called isotopic fractionation). Hydrogen is attracted to iron, while the heavier isotope, deuterium, less attracted to iron, would have remained in the magma which would eventually become Earth’s mantle. We would end up with lower D/H ratios in the core than in the mantle and oceans. The authors argue that while most of Earth’s water is asteroidal, some of it did in fact come from the solar nebula. 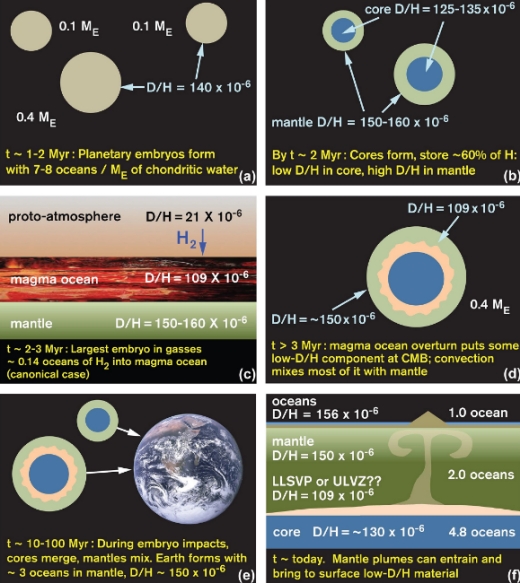 The process is complex, and also takes in impacts from smaller embryos and other objects that continued to add water and mass until Earth reached its final size. The authors provide this synopsis as their caption for Figure 1 (above), which I’ll reproduce verbatim but break into sections for reasons of readability:

Wu says this: “For every 100 molecules of Earth’s water, there are one or two coming from [the] solar nebula.” But we now see the potential for including gas left over from the formation of our Solar System in the question of water delivery and accumulation. In other stellar systems where water-bearing asteroids may not be as abundant, this implies that water could still be in place from the system’s own stellar nebula. Wu adds: “This model suggests that the inevitable formation of water would likely occur on any sufficiently large rocky exoplanets in extrasolar systems. I think this is very exciting.”

Our comprehensive model for the origin of Earth’s water considers, for the first time, the effects of isotopic fractionation as hydrogen dissolved into metal and was sequestered into the core. Based on the behaviors of proxies, we consider it likely that the D/H ratio of the core is ~10% lighter than the mantle. We hypothesize that Earth accreted a few to tens of oceans of water from chondrites, mostly carbonaceous chondrites. Drawing on the latest theories of planet formation, which argue for rapid (<2 Myr) formation of planetary embryos, we favor ingassing of a few tenths of an ocean of solar nebula hydrogen into the magma oceans of the embryos that formed Earth.