Over the sound system in the grocery store yesterday, a local radio station was recapping events of the day as I shopped. The newsreader came to an item about the Parker Solar Probe, then misread the text and came out with “The probe skimmed just 15 miles from the Sun’s surface.” Yipes!

I was in the vegetable section but you could hear him all over the store, so I glanced around to see how people had reacted. Nobody as much as raised an eyebrow, which either says people tune out background noise as they shop or they have little knowledge of our star.

The correct number is 15 million miles (24,1 million kilometers), and it’s still a hugely impressive feat, but I hope the station got the story right later on. I go easy on this kind of thing because it’s easy enough to make a mistake when reading radio copy (I’ve done this myself). Anyway, there is always some listener who calls it in, which I should have but didn’t. I was pushed for time that morning, making choices about squash and rutabagas and thinking about close approaches. 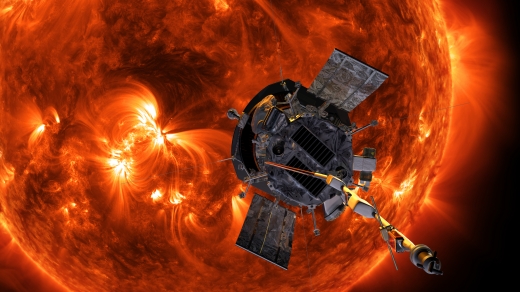 Image: Artist’s concept of the Parker Solar Probe spacecraft approaching the sun. The spacecraft will provide new data on solar activity and make critical contributions to our ability to forecast major space-weather events that impact life on Earth. Credit: NASA/JHU/APL.

After the Parker Solar Probe’s close pass, the spacecraft has gone nearer the Sun than any other craft. The Helios B probe was the previous recorder holder, setting the mark back in 1976. Helios B reached perihelion in April of 1976 at a distance of 43.4 million kilometers (26.9 million miles), inside the orbit of Mercury. A record the Parker probe surpassed with ease.

And the good news about Parker, reflected in the faces in the image below, is that the craft handled the heat and solar radiation without damage. Four status beacon signals are available, the best being the A signal that was received by mission controllers at JHU/APL on the late afternoon of November 7. Our latest mission to the Sun is live and collecting data. 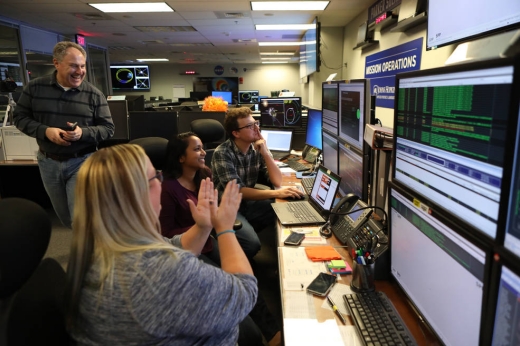 Parker is also setting speed records. Again we turn to Helios-B as the previous record-holder, at 70.2 km/s (157,078 mph). At perihelion on November 7, the Parker spacecraft reached 213,200 miles per hour, or 95.3 kilometers per second. By way of comparison, Voyager 1 moves at approximately 17 kilometers per second as it continues to push into interstellar space. Still in the heliosheath, sister spacecraft Voyager 2 is at a slightly more sedate 15.4 km/sec.

But back to the Parker Solar Probe, whose Sun-facing Thermal Protection System, an 11-centimeter thick carbon-carbon composite shield, reached about 820 degrees Fahrenheit, or 437 degrees Celsius. This is just the beginning, for the spacecraft will continue making closer and closer approaches in the course of its 7-year mission. 24 passes by the Sun are anticipated. The spacecraft will eventually close to a scorching 6.2 million kilometers from our star.

Deep space implications? The Parker Solar Probe’s findings will teach us much about the plasma flow leaving the Sun, a solar ‘wind’ that may offer future magnetic sails (magsails) one option for reaching high velocities within the Solar System (though we first must determine whether this highly variable flow can be efficiently exploited by future magsail designs).

The other implication is using a close solar pass in a ‘sundiver’ mission, accelerating a large payload that would be flung outbound in a spectacular gravitational assist, reaching velocities in the hundreds of kilometers per second. We’ll gain a great deal of knowledge about operations close to the Sun through the performance of Parker’s heat shield, all of which should be helpful if we do decide to explore sundiver options for reaching into the Kuiper Belt and beyond.