When astronomers talk about metals, they’re using the term in a specific sense. A metal in stellar terms is any element heavier than helium. Thus iron, silicon, magnesium and carbon qualify, all elements that are components of small, rocky planets. It was iron that John Michael Brewer (Yale University), Debra Fischer and colleagues singled out as a proxy in their recent work on the metal content of exoplanet systems. The work focuses specifically on compact, multi-planet systems as one of several system architectures found in close orbit of a host star.

What’s interesting here is that these domains seem mutually exclusive, or almost so. Unlike our Solar System, a system with multiple planets on tight orbits can squeeze its worlds into a region as close as Mercury. Likewise near the host star, we sometimes find massive planets in close orbits, known as ‘hot Jupiters.’ Few of these have close planetary neighbors, and few compact multi-planet systems have massive planets.

And there is another distinguishing factor. Where the relatively uncommon hot Jupiters appear, they are most numerous around stars with high metallicity, whereas small worlds appear around stars with a wide range of metallicity. Do systems lighter in metals have problems creating larger planets? The jury is still out, but some studies have made an association between low metallicity and small planet formation that Brewer and Fischer now strengthen in this new work. 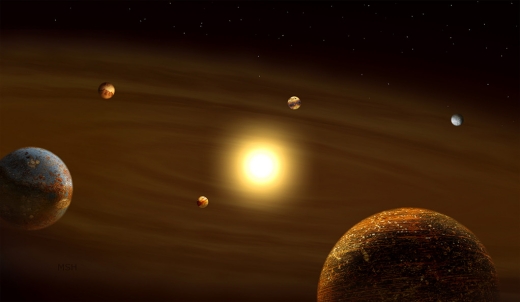 The researchers compared systems of a particular architecture to all known planet hosts as a function of metallicity, adding in a third architecture, systems with cool Jupiters (orbiting further than 0.3 AU from the host star). They identified in their sample 104 hot Jupiter systems, 87 cool Jupiter systems and 105 compact multi-planet systems. The latter were defined as systems with three or more planets orbiting closer than 1 AU. Note that only one hot Jupiter system is found in a compact multi-planet system, while nine cool Jupiters are found in compact systems.

The abundance of compact, multi-planet systems around stars of low metallicity that emerges is clear and points in interesting directions. Many more of these systems may exist than we have assumed. Bear in mind that such worlds are a tricky catch for radial velocity methods, but because they tend to be co-planar, they can be spotted in transit searches, which can observe transits of multiple worlds. We seem to be in a very early phase of compact system detection.

It was Fischer who demonstrated over a decade ago that higher metallicity stars were the most likely to form large gas giants, in work that supported the core accretion model of gas giant planet formation. But smaller systems have been more difficult.

“Our surprising result, that compact systems of multiple, small planets are more likely around lower metallicity stars suggests a new, important clue in understanding the most common type of planetary system in our galaxy,” said co-author Songhu Wang, a 51 Pegasi b Fellow at Yale.

Standing out in this work is the apparent connection between iron and silicon. The researchers found a high silicon-to-iron ratio in stars with lower metallicity. Moreover, low-metallicity stars are long-lived, offering older, potentially habitable worlds whose longevity may make them prime targets for astrobiology. We are likely to learn that such systems are common. From the paper:

Stars of lower metallicity and higher Si/Fe [silicon to iron] ratios are generally older or members of the galactic thick-disk population (Kordopatis et al. 2015). This could point to a changing mix of planet architectures based on formation time and location. In fact, one of the oldest verified and low-metallicity planet hosts, Kepler-444, is home to a compact multi-planet system (Campante et al. 2015). New high-precision radial velocity surveys looking for Earth-massed planets (Jurgenson et al. 2016; González Hernández et al. 2017) may find a much larger population of small planets around these lower-metallicity stars.

Fischer, in this Yale University news release, likens the ratio of silicon to iron to a “thermostat for planet formation. As the ratio increases, nature is dialing up the formation of small, rocky planets.” 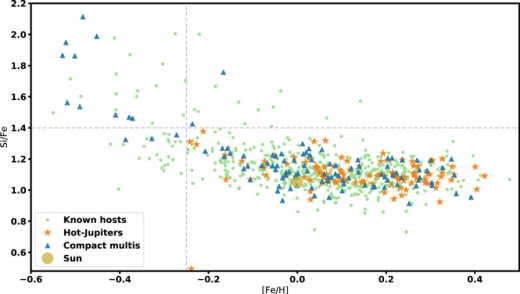 Image: This is Figure 2 from the paper. Caption: Stars with low metallicity or a high ratio of Si/Fe do not seem to form hot Jupiters, and are increasingly likely to host compact multi-planet systems. Plotted here are planet-hosting main sequence stars from our sample (green points), comparing the Si/Fe ratio to the log solar relative iron abundance, [Fe/H], with hot Jupiters (orange stars) confined to the lower right-hand side of the plot and compact multi-planet systems (blue triangles) making up a large fraction of the upper-left region. The Sun (yellow circle) is plotted for reference and the dashed lines are drawn to highlight the different populations. Stars with both high Si/Fe and high [Fe/H] are thought to be from the galactic thick-disk and are poorly represented in most planet search samples due largely to their greater distance. Credit: Brewer et al.

Exciting stuff, because we are moving into an era when new instruments like the Extreme Precision Spectrometer (EXPRES) developed by Fischer’s team at Yale, not to mention next-generation ground- and space-based resources, will make it more likely that we can find compact multi-planet systems where no transits occur.