The detection of a planet around Barnard’s Star really hits home for me. No, this isn’t a habitable world, but the whole topic of planets around this star has resonance for those of us who remember the earliest days of exoplanet study, which could be extended back to Peter van de Kamp’s work at Swarthmore’s Sproul Observatory in Pennsylvania. The astronomer thought he had found evidence for a 1.6 Jupiter mass planet in a 4.4 AU orbit there, based on what he interpreted as telltale wobbles in photographic plates of the star taken between 1916 and 1962.

This work, ending in the early 1970s, turned out to be the result of errors in the instrument van de Kamp was using, but the buzz about possible planets around Barnard’s Star had been sufficient to create a small crest of enthusiasm for exoplanet studies in general. The British Interplanetary Society saw in Barnard’s Star a target worth investigating, and designed their Daedalus star probe around a mission there. In any case, van de Kamp’s assumption that planetary systems were common has been proven out, and now we do have a planet around this star, though not the one that the Swarthmore researcher thought he had found.

What Guillem Anglada-Escudé (Queen Mary University, London) and Ignasi Ribas (Institute of Space Studies of Catalonia and the Institute of Space Sciences, CSIC in Spain) have uncovered is a super-Earth in an orbit near the star’s snowline. From the paper in Nature:

Here we report that the combination of numerous measurements from high-precision radial velocity instruments reveals the presence of a low-amplitude but significant periodic signal at 233 days. Independent photometric and spectroscopic monitoring, as well as the analysis of instrumental systematic effects, show that this signal is best explained as arising from a planetary companion. The candidate planet around Barnard’s star is a cold super-Earth with a minimum mass of 3.2 Earth masses orbiting near its snow-line. 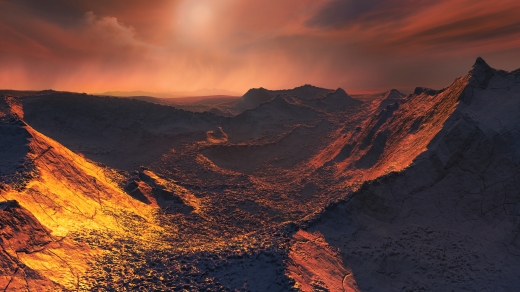 Barnard’s Star b thus becomes the second closest known exoplanet to Earth (although bear in mind that the search for planets around Centauri A and B continues, as does examination of Proxima Centauri for other planets beyond Proxima b). The snow-line at Barnard’s Star, where volatiles like water can condense into solids, is close to the planet’s orbit at 0.4 AU, a reminder that the host is a red dwarf that provides but 2% of the energy the Earth receives from the Sun. The scientists believe the temperature of Barnard’s Star b would be in the range of -150 ℃.

The new planet’s position in relation to the snow-line is itself interesting, as the paper notes:

The candidate planet Barnard’s star b lies almost exactly at the expected position of the snow-line of the system, located at about 0.4 au. It has long been suggested that this region might provide a favourable location for forming planets, with super-Earths being the most common planets formed around low-mass stars. Recent models incorporating dust coagulation, radial drift, and planetesimal formation via the streaming instability support this idea . Although this has yet to be shown to be part of a general trend, observational evidence would significantly constrain theories of planetary migration.

The authors point out that the Barnard’s Star work “…pushes the limits of the radial velocity technique into a new regime of parameter space,” comprising our ability to detect super-Earths in much wider orbits than ever before. Until now, such a detection would have been a matter for gravitational microlensing, with the attendant problem that such studies are inherently one-off affairs, depending on chance celestial alignments. Now we learn of a serious leap forward for radial velocity studies, one that highlights what a tricky catch this was.

“HARPS played a vital part in this project. We combined archival data from other teams with new, overlapping, measurements of Barnard’s star from different facilities. The combination of instruments was key to allowing us to cross-check our result.”

All told, data from seven different instruments were put into play, a total of 771 measurements covering 18 years in a collaboration organized by the Red Dots project, which searches for terrestrial planets in warm orbits around the red-dwarf stars closest to the Sun. It was the Red Dots collaboration that was responsible for the discovery of Proxima Centauri b in 2016.

In addition to HARPS and UVES, the work included data from HIRES (High Resolution Echelle Spectrograph) at the Keck 10-meter telescope; PFS (Planet Finder Spectrograph) at the Carnegie’s Magellan 6.5-m telescope; APF (Automated Planet Finder) at the 2.4-m telescope at Lick Observatory; and CARMENES (Calar Alto high-Resolution search for M dwarfs with Exoearths with Near-infrared and optical Échelle Spectrographs) at the Calar Alto Observatory. Further observations were made with the 90-cm telescope at Sierra Nevada Observatory, the 40-cm robotic telescope at SPACEOBS (San Pedro de Atacama Celestial Explorations), and the 80-cm Joan Oró Telescope of the Montsec Astronomical Observatory (OAdM).

I don’t usually list every last instrument used in a particular detection, but I did so here because it’s a measure of what it took to find a planet of this size in a relatively cool orbit. Consider this: The data show that Barnard’s star is approaching and moving away from us at about 1.2 m/s, which is roughly the speed I make when out for my morning walk. This tiny motion detected through Doppler methods is at the heart of the new planet’s detection. The researchers note that further observations are still necessary and are underway:

“After a very careful analysis, we are over 99% confident that the planet is there, since this is the model that best fits our observations,” says Ignasi Ribas. “However, we must remain cautious and collect more data to nail the case in the future, because natural variations of the stellar brightness resulting from starspots can produce similar effects to the ones detected.” 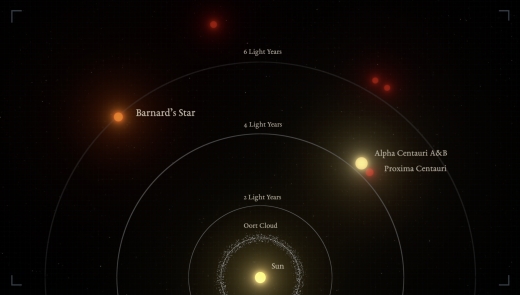 Image: Graphic representation of the relative distances to the nearest stars from the Sun. Barnard’s star is the second closest star system, and the nearest single star to us. Credit: IEEC/Science-Wave – Guillem Ramisa Licence: Creative Commons with Attribution, https://creativecommons.org/licenses/by/4.0/

Barnard’s Star is surely in our future if we reach the stage of sending instrumented probes to other stellar systems. At 6 light years, it is our closest target after the Alpha Centauri stars, and has been famous since its 1916 discovery for its remarkable proper motion of 10.3 arcseconds per year relative to the Sun. What that means is that from our perspective on Earth, this star moves faster against the background stars than any other, covering a distance equivalent to the Moon’s diameter across the sky every 180 years. In comparison to younger M-dwarfs, it is relatively quiet in terms of flare activity. Thought to be about twice the age of our Sun, it’s a reminder of our own star’s position among many stars much older than our Solar System.