Even today, I can well understand the reaction that Dennis Conti had when confronted with the prospect of finding a planet around another star with nothing more than an amateur instrument. Conti, who founded and now chairs the Exoplanet Section of the American Association of Variable Star Observers, was a newcomer to the transit method just a few years ago. “I thought, there’s no way for someone with a backyard telescope to detect a planet going around a distant star,” he says, looking back from the vantage of one now immersed in such observations.

My boyhood 3-inch reflector was not a backyard instrument — too many trees back there. So it became a front-yard telescope. Absent the technological innovations of the past five decades, I could only imagine vast instruments for studying objects around other stars. The transit method in exoplanet detection was a long way off, but the idea of seeing not a planet itself but a change in starlight as the planet crossed the face of its host now seems intuitively obvious. It takes a good deal more than a 3-inch reflector to get into the game, but today’s more sophisticated amateur telescopes can definitely make a contribution, as Conti has demonstrated.

Consider: In 2016, Conti coordinated more than 40 amateur astronomers who would assist a professional scientist in characterizing the atmospheres of 15 different exoplanets. A year later, he would begin teaching a course in observing exoplanets through the AAVSO, one that has taught more than 120 students ranging from professional scientists to high-school teachers. His Practical Guide to Exoplanet Observing, now in its 4th revision, is in use in many countries.

The AAVSO is now building its own Exoplanet Database, a useful entry into the field because the increasing amount of data gathered by amateurs should have a unified home. Many existing databases are built around specific space missions or ground-based surveys. The AAVSO’s entry will be a place where amateur astronomers can archive their exoplanet transit observations to make them available to the broader community. Long-term archiving of observations may turn up interesting features in lightcurves like transit timing variations, that could potentially identify the presence of a second planet in the same observed system. 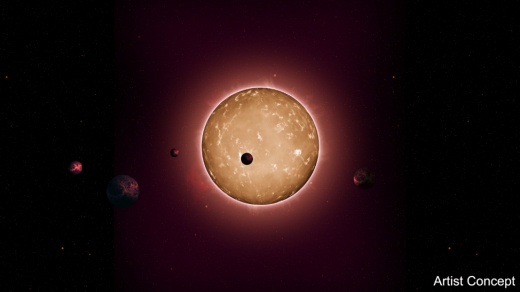 Image: This artist’s concept shows the Kepler-444 planetary system, in which five small planets orbit a distant star. These five planets were detected by the transit method, which involves recording the periodic dimming of a star as a planet transits across its face. Amateur astronomers have been using the same technique to successfully and accurately detect exoplanets for more than a decade, and their observations can now be recorded in the AAVSO’s Exoplanet Database. There, they can be archived long-term and used by professionals and other amateurs to build scientific knowledge of interesting planets. Credit: NASA/JPL-Caltech/AMES/Univ. of Birmingham.

I never followed up with larger home telescopes of my own, but I admire the dedicated amateurs who have plunged into this work. The synergy between amateur and professional can be productive. With TESS (Transiting Exoplanet Survey Satellite) now in operation, we’re reminded that thousands of exoplanet candidates are going to turn up in the next two years. Follow-up observations on the TESS candidates are to be submitted to NASA. The TESS Follow-Up Observing Program is coordinating its efforts with the AAVSO and has adopted its guidelines for best practices, as noted in this AAVSO news release.

“This emphasizes the value that nonprofessionals bring to the field of science,” says Stella Kafka, Ph.D., AAVSO Executive Officer. “People with moderate means can contribute from the ground to the knowledge base of the community. In principle, one can see the AAVSO as an international collaboration between professional and non-professional astronomers, working together to understand some of the most exciting phenomena in the universe.” 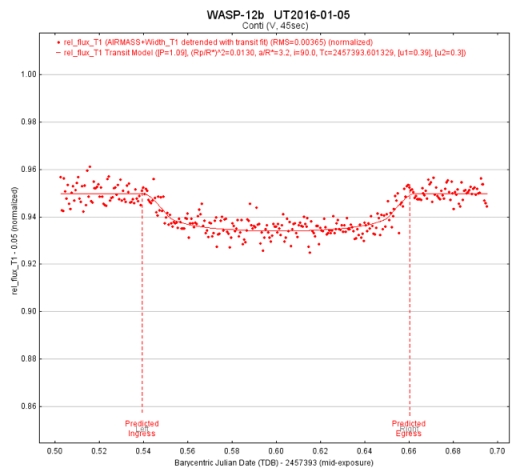 Image: The light curve shown here records the dimming of the exoplanet WASP-12b, taken Jan. 5, 2016, by Dennis Conti, Ph.D., founder and chair of the AAVSO’s Exoplanet Section. Conti used equipment available to amateur astronomers and compared his results to published data to show that he was able to successfully and accurately detect the exoplanet. The AAVSO’s Exoplanet Database will provide a place for amateur astronomers following established procedures to make their exoplanet transit observations available to the broader community of researchers, and to have their data archived long-term. Credit: Dennis Conti.

Many eyes on target with a wide range of instruments are better than a few, and bear in mind that observing an exoplanet transit from different locations and times can help astronomers assemble data on a complete transit that might otherwise be lacking. I’ll also remind non-astronomers with a passion to contribute of the Planet Hunters site, where participants can look at exoplanet data and sort through lightcurves from the Kepler mission. The ways for amateurs to make a contribution to exoplanet science are multiplying.