The outer system object called Chariklo doesn’t get into the news all that much, so I’m glad that this morning I have the chance to give it its place in the Sun. 10199 Chariklo is a Centaur, moving between the orbits of Saturn and Uranus. With an estimated diameter of 250 kilometers, it’s the largest Centaur known, and as far as I know, the first one known to have a ring system. Another Centaur, Chiron, is also suspected of having rings, but on the latter, researchers have not ruled out other explanations for the observed feature, like symmetrical jets of gas and dust.

With Chariklo, we have data from a 2013 occultation of a distant star that revealed the existence of two rings, one 3 kilometers and the other about 7 kilometers wide, separated by about 9 kilometers. Chariklo’s rings have even been given nicknames — Olapoque for the larger, Chui for the smaller, both the names of Brazilian rivers, though the IAU will have the final say on such matters. Of particular interest since the discovery is the question of what keeps a ring system intact around such a small object. The discovery of rings around Haumea deepens the question. 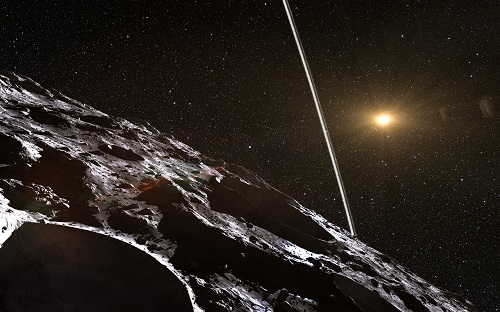 Image: An artist’s impression of the dense and narrow rings around Chariklo. The origin of these rings remains a mystery, but they may be the result of a collision that created a disc of debris. Data from a recent occultation implies that another centaur, Chiron, may also have a ring system, although other explanations are still being examined. Credit: European Southern Observatory.

An interesting new paper speculates that gravity coupled with the odd shapes of both Chariklo and Haumea is the stabilizing factor. At Saturn, we know that so-called ‘shepherd moons’ play a role in stabilizing ring structures. The new work, led by Bruno Sicardy (Observatoire de Paris), focuses on topographical anomalies on the small outer system objects themselves. Co-author Maryame El Moutamid, a research associate in the Cornell Center for Astrophysics and Planetary Science and a member of Cornell’s Carl Sagan Institute, explains:

“Rings appear around Saturn, Jupiter, Neptune and Uranus, but scientists found rings around Chariklo and Haumea within the last few years. Chariklo and Haumea were the first small objects known to have rings, and we think that rings throughout the solar system are more common than we thought. In the case of small bodies Chariklo and Haumea, gravity shepherds the rings. The rings are confined by the gravity because of the shape irregularity of their bodies.”

Thus Chariklo, whose evidently elongated shape includes a large mountain-like feature. The authors believe such topographical anomalies play a role similar to Saturn’s shepherding moons in preventing the ring structure from dissipating. Couple this with the fast rotation of both Chariklo and Haumea, itself an unusually shaped, elongated Kuiper Belt object, and according to the researchers’ simulations, you have all the factors in place to account for ring stability.

So we have a novel mechanism at work here that explains the first ring systems ever found other than those around the giant planets. In contrast to the latter, notes the paper:

…gravitational fields of small bodies may exhibit large non-axisymmetric terms that create strong resonances between the spin of the object and the mean motion of ring particles. Here we show that modest topographic features or elongations of Chariklo and Haumea explain why their rings are relatively far away from the central body, when scaled to those of the giant planets.

The team’s simulations show that these resonances quickly clear out what would have been an early ‘collisional disk’ in the region where the mean motion of the particles matches the object’s spin. Disk material inside this radius falls onto the surface, while material outside the corotation radius is pushed just outside the 1/2 resonance (one rotation of ring particles for every two rotations of the parent body).

Consequently, the existence of rings around non-axisymmetric bodies requires that the 1/2 resonance resides inside the Roche limit of the body, favouring faster rotators for being surrounded by rings.

The Roche limit referenced above refers to the closest a small object can approach the parent body it orbits without being disrupted by tidal forces. The rings, then, stay in place just beyond the Roche limit thanks to the resonances induced partly by unusual topography at the surface.

Next post: An Encouraging Formation Scenario for Icy Moons