It makes sense that planets in other stellar systems would have moons, but so far it has been difficult to find them. That’s why Kepler-1625b, about 8,000 light years out in the direction of Cygnus, is so interesting. As we noted last month, David Kipping and graduate student Alex Teachey have compiled interesting evidence of a moon around this gas giant, which is itself either close to or within the habitable zone of its star. The massive candidate exomoon is the size of Neptune, and if confirmed, would mark the first exomoon detection in our catalog.

As the examination of Kepler-1625b and its transit timing variations continues, we have new work out of the University of Zürich, ETH Zürich and NCCR PlanetS that adds weight to the assumption that moons around large planets should be ubiquitous. Using computer simulations run at the Swiss National Supercomputing Centre (CSCS) in Lugano, a team of researchers led by Judit Szulágyi (University of Zurich and ETH Zurich) has determined that both gas giants and ice giants like Neptune and Uranus will produce moon-bearing circumplanetary disks. 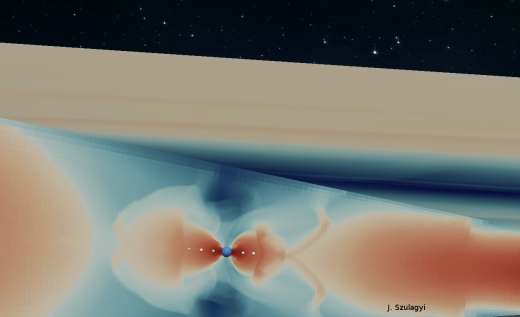 Image: One of the computer simulations on the formation of moons (white bodies) around Neptune (blue sphere). Credit: Judit Szulágyi.

The issue is given point by the difference between Neptune and Uranus when it comes to moons. The five major moons of Uranus do not seem out of place when compared to what we see around Jupiter and Saturn. But we seem to see a different formation history at Neptune, whose solitary major moon, Triton, may well have been captured from the Kuiper Belt.

Szulágyi and team wondered whether the moons of Uranus were not themselves outliers, perhaps formed through a collision in the early days of the Solar System. Our own Moon is thought to have been the result of just such an ancient catastrophe. But the simulations the researchers ran pointed to both Uranus and Neptune originally having their own moon-forming disk of gas and dust. In each case, the simulations produced icy moons. This is a useful result as it has been widely believed that the two ice giants were too light to form such a disk.

The implication: Neptune was itself once orbited by a system of icy moons much like that of Uranus, one that would have been disrupted during the capture of the massive moon Triton. Bear in mind that Triton contains 99 percent of the mass of Neptune’s entire satellite system. The authors point to an earlier study showing that the capture of Triton would only have been possible if Neptune originally had a moon system with the mass of the Uranian moons.

We investigated CPD [circumplanetary disk]- and moon-formation around Uranus and Neptune with combining radiative hydrodynamical simulations with satellite population synthesis. We found that both Uranus and Neptune could form a gaseous disk at the end of their formation, when their surface temperature dropped below 500 K. These disks are able to form satellites in them within a few hundred thousand years. The masses of such satellite-systems for both planets were often similar to the current one around Uranus. All the formed moons must be icy in composition, given that they formed in a CPD that has a temperature below water freezing-point.

All of this has implications for the exomoon hunt, in that the formation of moons seems to be likely across the entire range from gas giant to ice giant. Bear in mind how often we’ve found Neptune-class planets among the population of exoplanet candidates. If such worlds are producing exomoons, then such moons form a larger population than we had realized. Our studies of the Jovian and Saturnian moons have shown how interesting they are in terms of astrobiological possibilities, a realm that now widens as we expand the discovery space.

Says Szulágyi: “[A] a much larger population of icy moons in the Universe means more potentially habitable worlds out there than it was imagined so far. They will be excellent targets to search for life outside the Solar System.”

The paper is Szulágyi, Cilibrasi and Mayer, “In situ formation of icy moons of Uranus and Neptune,” Astrophysical Journal Letters 868 (2018), L13. Abstract / Preprint. Among the papers on Triton as a disrupter of Neptune’s early system of moons, see in particular Rufu & Canup, “Triton’s Evolution with a Primordial Neptunian Satellite System,” Astronomical Journal Vol. 154, No. 5 (2017). Abstract.