Some relatives of a friend recently made me realize how routine exoplanet discoveries have become to the public. These are anything but astronomy buffs, but they know that planets can be found without ever being seen. My acquaintances may not understand radial velocity or transits to any high degree, but they accept that the methods are there and have proven reliable. “Someday,” said one, “I guess we’ll actually see one of these planets.”

The image below came as a surprise when I showed it to them. Here we do see a planetary system, four actual planets around the star HR 8799 and not just jiggles in Doppler signals or dips in a lightcurve. For me, what’s astonishing here is not only that we can see planets despite their proximity to the host, but that we’ve accomplished this with telescopes on the ground. Adaptive optics — correcting for turbulence in the atmosphere that would distort an astronomical image, using a guide star as a reference — is the tool that is opening a new era in astronomy from the surface of the Earth. Couple it with spectroscopy and a world of possibilities emerges. 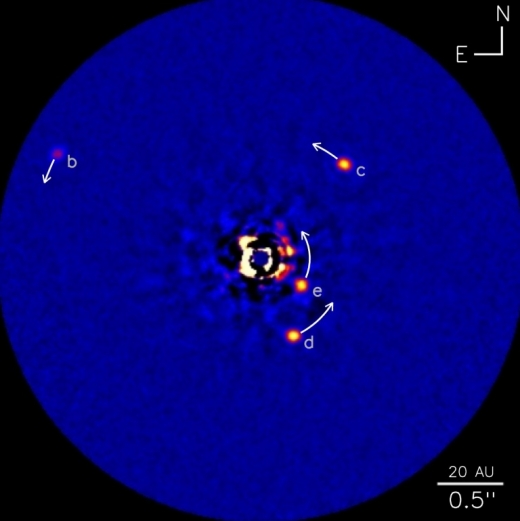 Image: The HR 8799 planetary system is the first stellar system beyond our own that astronomers directly imaged. Captured in 2008 using Keck Observatory’s near-infrared adaptive optics, the picture revealed three planets (labeled ‘b’, ‘c’, and ‘d’) orbiting a dusty young star named HR 8799 (center). In 2010, the team announced they detected a fourth planet in the system (labeled ‘e’). The HR 8799 system is located 129 light-years away from Earth. Credit: NRC-HIA/C. Marois/W. M. Keck Observatory.

We have over a dozen directly imaged exoplanets at this point, but HR 8799 gives us the first multiple planet system to be so viewed. A newly published study reports on the use of a high-resolution spectrometer called NIRSPEC (near-infrared cryogenic echelle spectrograph) that works at infrared wavelengths. Built at the UCLA Infrared Laboratory, it has detected water in the atmosphere of HR 8799c, a gas giant of 7 Jupiter masses in a 200 year orbit. The work also demonstrates a lack of methane in data from an instrument sensitive enough to find it. 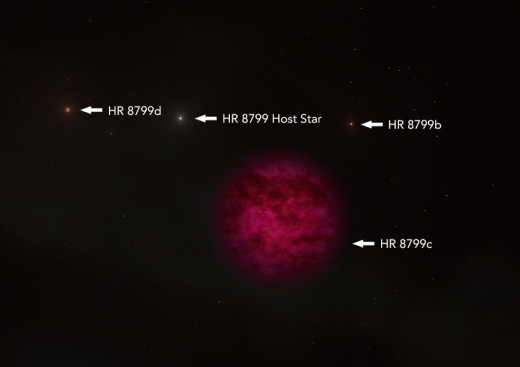 Image: Artist’s impression based on published scientific data on the HR 8799 solar system. The magenta, HR 8799c planet is in the foreground. Compared to Jupiter, this gas giant is about seven times more massive and has a radius that is 20 percent larger. HR 8799c’s planetary companions, d and b are in the background, orbiting their host star. Credit: W. M. Keck Observatory/Adam Makarenko/C. Alvarez.

The Keck II study combines the high spatial resolution of adaptive optics with the high spectral resolution of NIRSPEC. Lead author Ji Wang (Ohio State University) and team explain that this is the first time a directly imaged planet has been investigated with spectrometer and adaptive optics using the L-band, a wavelength around 3.5 micrometers. Although challenging for astronomers, this wavelength is rich in markers for chemicals in the target atmosphere.

The lack of methane in HR 8799c’s atmosphere does not come as a surprise, as it confirms earlier analyses:

“We are now more certain about the lack of methane in this planet,” says Wang. “This may be due to mixing in the planet’s atmosphere. The methane, which we would expect to be there on the surface, could be diluted if the process of convection is bringing up deeper layers of the planet that don’t have methane.”

Future work in the L-band, which can make measurements of a planet’s carbon-to-oxygen ratio, will be useful in determining the formation history of directly imaged planets. Protoplanetary constituents including hydrogen, oxygen, water, carbon monoxide and methane each have their own ‘snowline’ where they freeze out from the early planet-forming disk. A planet’s carbon-to-oxygen ratio, then, can be a window into where it formed and its later dynamics.

As we move adaptive optics and high-resolution spectroscopy forward, a new instrument called the Keck Planet Imager and Characterizer will soon see planets that are fainter than the HR 8799 worlds and orbit closer to their stars. Keck astronomers consider it a bridge to the Thirty Meter Telescope planned for the late 2020s. These technologies should be able to analyze the chemical makeup of Earth-like planets in their stars’ habitable zones, looking for potential biosignatures like water, oxygen, and methane. The astrobiology investigation intensifies.