It’s a long name, but with the successful arrival of the Interior Exploration using Seismic Investigations, Geodesy and Heat Transport (InSight) lander on Mars, we now go to work on the planet’s deep interior. With Centauri Dreams’ deep space perspective, my thoughts quickly turn to other stellar systems. We’ve all seen how hard it is to land on Mars, and have looked up into the night sky to find the ruddy pinprick that marks its naked eye presence. Given our Solar System’s scale, the task of getting humans to Mars looms as a major challenge. 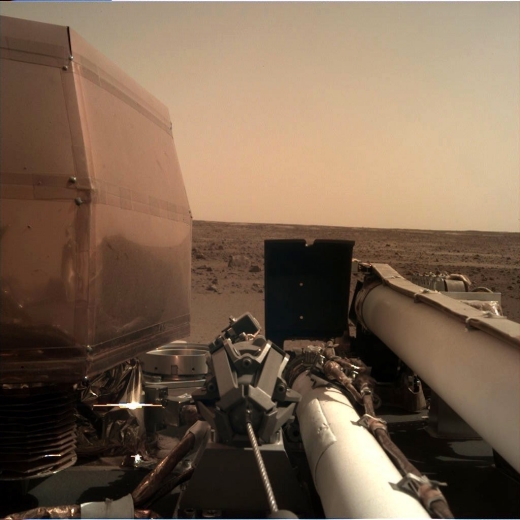 Image: Who can resist the first clear photo from a Mars mission? Not me. Credit: NASA.

But suppose we were on a planet in the TRAPPIST-1 system. Here we have roughly Earth-sized planets packed into tight proximity around the parent red dwarf. TRAPPIST-1b is at 0.011 AU, while TRAPPIST-1c is at 0.015 AU. Even the most distant from the star, TRAPPIST-1h, orbits at 0.062 AU, so that these seven worlds are all closer to the host than Mercury in our system. TRAPPIST-1b and TRAPPIST-1c are no more than 1.6 times the distance between the Earth and the Moon apart.

With significant celestial targets this numerous and this obvious in the sky, would any civilization emerging in such a system not have a greater incentive to become spacefaring at an early stage in its development? Imagine another planet, perhaps with atmosphere and ecosystem of its own, looming larger than the Moon in our skies. And others not so much farther away.

Climate Among the Seven Worlds

Space telescopes have limited resources and they’re expensive to operate. Better, then, that we figure out as much as we can about potential objects of study before we even launch such tools as the James Webb Space Telescope, now expected to be sent aloft in 2021. Thus climate models of the TRAPPIST-1 planets are becoming something of a cottage industry.

Now we have a new paper out of the University of Washington that offers rigorous physical modeling both of the radiation environment and chemistry in the system. The models create spectral signatures for each of the possible gases in TRAPPIST-1 atmospheres.

“We are modeling unfamiliar atmospheres, not just assuming that the things we see in the solar system will look the same way around another star,” said Andrew Lincowski, UW doctoral student and lead author of a paper published Nov. 1 in the Astrophysical Journal. “We conducted this research to show what these different types of atmospheres could look like.” 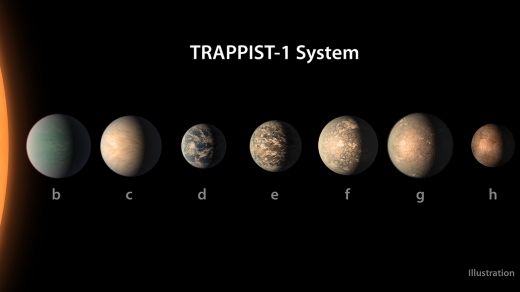 Image: The small, cool M dwarf star TRAPPIST-1 and its seven worlds. New research from the University of Washington speculates on possible climates of these worlds and how they may have evolved. Credit: NASA.

It’s important to bear in mind that we can’t make G-class star assumptions about the planets orbiting this M-dwarf, an ultra-cool object not much larger than Jupiter in size and less than a tenth of the mass of the Sun. So when we talk about three of the TRAPPIST-1 planets being near or in the habitable zone where liquid water could exist at the surface, the statement acknowledges how little we know of conditions on any of these worlds.

We have to include the high degree of stellar activity we find on M-dwarf stars, which could disrupt the early atmosphere as well as destroying ozone that could protect life from UV radiation. In its early stages of development, such a star could put a rocky world with an ocean into a runaway greenhouse condition that might persist for hundreds of millions of years before, as the star gradually dims and enters the main sequence, the planet emerges into the habitable zone.

So we can’t expect terrestrial-class planets around these stars to go through the same development as planets around our G-class Sun. When next-generation searches of small rocky worlds finally occur, they will be our first spectrographic analyses of distant atmospheres looking not only for water vapor but a wide range of biosignature gases. Planetary evolution at M-dwarfs clearly needs to be understood to ensure accuracy.

What happens to planetary atmospheres around dim red stars like this one? Using the Hyak supercomputer system at the University of Washington, Lincowski and team modeled the TRAPPIST-1 planets drawing on the methods of terrestrial climate modeling and infusing into them photochemistry models that they believe provide as good a simulation of planetary conditions here as we have yet seen. The number of possibly ‘habitable’ worlds decreases to one. For it turns out that any or all of the TRAPPIST-1 planets could have stronger resemblance to Venus than to Earth, with whatever water once existed at the surface long departed.

“This may be possible if these planets had more water initially than Earth, Venus or Mars,” Lincowski adds. “If planet TRAPPIST-1 e did not lose all of its water during this phase, today it could be a water world, completely covered by a global ocean. In this case, it could have a climate similar to Earth.”

The team’s work models atmospheric conditions after extreme loss of volatiles early in planetary evolution, discriminating between oxygen- and carbon dioxide-dominated atmospheres and including interior outgassing as a contributor to the final composition. For depending on early conditions, water can be broken by ultraviolet light into its constituents. Hydrogen is thus released, which is light enough to escape the planet’s gravity. Oxygen dominates the thick atmosphere left behind, a remnant that has little to do with life. We have no analog to this kind of atmosphere in our own Solar System.

Differentiating among these worlds, the researchers’ modeling offers the insight that if one of these planets is likely to host life, it is TRAPPIST-1e, the world we’ll want to focus on in future astrobiological studies. TRAPPIST-1b appears hotter than Venus. Planets c and d, further out, still receive enough energy from the host to be Venus-like, with any atmosphere likely dense over an uninhabitable surface. As for planets f, g and h, the spread is wide. They could be frozen worlds or, depending on the amount of water at formation, Venus-like themselves.

The amount of water available to these worlds early in their formation is key here, and plays against the team’s calculations of ocean loss and oxygen accumulation for all seven of the TRAPPIST-1 planets. From the paper:

Our evolutionary modeling suggests that the current environmental states can include the hypothesized desiccated, post-ocean-runaway O2-dominated planets, with at least partial ocean loss persisting out to TRAPPIST-1 h. These O2-dominated atmospheres have unusual temperature structures, with low-altitude stratospheres and no tropospheres, which result in distinctive features in both transmission and emission, including strong collision-induced absorption from O2.

Thus we have a possible signature to look for in future observations. Or we could get atmospheres much more similar to Venus:

Alternatively, if early volatile outgassing (e.g. H2O, SO2, CO2) occurred, as was the case for Earth and Venus, Venus-like atmospheres are possible, and likely stable, throughout and beyond the habitable zone, so the maximum greenhouse limit may not apply for evolved M dwarf planets. If Venus-like, these planets could form sulfuric acid hazes, though we find that TRAPPIST-1 b would be too hot to condense H2SO4 aerosols.

What a prize TRAPPIST-1 has turned out to be. The authors call these worlds “…a natural laboratory to study planetary atmospheric evolution and the associated impact on habitability.”

Consider: We have seven transiting planets that range from well inside the putative habitable zone to well past its outer boundaries. The paper points out how useful this is in examining planet evolution as a function of distance from a star. Moreover, because of their orbital configuration, these planets make frequent transits and offer small star-to-planet ratios, which provide optimum values of signal to noise in the transit signature. We’ll see continued modeling of possible outcomes here as we gear up for next generation observations.

“The processes that shape the evolution of a terrestrial planet are critical to whether or not it can be habitable, as well as our ability to interpret possible signs of life, This paper suggests that we may soon be able to search for potentially detectable signs of these processes on alien worlds.”