I never saw the 2008 film WALL·E, which was all the rage not long after its release. A computer animated science fiction movie, WALL·E won a slew of awards including a Golden Globe for best animated feature, a Nebula for best script, and an Academy Award, as well as making Time’s list of best movies of the decade. Bringing it to mind this morning, though, is the recent success of the InSight mission at landing on Mars, and the support technologies that flew with it.

Thus the image below, which in its own way is iconic. It’s from a craft nicknamed WALL·E after the star of the film, a CubeSat no larger than a briefcase that flew all the way to Mars in a seven month journey that demonstrated what miniaturized technologies can do. WALL·E is formally known as MARCO-B, the partner to MARCO-A (nicknamed EVE, another star of the film).

Both these craft proved successful at their mission, which was to offer Earthside engineers the opportunity to monitor the InSight landing in ways that hadn’t been attempted before. The CubeSats relayed information during the harried minutes of InSight’s descent and touchdown, returning data to the landing team in the time it took radio signals to travel between Earth and Mars. That was an improvement over using Mars orbiters to do the job, as these weren’t positioned to observe the entire landing sequence and get information quickly back to Earth.

“WALL-E and EVE performed just as we expected them to,” said MarCO chief engineer Andy Klesh of NASA’s Jet Propulsion Laboratory in Pasadena, California, which built the CubeSats. “They were an excellent test of how CubeSats can serve as ‘tag-alongs’ on future missions, giving engineers up-to-the-minute feedback during a landing.” 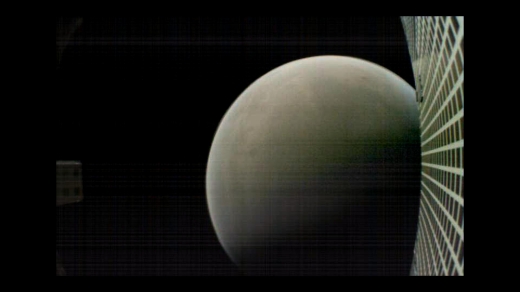 Image: MarCO-B, one of the experimental Mars Cube One (MarCO) CubeSats, took this image of Mars from about 7,600 kilometers (4,700 miles) away during its flyby of the Red Planet on Nov. 26, 2018. MarCO-B was flying by Mars with its twin, MarCO-A, to attempt to serve as communications relays for NASA’s InSight spacecraft as it landed on Mars. This image was taken at about 12:10 p.m. PST (3:10 p.m. EST) while MarCO-B was flying away from the planet after InSight landed. Credit: NASA/JPL-Caltech.

Not everything went smoothly aboard the CubeSats. While MARCO-B was able to image Mars in a sequence of shots, similar imagery from MARCO-A fell victim to camera problems. In keeping with a key advantage of CubeSats, their low cost of assembly, the imagery we do see came from consumer-grade cameras, and the cause of failure on MARCO-A isn’t yet known. But MARCO-B obviously succeeded and we may have further photos in the pipeline.

Meanwhile, an unusually young team of spacecraft designers can take pride in their accomplishment:

“MarCO is mostly made up of early-career engineers and, for many, MarCO is their first experience out of college on a NASA mission,” said Joel Krajewski of JPL, MarCO’s project manager. “We are proud of their accomplishment. It’s given them valuable experience on every facet of building, testing and operating a spacecraft in deep space.”

The point of the photo above isn’t that CubeSats are ready to replace larger, more capable spacecraft. Rather, it’s the fact that in this early assignment in a mission-supporting role, the diminutive craft have proven their worth. As trends in miniaturization continue, we can look forward to putting more functionality into smaller packages, which means increasingly sophisticated payloads with lowering costs for instrumentation and launch.

Coupling CubeSat technologies with solar sails is something we’re learning how to do, and we can now anticipate The Planetary Society’s LightSail 2. We’re shaking out new technologies all around, and as we apply the lessons learned in these missions, we can look forward to a future in which small craft operating in swarm fashion, perhaps driven by solar sails, investigate the outer planets in support of larger spacecraft. Previous paradigms of size and cost will adjust accordingly.