Beyond TESS: Looking Toward CHEOPS

As the exoplanet hunt deepens, we’re seeing how research efforts build upon each other, and how the findings of one investigation play into the planning for another. Kepler candidate planets, for example, have been confirmed using ground-based telescopes in radial velocity investigations, giving an independent check that the putative world is really there. TESS (Transiting Exoplanet Survey Satellite) will find planets that refine the target list for the James Webb Space Telescope, with extremely large telescope technology already in the wings.

What we sometimes forget is that this collaborative effort has already built up a healthy momentum. Having maxed out Kepler (and K2 was an outstanding rehabilitation of a damaged spacecraft), the operations of TESS will focus on bright, nearby stars. The momentum of TESS and its contributions to the upcoming JWST should remind us that we then have the European Space Agency’s CHEOPS (CHaracterising ExOPlanet Satellite) mission queuing up for launch.

ESA has just announced 15 October to 14 November of 2019 as the launch window for CHEOPS, whose ancient name bears parallels to NASA’s Lucy mission. Whereas the inspiration for Lucy was a four-million year old ancestor of modern humans who lived in what is now Ethiopia, CHEOPS bears the name of an ancient Egyptian monarch named Khufu — he was known to the Greeks as Cheops — who lived in the Old Kingdom period in the 26th Century BC, and who may well have commissioned the Great Pyramid of Giza.

The link to ancient humanity, whether intentional in the case of the CHEOPS acronym or not, is a fitting perspective enhancer for a mission that involves expanding our understanding of our place in the universe. The purpose of the mission is to provide precise radius information for exoplanets that have been identified by earlier missions like TESS, using a 30 cm optical telescope working in a Sun-synchronous orbit about 800 kilometers above the Earth. CHEOPS will also target exoplanets found by radial velocity methods and larger worlds found in ground-based transit work. 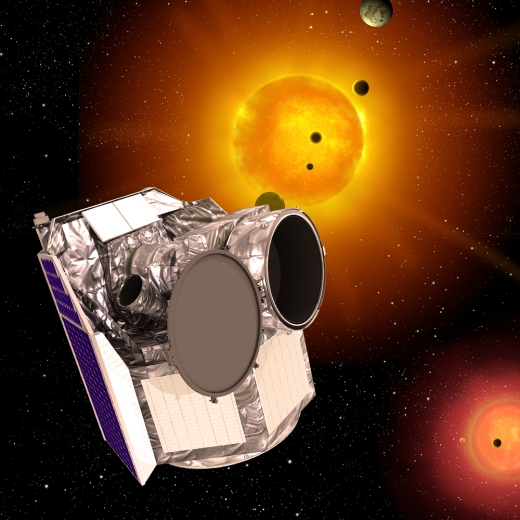 Tightening up our radius estimates of known exoplanets by observing multiple transits of each planet will help to establish the density of these worlds by comparison with mass estimates provided by radial velocity studies. We wind up with constraints on their composition, with the focus on planets ranging from super-Earths to Neptune-class. Out of all this will surely come candidates for follow-up spectroscopic analysis by the instrumentation that will follow.

Having just completed its environmental test campaign at ESA’s technical centre in the Netherlands, CHEOPS is currently at Airbus Defence and Space in Spain for final testing before being declared fit for its 2019 launch. With this in mind, we also look forward to ESA’s PLAnetary Transits and Oscillations of stars (PLATO) mission, whose planned transit work will target one million stars, emphasizing rocky planets in the habitable zone. With launch scheduled for 2026, PLATO is to be followed by ARIEL (Atmospheric Remote-sensing Infrared Exoplanet Large-survey), which will survey the chemistry of roughly 1,000 exoplanet atmospheres.

Those of us whose memories of Apollo are vivid sometimes despair when we see the slow pace of human space exploration in the decades since, but we do see momentum building in the exoplanet realm as developing technologies portend serious breakthroughs ahead. A great age of discovery is upon us even if finding approval for the needed resources isn’t always easy. How the exoplanet revolution unfolds will shape our understanding of our place in the cosmos.