We’d like to know a lot more than we do about how planets create magnetic fields. After all, a major motivation for exoplanet research (though hardly the only one) is to find out whether there is other life in the universe. A magnetic field can protect planetary atmospheres from the effects of the host star’s stellar wind, a stream of charged particles that could disrupt life’s formation. Planets in close orbits of a central star are going to be particularly vulnerable.

But if protecting a planetary surface as well as keeping its atmosphere intact are powerful factors in understanding its evolution, learning more about planetary magnetic fields isn’t going to be easy. Consider a new paper from François Soubiran (École Normale Supérieure, Lyon) and Burkhard Militzer (UC-Berkeley). They’re digging into the question of magnetic fields on super-Earths, in this case planets up to three times the mass of our own world. The scientists believe that magnetic fields could emerge here, but in different ways than on Earth.

The density of some super-Earths, calculated by reference to known radius (from transit studies) and mass (from radial velocity investigations) implies that they are largely made of silicates. While we cannot know with certainty, modeling indicates that their interiors are probably much hotter than Earth’s and reach higher temperatures. The presence of large and persistent magma oceans in their mantles is likely. The question is, could such magma oceans in a state of constant churn generate the dynamo that would produce a magnetic field?

Soubiran and Militzer believe the answer is yes:

“This is a new regime for the generation of planetary magnetic fields,” said Militzer. “Our magnetic field on Earth is generated in the liquid outer iron core. On Jupiter, it arises from the convection of liquid metallic hydrogen. On Uranus and Neptune, it is assumed to be generated in the ice layers. Now we have added molten rocks to this diverse list of field-generating materials.” 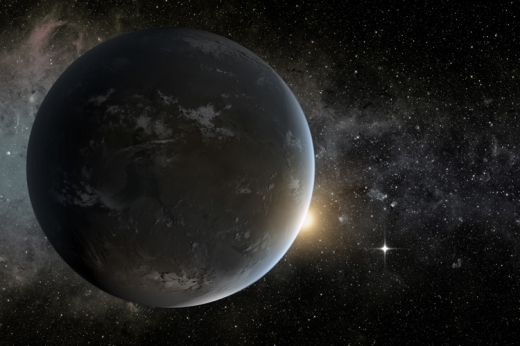 Image: An artist’s concept of a super-Earth in the habitable zone of a star smaller and cooler than the sun. Such large planets could have long-lasting magma oceans that generate magnetic fields capable of protecting incipient life. The graphic was created to model Kepler-62f, one of many exoplanets discovered by NASA’s now inoperable Kepler space telescope. Credit: NASA Ames/JPL-Caltech/Tim Pyle).

On Earth, we locate the processes that generate the magnetic field in the molten-iron outer core, where in combination with the planet’s rotation, churning, electrically conducting liquid iron creates the needed dynamo. But between the core and the Earth’s crust is a mantle of silicates, the silicon-based materials that make up our planet’s interior. The researchers believe layers of material in the mantle of the early Earth may once have produced a convecting magma ocean and a magnetic field, one in place as long as enough material in the mantle remained liquid and convecting.

In the case of super-Earths, the same process could be in play, with the massive scale of these planets keeping their own mantles liquid and convecting for billions of years. The challenge is to test the theory, for working with silicates under conditions like these is, shall we say, problematic. We’re talking about internal planetary temperatures of 10,000 degrees Celsius and pressures up to millions of times greater than atmospheric pressure at the surface.

“At standard temperatures and pressures, silicates are completely insulating; the electrons are either tightly bound to the nuclei or they are in molecular bonds and not able to freely move and create macroscopic electric currents,” Soubiran said. “Even if the high internal pressure helps reduce the barriers for the electrons to move, it was not necessarily obvious silicates would be conducting in super-Earths.” 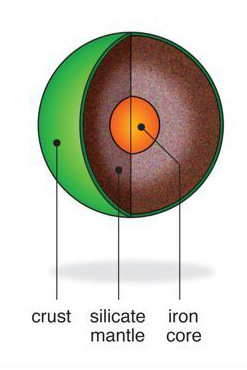 Thus the new paper, which recounts the results from the researchers’ modeling of minerals — quartz (silicon dioxide), magnesia (magnesium oxide) and a silicon-magnesium-oxide (post-perovskite) — at atomic scales, by way of making calculations of their conductivity. We learn that the silicates in question do become conductors as they make the transition to liquids at extremely high pressures and temperatures, enough so as to create a magnetic field.

Image: Layers of a possible super-Earth. The heat of formation of such a large planet could keep its magma oceans active for a billion years, generating its own magnetic field in addition to the magnetic field produced by an iron core. Credit: NASA image.

The rotation of a super-Earth is a factor here. From the paper:

Based on this analysis and with the estimated properties of the silicates mentioned above, to have a dominant dipolar component, one would need to have a rotation period of the planet shorter than 2 days. Such a short period is incompatible with a tidally locked planet in the habitable zone of any star but could be achieved for non-tidally locked planets. Magma oceans on tidally locked Super Earths are thus likely to generate multipolar and not dipolar magnetic fields.

The authors believe that a multipolar magnetic field would be that much more difficult to detect, though the paper does not go into detection methods. And things get more complicated still: While a magnetic field could emerge from a magma ocean alone, interactions difficult to predict are also possible between that ocean and a liquid iron core. What the paper gives us, however, is a calculation of high temperature and pressure conductivity of liquid silicates, showing that with enough convection, they can be conductive enough to support a magnetic field.

Next post: Slowing Star Formation: A Key to Astrobiology?