You would think that helium, being the second most common element in the universe, would have been detected in exoplanet atmospheres long ago. A major constituent of the atmosphere at both Jupiter and Saturn, helium seems a natural because planets form from dust and gas from previous stellar generations, but it turns out that the first helium detection on an exoplanet occurred only this year, in a study led by Jessica Spake (University of Exeter).

The planet in question, WASP-107b, yielded its helium signature in data gathered by the Hubble Space Telescope, a detection that showed clear signs of a comet-like tail forming as the planet’s atmosphere escaped. Note the space-based detection: It’s significant because Earth’s atmosphere is opaque to the ultraviolet light the atoms in such an eroding atmosphere absorb.

Could we make this kind of fine-grained study from the surface of the Earth? It turns out there’s a way: Helium in its long-lived metastable state (as compared to its ground state) can be traced in the near-infrared as well as the ultraviolet. If you’re interested in the details on how metastable helium emerges under conditions like these, Kevin Anderton does a nice job explaining things at the atomic level in this Forbes article.

The point is that researchers are beginning to make these detections using ground-based instruments. Thus today’s paper, recounting new work from the University of Geneva (UNIGE), a research effort that includes Spake. The paper’s account of a helium detection from the ground appears in the journal Science for December 6.

The planet in this study is HAT-P-11b, a transiting ‘warm Neptune’ in Cygnus some 124 light years away, where it orbits 20 times closer to its star than the Earth does to the Sun. Central to the work is the Carmenes spectrograph installed on the 4-meter telescope at Calar Alto, Spain, which allowed the researchers to identify helium escaping from an exoplanet whose overheated upper atmosphere is streaming the gas into space in the form of an extended cloud.

Moreover, the instrument’s high spectral resolution allowed the scientists to detect the position and speed of the helium atoms in the atmosphere. According to Spake:

“This is a really exciting discovery, particularly as helium was only detected in exoplanet atmospheres for the first time earlier this year. The observations show helium being blasted away from the planet by radiation from its host star. Hopefully we can use this new study to learn what types of planets have large envelopes of hydrogen and helium, and how long they can hold the gases in their atmospheres.” 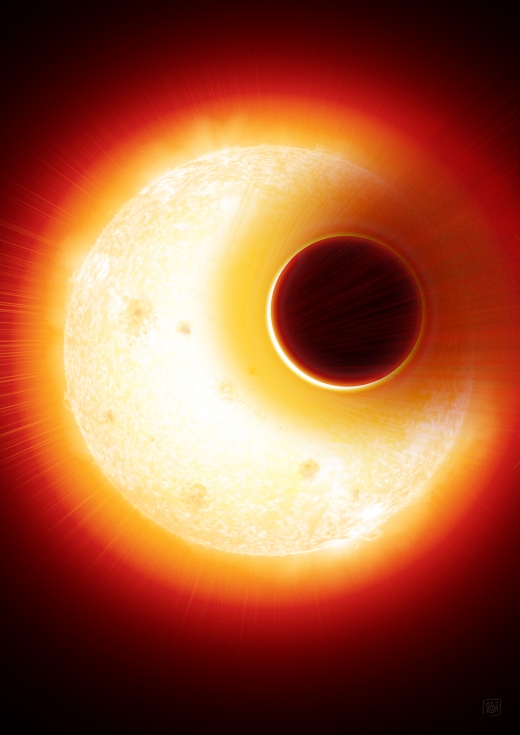 Image: Artist’s impression of the exoplanet HAT-P- 11b with its extended helium atmosphere blown away by the star, an orange dwarf star smaller, but more active, than the Sun. Credit: Denis Bajram.

Vincent Bourrier is a co-author of the study and member of the European project FOUR ACES, an acronym standing for Future of Upper Atmospheric Characterization of Exoplanets with Spectroscopy. Bourrier’s numerical simulations of the movement of the planet’s helium support the spectroscopic observations:

“Helium is blown away from the dayside of the planet to its nightside at over 10,000 km/h,” Bourrier explains. “Because it is such a light gas, it escapes easily from the attraction of the planet and forms an extended cloud all around it.”

First author Romain Allart (UNIGE) adds that proximity to the host star led the team to suspect a high impact on the atmosphere, including the shedding of helium into nearby space. We should expect, in other words, to find numerous other exoplanet atmospheres in this configuration, worlds inflated like a helium balloon. But we’re only now beginning to analyze them. While losing atmosphere is not uncommon in a giant planet close to its star, the predominant element identified in eroding exoplanet atmospheres to this point has been hydrogen.

The Carmenes work makes it clear that ground-based observations can retrieve data on the most extreme atmospheric conditions in exoplanet atmospheres. This is good news for future atmospheric studies, as is the fact that two new high-resolution spectrographs similar to Carmenes are in the works. The Near Infrared Planet Searcher (NIRPS) is undergoing testing at the University of Geneva and will be installed in Chile at the end of 2019. The other, called SPIRou (SpectroPolarimétre Infra-Rouge), is beginning an observational campaign in Hawaii after achieving first light in April. The advent of next-generation extremely large telescopes will further the field yet again by allowing study of escaping atmospheres at smaller planets.

Will we begin to find escaping atmospheres laden with heavier elements? Carbon and oxygen would be slow to escape while hydrogen is the easiest element lost, meaning a giant planet should see a greater amount of helium relative to hydrogen over time. The relative mix we find as we study these escaping atmospheres will help in the analysis of planetary evolution.

The Allart et al. paper is “Spectrally resolved helium absorption from the extended atmosphere of a warm Neptune-mass exoplanet,” Science 6 December 2019 (abstract). The WASP-107b work with the first detection of exoplanet helium is Spake et al., “Helium in the eroding atmosphere of an exoplanet,” Nature 557 (02 May 2018), 68-70 (abstract).