Almost all the exoplanets we know have been detected in evolved stellar systems, places where the protoplanetary disk has dissipated and the planets around the star can be observed. Seeing inside a disk in formation is tricky business, though prominent studies at stars like Beta Pictoris have told us much about the evolution of these disks as planets do begin to emerge. But just how common are disks with ring and gap structures? Do all such disks produce planets?

We’re beginning to learn more as instruments like the Atacama Large Millimeter Array (ALMA) continue to be used to examine infant systems. Many of these show disks that are uniform in appearance, lacking discernible features like rings or gaps. Others are brighter, marked by concentric rings with separations that imply planet formation. It’s natural enough that early efforts have been devoted to brighter disks with their suggestion of planetary activity.

Image: Until recently, protoplanetary disks were believed to be smooth, pancake-like objects. The results from this study show that some disks are more like doughnuts with holes, but even more often appear as a series of rings. The rings are likely carved by planets that are otherwise invisible to us. Credit: Feng Long.

A new effort led by Feng Long (Kavli Institute for Astronomy and Astrophysics at Peking University in Beijing, China) has now appeared that gives us a valuable statistical look at possible planets in protoplanetary disks. Where this study stands out is in its choice of targets. Rather than looking at disks based on the brightness suggestive of ring structures, the researchers chose 32 stars with disks of varying brightness to get a sense of general disk properties.

This is an important point, so let me quote the paper on it:

…the small number of systems observed at high-spatial resolution (∼ 0.1”) to date limits our knowledge about the origins of disk substructures. Moreover, the set of disks imaged at high resolution is biased to brighter disks, many with near/mid-IR signatures of dust evolution, and collected from different star-forming regions and thus environments. These biases frustrate attempts to determine the frequency of different types of substructures, how these substructures depend on properties of the star and disk, and any evolution of substructures with time.

So dim disks as well as bright ones are in the mix here. Feng Long’s survey of young stars targeted disks in the Taurus star-forming region, a vast cloud of dust and gas some 450 light years from Earth. 12 of the stars with protoplanetary disks showed clear indications of rings and gaps within them suggestive of planet formation. Out of the analysis we learn that super-Earths and Neptunes are probably the most common kind of planets forming in these disks, a finding that reinforces exoplanet statistics gathered from fully formed planetary systems.

Of the 12 stars with protoplanetary disks surveyed, only two show disks consistent with the development of a gas giant like Jupiter. All these possible planets emerge out of the team’s calculations applied to the ALMA data, but have not yet been observed. From the paper:

The presence of wider gaps at larger radii hints for planet-disk interaction. The low intensity contrast in most ring and gap pairs suggests the possible link to low mass planets. We follow the diagnostic used in planet-disk interaction simulations (the separation of ring and gap normalized to gap location) to infer planet mass, and find that super-Earths and Neptunes are good candidates if disk turbulence is low (α = 10−4), in line with the most common type of planets discovered so far. 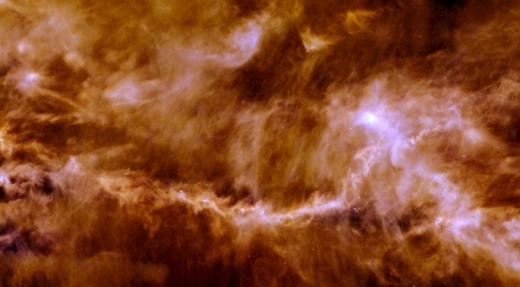 Image: The Taurus Molecular Cloud, pictured here by ESA’s Herschel Space Observatory, is a star-forming region about 450 light-years away. The image frame covers roughly 14 by 16 light-years and shows the glow of cosmic dust in the interstellar material that pervades the cloud, revealing an intricate pattern of filaments dotted with a few compact, bright cores — the seeds of future stars. Credit: ESA/Herschel/PACS, SPIRE/Gould Belt survey Key Programme/Palmeirim et al. 2013).

Key to this study is the need to determine what the rings and gaps in some young systems really indicate. Are they planets in formation, or are they structures formed through other mechanisms? An alternative explanation in the literature involves variations in the chemistry across the disk depending on distance from the star. These presumed variations in pressure are called ‘ice lines.’ They are condensation fronts that occur when disk temperatures drop at larger distances from the priimary, causing various volatiles to freeze out onto dust grains.

However, the new study finds no correlations between stellar properties and gap or ring structures in the surrounding disks, noting no concentration of gap radii around major ice line locations. The conclusion: The rings and gaps do indeed flag nascent planets as the most likely cause of their formation, although other processes may also contribute to the result. The researchers will now adjust the spacing of the ALMA antennae to increase the array’s resolution, while probing at other frequencies sensitive to different sizes of dust grains.

The paper is Long et al., “Gaps and Rings in an ALMA Survey of Disks in the Taurus Star-forming Region,” Astrophysical Journal Vol. 869, No. 1 (6 December 2018). Abstract / Preprint.

Next post: The When and Where of Asteroid 101955 Bennu