Voyager 2 Makes It Through

Voyager 2 has now gone interstellar, making it not only NASA’s single longest-running mission but one of only two spacecraft that have crossed over from the heliosphere to true interstellar space, what scientists call the Local Interstellar Medium (LISM). On that note, it’s interesting to put the Solar System in context. Depending on how you define the term, the Solar System takes in a great deal of interstellar space. Many astronomers put its outer edge at the outer Oort Cloud, perhaps 100,000 AU away, and both Voyagers have yet to reach the inner Oort.

At an estimated 1,000 AU, the inner boundary of the Oort Cloud is where the vast cometary cloud around our star becomes apparent, housing in its entirety trillions of comets and extending about 40 percent of the way to the Alpha Centauri stars. The Voyagers will keep going, of course, and will reach the inner Oort in perhaps 300 years, though without working instrumentation. The steady diminishment of power from the crafts’ radioisotope thermal generators (about 4 watts per year) means we have ten years or less to power instruments.

What a splendid run this has been, and we’re still performing good science. 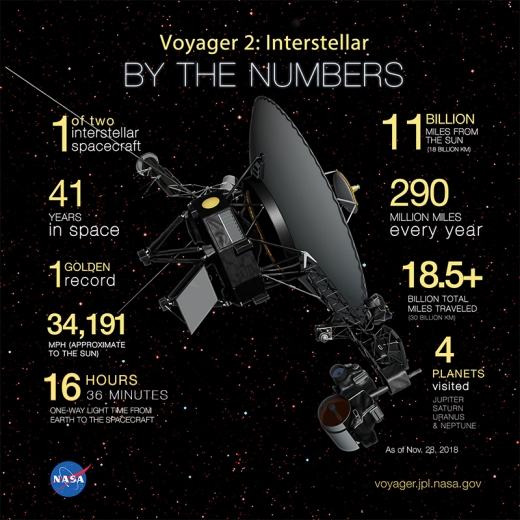 Image: Artist’s concept of Voyager 2 with 9 facts listed around it. Credit: NASA.

Speaking of instruments, it is the robust health of one in particular that has made the Voyager 2 crossover so apparent. Both Voyagers carry a Plasma Science Experiment (PLS), but the one on Voyager 1 stopped working in 1980. But Voyager 2’s PLS told the tale: Measuring the plasma outflow from the Sun — commonly called the solar wind — Voyager 2 could chart the speed, density, temperature, pressure and flux of the plasma. The steep decline in the speed of the solar wind particles on November 5, and the fact that since that time, the PLS has seen no solar wind flow around Voyager 2, leaves little doubt the craft has departed the heliosphere.

“Working on Voyager makes me feel like an explorer, because everything we’re seeing is new,” said John Richardson, principal investigator for the PLS instrument and a principal research scientist at the Massachusetts Institute of Technology in Cambridge. “Even though Voyager 1 crossed the heliopause in 2012, it did so at a different place and a different time, and without the PLS data. So we’re still seeing things that no one has seen before.”

Cameras aboard the Voyagers were turned off long ago to conserve power, but beside the PLS, three other instruments continue to function: The low-energy charged particle instrument, the magnetometer, and the cosmic ray subsystem. All of these show data consistent with Voyager 2’s having crossed the heliopause. We can now compare results from both Voyagers as we investigate the interstellar medium, learning how the heliosphere itself interacts with the plasma flow JPL calls the ‘interstellar wind.’

Bear in mind we also have the Interstellar Boundary Explorer (IBEX) in operation, making observations of the boundary from within the heliosphere. Also in the cards is the Interstellar Mapping and Acceleration Probe (IMAP), which will operate at the L1 Lagrange point about 1.5 million kilometers from Earth to monitor solar wind interactions at the edge of the heliopause by collecting and analyzing particles that make it through the boundary from the LISM. The latter mission is scheduled for launch in 2024, and I’ll have more to say about it soon.

Long-haul missions to deep space demand payloads that can function for decades and perhaps centuries, a fact that has concerned mission designers contemplating component lifetimes in this harsh environment. It’s heartening to think of the two Voyagers, then, for both were built to last five years, enough to make their flybys of Jupiter and Saturn. Uploaded programming helped with the Uranus and Neptune flybys, the latter occurring 12 years after launch. Who would have thought that 41 years into the mission we would still be taking data?

We’re learning numerous lessons about spacecraft longevity by their example, and can contemplate future missions specifically built for interstellar medium exploration. The challenges of getting to, say, the 550 AU gravity lens of the Sun are immense, but if spacecraft built so long ago can leave the heliosphere, next-generation missions are well within our capability. What kind of interstellar precursor will follow the Voyagers and New Horizons out toward the Oort?

Previous post: The When and Where of Asteroid 101955 Bennu