The right kind of atmosphere may keep a planet habitable even if it crowds the inner region of the habitable zone. But atmospheric evolution involves many things, including the kind of geological activity our own planet has experienced, leading to sudden, deep extinctions. Centauri Dreams regular Alex Tolley today takes a look at a new paper that examines the terrestrial extinction of marine species in the Permian event some 252 million years ago. As we examine exoplanet habitability, it will be good to keep the factors driving such extinctions in mind. Tolley is a lecturer in biology at the University of California and author, with Brian McConnell, of A Design for a Reusable Water-Based Spacecraft Known as the Spacecoach (Springer, 2016). A key question in his essay today: Is our definition of the habitable zone simply too broad? 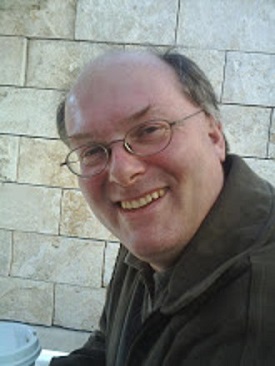 In the search for life on exoplanets, questions about whether the planet is within the HZ given a plausible atmosphere is based on timescales as a fraction of stellar lifetime on the main sequence. With water may come the emergence of life as we know it, and then the long, slow evolution to multicellular life and possible technological civilization. Planets may initially form too close to a pre-main sequence star to be in the HZ, then enter the HZ, only to leave it again as the star increases in luminosity with age. Earth has experienced about a 30% increase in solar luminosity over its lifetime. The CO2 level needed to maintain a constant surface temperature via the greenhouse effect has had to decline to offset the increased insolation. In 1 to 2 billion years, the further increase in solar luminosity will require the CO2 levels to decline below that needed for photosynthesis, or the Earth’s surface will heat up beyond that sustainable for life.

Yet when considering the environment on a world in the HZ, we should be cognizant that climatic instability may create shocks in the short term that have major impacts on life. Earth has experienced 5 major extinctions based on our reading of the fossil record. The most famous being the dinosaur-killing KT event that ended the Cretaceous and allowed mammals to evolve into the newly vacated ecological niches. However, the largest extinction is known as the Permian extinction, or “Great Dying” when over 95% of marine species became extinct about 252 mya. Unlike the KT event, which was a cosmic throw of the dice, the Permian extinction is believed to be due to massive volcanism of the Siberian Traps that released vast quantities of CO2 into the atmosphere that increased its concentration at least several fold. This caused a rapid temperature rise of 10s of degrees Fahrenheit and was accompanied by ocean acidification.

A new paper by Julian Penn et al suggests that this global temperature change caused the extinction of marine species primarily by metabolic stress and hypoxia.

The core idea is that multicellular, aerobic organisms require critical oxygen pressures to live, with their lowest levels of metabolism during resting, and higher levels for activities, such as swimming or feeding. Sessile organisms may have just a 1.5x increase in active metabolic rate over resting, while energetic organisms like fish may be 5x or more. As temperatures rise, so does the metabolic rate. This, in turn, requires adequate oxygen for respiration. But as the temperatures rise, the dissolved oxygen levels fall, placing additional stress on the animals to maintain their respiration rate. Penn integrated climate models to compute the temperature change and dissolved oxygen partial pressures, with the estimated metabolic rates for the activity of various modern animals to represent Permian species, to determine how ocean habitat temperatures impact the metabolisms of marine genera and probable extinction rates.

Figure 1 shows the relation between metabolic rate and temperature, and the temperature increased metabolic index of ocean habitat by latitude and depth. The polar latitudes and shallower depths show the highest changes in the metabolic index, indicating the most stressed habitats. 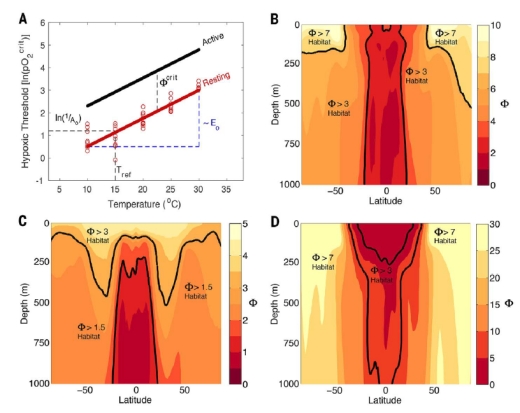 Figure 1. Physiological and ecological traits of the Metabolic Index (F) and its end-Permian distribution. (A) The critical O2 pressure (pO2 crit) needed to sustain resting metabolic rates in laboratory experiments (red circles, Cancer irroratus) vary with temperature with a slope proportional to Eo from a value of 1/Ao at a reference temperature (Tref), as estimated by linear regression when F = 1 (19). Energetic demands for ecological activity increase hypoxic thresholds by a factor Fcrit above the resting state, a value estimated from the Metabolic Index at a species’ observed habitat range limit. (B) Zonal mean distribution of F in the Permian simulation for ecophysiotypes with average 1/Ao and Eo (~4.5 kPa and 0.4 eV, respectively). (C and D) Variations in F for an ecophysiotype with weak (C) and strong (D) temperature sensitivities (Eo = 0 eV and 1.0 eV, respectively), both with 1/Ao ~ 4.5 kPa. Example values of Fcrit (black lines) outline different distributions of available aerobic habitat for a given combination of 1/Ao and Eo. Credit: Justin Penn and Curtis Deutsch, University of Washington.

Figure 2 shows the spatial changes in ocean temperature and oxygen concentrations. Oceanic temperatures rise, particularly towards the poles, and with it a reduction in dissolved oxygen. As expected the greatest rises in temperature are at the shallower depths, particularly with the highly productive continental shelves. Oxygen level declines are most widely seen at all depths at the poles, but far less so in the tropics. 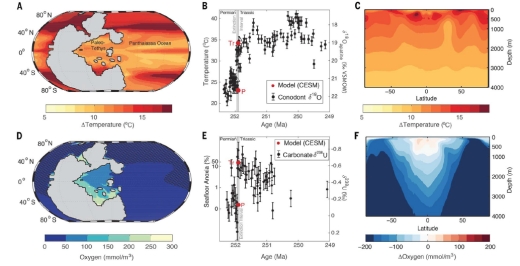 The correspondence between the simulated and observed geographic patterns of selectivity strongly implicates aerobic habitat loss, driven by rapid warming, as a main proximate cause of the end-Permian extinction.

However, while the temperature is the proximate cause, the authors note that other factors are also involved.

“In our simulations, net primary productivity is reduced by ~40% globally, with strongest declines in the low latitudes, where essential nutrient supply to phytoplankton is most curtailed.”

Ocean acidification is also a potential factor, as we may be seeing today. Acidification will be higher at the poles, creating a habitat barrier for species that require more calcification.

Figure 3 is a schematic of the model, fitting the probable extinction rates to the fossil record. Their model predicts a latitudinal impact of warming that is also suggested by the fossil record. Their explanation for this spatial pattern is that tropical organisms are preadapted to warmer temperatures and lower O2 levels. As the oceans warm, these organisms migrate polewards to cooler waters. However, polar species have nowhere to migrate to, and therefore have a higher rate of extinction. 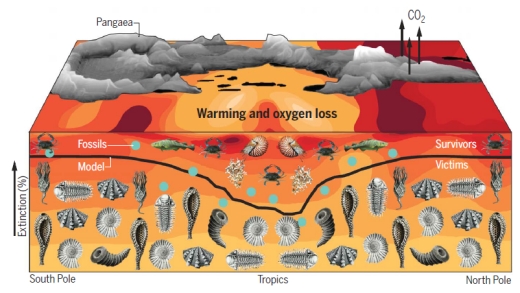 Figure 3. An illustration depicting the percentage of marine animals that went extinct at the end of the Permian era by latitude, from the model (black line) and from the fossil record (blue dots). The color of the water shows the temperature change, with red representing the most severe warming and yellow less warming. At the top is the supercontinent Pangaea, with massive volcanic eruptions emitting carbon dioxide. The images below the line represent some of the 96 percent of marine species that died during the event. Credit: Justin Penn and Curtis Deutsch, University of Washington.

As our current analog of the Permian climate change impacts the oceans, we are already seeing warm water species appearing in the cold North Atlantic, far north of their historic ranges. We can also expect species like the Arctic ice fish that has no red blood cells due to the high O2 concentrations in polar waters to become extinct as polar waters continue to warm.

What about the extinction of terrestrial life? 70% of terrestrial faunal species went extinct. The attractiveness of this theory is that it also applies to terrestrial life, although the oxygen depletion was not a factor. What is clear as well is that the CO2 increase heated the planet, overwhelming any cooling from dust blown up into the atmosphere, as experienced with the 2 year global cooling after Mt. Pinatubo erupted.

Had the Earth been closer to our sun, or temperatures risen further due to greater volcanic activity, the extinctions might conceivably have been 100% for all multicellular genera. Earth life might have been pushed back to primarily archaea and bacteria. The atmosphere might have reverted back to its Archaean state. If photosynthesizers were still present, how long would it take for aerobic multicellular life to evolve again?

The major extinctions have implications for life on exoplanets. Worlds closer to the inner edge of the HZ may be supportive of life if the atmosphere stays stable. However, as we have seen with the example of the Permian extinction, geologic processes can upset that balance, potentially making a world uninhabitable for a period, forcing any life to be restricted to simpler forms. How frequently could such events cause mass, even total extinctions, on other worlds, despite long-term conditions being favorable for life? It is perhaps worth considering whether the inner edge HZ limits should be made more conservative to allow for such events.