Despite the various governmental breakdowns attendant to the event, the New Horizons flyby of Ultima Thule is happening as scheduled, the laws of physics having their own inevitability. Fortunately, NASA TV and numerous social media outlets are operational despite the partial shutdown, and you’ll want to keep an eye on the schedule of televised events as well as the New Horizons website and the Johns Hopkins Applied Physics Laboratory YouTube channel. 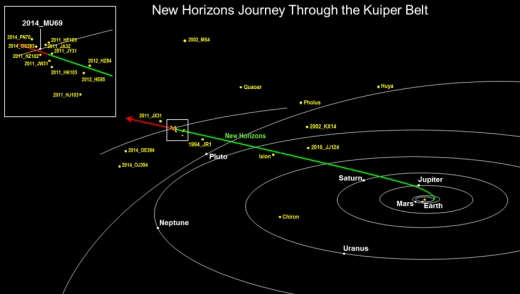 Image: New Horizons’ path through the solar system. The green segment shows where New Horizons has traveled since launch; the red indicates the spacecraft’s future path. The yellow names denote the Kuiper Belt objects New Horizons has observed or will observe from a long distance. (NASA/JHUAPL/SwRI).

We’re close enough now, with flyby scheduled for 0533 UTC on January 1, that the mission’s navigation team has been tightening up its estimates of Ultima Thule’s position relative to the spacecraft, key information when it comes to the timing and orientation of New Horizons’ observations. Raw images from the encounter will be available here. Bear in mind how tiny this object is — in the range of 20 to 30 kilometers across — so that we have yet to learn much about its shape and composition, though we’ve already found that it has no detectable light curve.

“It’s really a puzzle. I call this Ultima’s first puzzle – why does it have such a tiny light curve that we can’t even detect it? I expect the detailed flyby images coming soon to give us many more mysteries, but I did not expect this, and so soon.”

Thus the mission proceeds in this last 24 hours before flyby with grayscale, color, near-infrared and ultraviolet observations, along with longer-exposure imaging to look for objects like rings or moonlets around Ultima. Closest approach is to be 3,500 kilometers at a speed of 14.43 kilometers per second. JHU/APL is reporting that the pixel sizes of the best expected color and grayscale images and infrared spectra will be 330 meters, 140 meters and 1.8 kilometers, respectively, with possible images at 33-meter grayscale resolution depending on the pointing accuracy of LORRI, the Long Range Reconnaissance Imager. 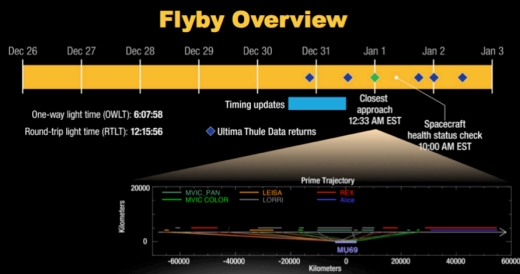 Image: New Horizons’ cameras, imaging spectrometers and radio science experiment are the busiest members of the payload during close approach operations. New Horizons will send high-priority images and data back to Earth in the days surrounding closest approach; placed among the data returns is a status check – a “phone home signal” from the spacecraft, indicating its condition. That signal will need just over 6 hours, traveling at light speed, to reach Earth. (NASA/JHUAPL/SwRI).

Post flyby, New Horizons will turn its ultraviolet instrument back toward the Sun to scan for UV absorption by any gases the object may be releasing, while simultaneously renewing the search for rings. Scant hours after the flyby, New Horizons will report back on the success of the encounter, after which the downlinking of approximately 7 gigabytes of data can begin. The entire downlink process, as at Pluto/Charon, is lengthy, requiring about 20 months to complete.

Let’s keep in mind that, assuming all goes well at Ultima Thule, we still have a working mission in the Kuiper Belt, one with the potential for another KBO flyby, and if nothing else, continuing study of the region through April of 2021, when the currently funded extended mission ends (a second Kuiper Belt extended mission is to be proposed to NASA in 2020). The Ultima Thule data return period will be marked by continuing observation of more distant KBOs even as New Horizons uses its plasma and dust sensors to study charged-particle radiation and dust in the Kuiper Belt while mapping interplanetary hydrogen gas produced by the solar wind.

So let’s get this done, and here’s hoping for a successful flyby and continued exploration ahead! It will be mid-afternoon UTC on January 1 (mid-morning Eastern US time) when we get the first update on the spacecraft’s condition, with science data beginning to arrive at 2015 UTC, and a first 100 pixel-across image (and more science data coming in) on January 2 at 0155 UTC. The best imagery is going to take time to be released, perhaps becoming available by the end of February. We’ll be talking about Ultima Thule a good deal between now and then.

Today is the day we explore worlds farther than ever in history!! EVER. #NASA #Space #Science #UltimaFlyby #ULtimaThule pic.twitter.com/3Stdh2JrMM

Next post: New Horizons Healthy and Full of Data