We’ve just learned that New Horizons is intact and functional, with a ‘phone home’ message at about 1530 UTC that checked off subsystem by subsystem — all nominal — amidst snatches of applause at the Johns Hopkins Applied Physics Laboratory. The solid state recorders (SSR) are full, with pointers indicating that flyby information is there for the sending, even as the spacecraft continues with outbound science. New Horizons will pass behind the Sun in early January, giving us a break in communications for a few days this weekend. Over the next 20 months we will get the entire package from Ultima Thule. Patience will be in order.

Here’s the approach image that was released yesterday.

Image: Just over 24 hours before its closest approach to Kuiper Belt object Ultima Thule, the New Horizons spacecraft has sent back the first images that begin to reveal Ultima’s shape. The original images have a pixel size of 10 kilometers (6 miles), not much smaller than Ultima’s estimated size of 30 kilometers (20 miles), so Ultima is only about 3 pixels across (left panel). However, image-sharpening techniques combining multiple images show that it is elongated, perhaps twice as long as it is wide (right panel). This shape roughly matches the outline of Ultima’s shadow that was seen in observations of the object passing in front of a star made from Argentina in 2017 and Senegal in 2018. Credit: NASA/Johns Hopkins University Applied Physics Laboratory/Southwest Research Institute.

And here’s the best approach image, released a few minutes ago at the press briefing. 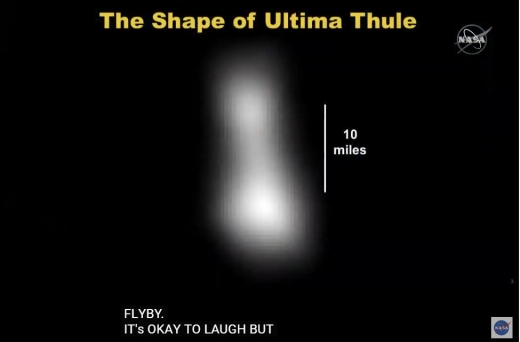 The bi-lobate structure is obvious, but is it a single object or two in tight orbit of each other? We should have the answer to that question in an image that will be released tomorrow. Project scientist Hal Weaver displayed the slide below showing the shape and spin of Ultima. The lack of lightcurve is explained by New Horizons approaching along the line of polar rotation. 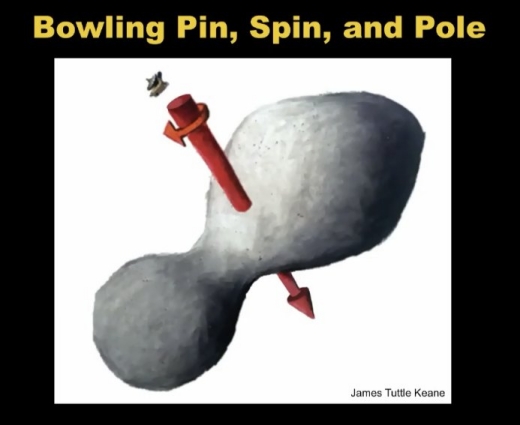 Ultima Thule has pushed New Horizons to its limits. Mission principal investigator Alan Stern put it best at yesterday’s mid-afternoon news conference when he noted “We are straining at the capabilities of this spacecraft. There are no second chances for New Horizons.”

If the primary mission had been the long-studied flyby of Pluto/Charon, whose orbit had the benefit of decades of analysis, Ultima Thule presented controllers with an object not known until 2014, when it was discovered as part of the deliberate hunt for a Kuiper Belt object within range. Thus much about the orbit was unknown, making for what Stern described as a ‘tough intercept.’ Factor in the increased distance from the Sun far beyond Pluto and its effects on lighting conditions, as well as a power generator now producing less wattage because of its age.

Fortunately, LORRI, the Long Range Reconnaissance Imager, had spotted Ultima as far back as August 16 and the spacecraft had been imaging the object ever since, using long exposure times and co-adding procedures in which multiple optical navigation images are layered over each other, until in the last month of the approach the motion of the target could be seen, as mission project manager Helene Winters showed graphically at the same news event. Hazards like moons and rings were ruled out and the optimal trajectory, with approach to within 3500 kilometers, was available. If all went well, the early imagery will give way to fine detail.

1.6 billion kilometers beyond Pluto, New Horizons needed to hit a 40 square mile box with a timing window of 80 seconds, an epic feat of navigation that will surely wind up discussed in the next edition of David Grinspoon and Alan Stern’s book Chasing New Horizons (Picador, 2018), unless the duo decide to spin Kuiper object exploration into a book of its own. But I think not. New Horizons’ story should be seen whole, a continuing story pushed to its limits and, like the Voyagers that preceded it to system’s edge, still returning priceless data.