We can identify a number of circumstellar disks, but most are too far away to provide internal detail, much less the kind of activity that seems to be showing up around the red dwarf AU Microscopii. For at 32 light years out in the southern constellation Microscopium, AU Microscopii is presenting us with an unusual kind of activity that may have repercussions for the question of life around red dwarf stars in general. As presented at the recent meeting of the American Astronomical Society, fast-moving blobs of material are eroding the disk.

The consequence: Icy materials and organics that might have developed in asteroids and comets may instead be pushed out of the disk, long before they could provide the infall of materials thought to have benefited planets like ours. “The Earth, we know, formed ‘dry,’ with a hot, molten surface, and accreted atmospheric water and other volatiles for hundreds of millions of years, being enriched by icy material from comets and asteroids transported from the outer solar system,” said co-investigator Glenn Schneider (Steward Observatory, Tucson, Arizona). 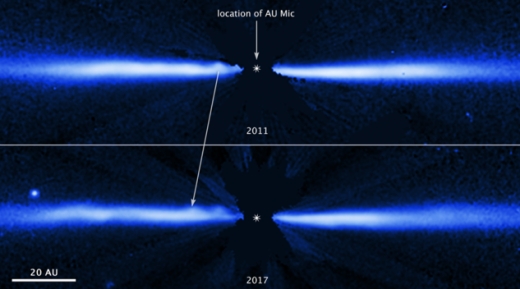 Researchers estimate that the blob of material in the image above is moving at about 24,000 kilometers per hour. It would have moved more than 1.3 billion kilometers between 2011 and 2017, roughly the distance between the Earth and Saturn when the two are at their closest approach to one another. Continually pushing small particles containing water and other volatiles out of the system, such circumstellar materials could cause the AU Microscopii disk to dissipate in 1.5 million years. Each blob — and thus far the team has found six of them — is thought to mass four ten-millionths the mass of Earth.

Image: The box in the image at left highlights one blob of material extending above and below the disk. Hubble’s Space Telescope Imaging Spectrograph (STIS) took the picture in 2018, in visible light. The glare of the star, located at the center of the disk, has been blocked out by the STIS coronagraph so that astronomers can see more structure in the disk. The STIS close-up image at right reveals, for the first time, details in the blobby material, including a loop-like structure and a mushroom-shaped cap. Astronomers expect the train of blobs to clear out the disk within only 1.5 million years. The consequences are that any rocky planets could be left bone-dry and lifeless, because comets and asteroids will no longer be available to glaze the planets with water or organic compounds. Credit: NASA, ESA, J. Wisniewski (University of Oklahoma), C. Grady (Eureka Scientific), and G. Schneider (Steward Observatory).

We wind up with planets lacking the nearby volatiles to enrich them, giving us the prospect of dry, dusty worlds without life. We can add this to the other factors that challenge the emergence of life around red dwarf stars, such as possible tidal lock and the resulting climate issues, not to mention heavy ultraviolet flux from young stars that could strip away the atmosphere of planets in the habitable zone. AU Microscopii is itself 23 million years old, an infant in stellar terms. Bear in mind that red dwarfs are the most common type of stars in the galaxy.

“The fast dissipation of the disk is not something I would have expected,” says Carol Grady (Eureka Scientific, Oakland, California), a co-investigator on the Hubble observations. “Based on the observations of disks around more luminous stars, we had expected disks around fainter red dwarf stars to have a longer time span. In this system, the disk will be gone before the star is 25 million years old.”

The AU Microscopii data were gathered by the European Southern Observatory’s Very Large Telescope in Chile as well as the Hubble Space Telescope Imaging Spectrograph (STIS) by a team led by John Wisniewski (University of Oklahoma). The STIS visible light images, taken in 2010-2011, were followed up by near-infrared work at the the SPHERE (Spectro-Polarimetric High-contrast Exoplanet Research) mounted on the VLT. The work also draws on disk observations of AU Microscopii by the Hubble Advanced Camera for Surveys in 2004.

Next post: A Closer Look at Barnard’s Star b