A Closer Look at Barnard’s Star b

Barnard’s Star b, the planet announced last November around the second nearest star system to the Earth, has been the subject of intensive study by an international team led by Ignasi Ribas at the Institute of Space Studies of Catalonia (IEEC), and Institute of Space Sciences (ICE, CSIC). As announced at the recent meeting of the American Astronomical Society in Seattle, the work helps to refine the age of Barnard’s Star and examines its potential for supporting life on its known planet.

We don’t know whether there are other planets around Barnard’s Star, but the fact of Barnard Star b’s existence is significant, according to Scott Engle (Villanova University), who along with colleague Edward Guinan presented the results in Seattle. Says Engle:

“The most significant aspect of the discovery of Barnard’s Star b is that the two nearest star systems to the Sun are now known to host planets. This supports previous studies based on Kepler Mission data, inferring that planets can be very common throughout the galaxy, even numbering in the tens of billions.”

Indeed, the idea of at least one planet around every star gains currency, and in terms of our own position in the cosmos, it bears noting that many stars in our stellar neighborhood are far older than our own. On that point, the new work benefits from the running analysis performed by a Villanova program called Living with a Red Dwarf, which homes in on the radiative environments that planets around such stars would be subject to as their host evolves. The goal is to make a determination of the likelihood that complex molecules can form, and whether life can evolve. 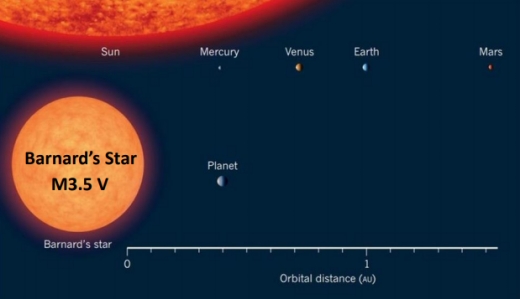 Image: Model of the Barnard’s Star planet system (from Ribas et al. 2018) compared to the inner Solar System. Barnard b orbits at 0..404 AU from its M3.5V host star and has an equilibrium temperature of T=-168C° in its 233-day orbit. Credit: Edward Guinan, Scott Engle / Villanova University.

The gathering of photometric data on Barnard’s Star under this project goes back to 2003, determining a rotation period of 142±8 days, a value that agrees well with other recent studies. The team then used the rotation period to extract a likely age of 8.6 billion years. Estimating stellar age for low-mass stars through rotation is a field known as gyrochronology, one that has accumulated a significant history of published analysis in the past decade. The age determined here also fits other age indicators to establish a result with 1.2 billion years play on either side.

As to that interesting planet, Barnard’s Star b is a super-Earth orbiting far enough from the primary to be cold (-168 C°), with only about 2 percent of light relative to the Earth. What the researchers go on to point out in their presentation is that as a super-Earth with a minimum mass of 3.25 Earth masses, Barnard’s Star b could have a hot iron/nickel core with resulting geothermal activity. The potential, if water is present, is for liquid water under an icy surface.

Geothermal heating could support “life zones” under its surface, akin to subsurface lakes found in Antarctica,” Guinan said. “We note that the surface temperature on Jupiter’s icy moon Europa is similar to Barnard b but, because of tidal heating, Europa probably has liquid oceans under its icy surface.”

We can only speculate about such matters, and the range of outcomes depending on the mass of the planet is wide. Note the range of possibilities in the authors’ presentation, called “X-Ray, UV, Optical Irradiances and Age of Barnard’s Star’s New Super Earth Planet – ‘Can Life Find a Way’ on such a Cold Planet?”:

Although little is definitely known about geomagnetism of superearths like Barnard b, a large liquid iron core, that could strong generate geomagnetic fields, could offer protection from strong winds and coronal mass ejections when the star was young & magnetically active. However, if the mass of the Barnard b is much higher than about 7–10 M⊕, its higher gravity could result in it retaining a thick H2 -He atmosphere and thus be a dwarf gas giant (mini-Neptune). In this case all hope for life is probably lost unless by chance Barnard b hosts an icy moon (with a subsurface ocean) that could be tidally heated like Europa.

Image: (L) Possible model of Barnard b based on geothermal heating. If water is present, geothermal heating could create a subsurface ocean where primitive life could exist. The model would be a scaled-up Europa. (R) In another scenario if the mass of the exoplanet is > 7 M⊕, then the stronger gravity could cause the retention of its primordial H2/He atmosphere. These planets are known as Mini-Neptunes / Dwarf Gas Giants. Credit: Edward Guinan, Scott Engle / Villanova University.

To learn more, we need to image the planet, an observation that would tell us about its atmosphere, surface and potential for life. On this score, the news is promising. Barnard’s Star b has an angular separation from its host that is much larger than Proxima b from Proxima Centauri, and may well be imaged by the next generation of extremely large telescopes (ELTs). It may also prove a target for the James Webb Space Telescope or the WFIRST mission.

Next post: A Disk at an Angle (and a Remarkable View)