A Disk at an Angle (and a Remarkable View)

One of the joys of science fiction is imagining landscapes. What would it be like to stand on Titan, for example, a question that was inescapably influenced in my youth by Chesley Bonestell’s wonderful depictions, as well as novels like Larry Niven’s World of Ptavvs (1966) or Michael Swanwick’s novelette “Slow Life” (Analog, December 2002). And then, of course, there were those multi-star skies, as in Asimov’s “Nightfall” (Astounding Science Fiction September, 1941.

The Science Fiction Writers of America, incidentally, voted “Nightfall” the best science fiction story written prior to 1965, when the Nebula Awards began. I would bet almost all Centauri Dreams readers are familiar with it, but if not, it’s widely anthologized.

And now we have another visual phenomenon to contend with, a landscape and its sky that had never occurred to me. A team led by Grant Kennedy (University of Warwick, UK) has discovered the first confirmed case of a multiple star system whose surrounding disk of gas and dust circles the central stars at right angles. The work grows out of data gathered with the Atacama Large Millimeter/sub-millimeter Array (ALMA). Says Kennedy:

“Discs rich in gas and dust are seen around nearly all young stars, and we know that at least a third of the ones orbiting single stars form planets. Some of these planets end up being misaligned with the spin of the star, so we’ve been wondering whether a similar thing might be possible for circumbinary planets. A quirk of the dynamics means that a so-called polar misalignment should be possible, but until now we had no evidence of misaligned discs in which these planets might form.”

So let’s imagine a planet forming in the dust ring, just as we know planets form in the disks we’ve found around single stars. From the surface of such a world, our new science fictional setting shows us the disk as a band rising out of the horizon, with the twin stars moving in and out of the disk plane, so that we get two shadows much of the time. Our circumbinary planet in its all but perpendicular orbit of the primaries might see a scene like the one below. 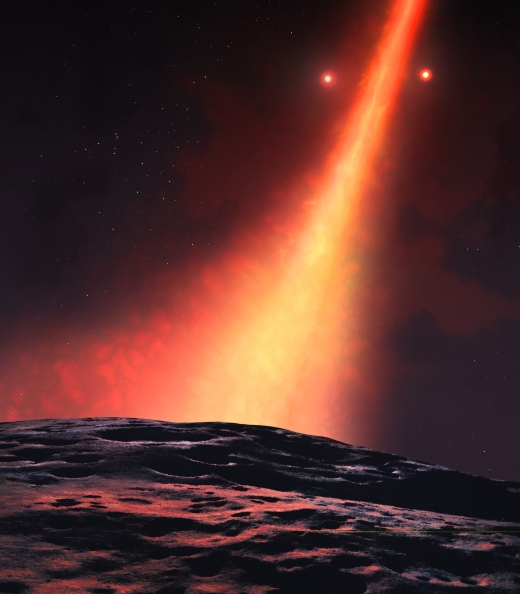 The young system in question is found at HD 98800, also known as TV Crateris, in the constellation Crater, somewhere around 150 light years away from the Sun. This is actually a quadruple star system found in the TW Hydrae association. HD 98800 A is a K-class dwarf probably orbited by a red dwarf, while HD 98800 B is likewise a K-class, red dwarf pairing. A planet in this system — and bear in mind that this is a very young system, so the planet-forming process would be early — would have four nearby stars to color its landscape.

The authors do not believe such systems are rare. From the paper:

If planet formation can proceed equally efficiently in both coplanar and polar configurations, circumbinary planets on polar orbits are predicted to be nearly as common as their coplanar brethren (although these fractions may be modified by later dynamical evolution). The most eccentric binaries are the most likely to have polar disk configurations, so it is not surprising that the known transiting circumbinary planets, which are near to coplanar, are all in systems with e≤0.52, with 8 out of 9 having e<0.22… Polar disks, and perhaps planets, may be a common outcome of circumbinary disk formation, and provide motivation for systematic searches for both. 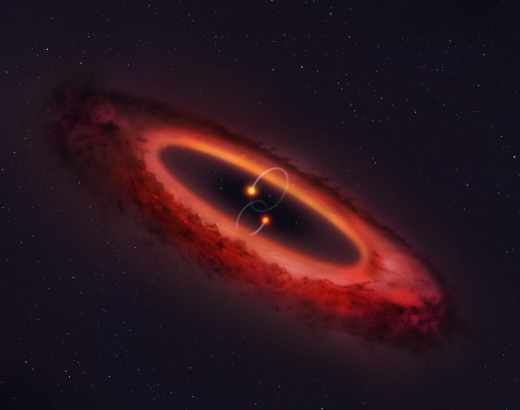 Is there, then, a large population of such unusually aligned circumbinary planets awaiting discovery? If so, we’ll have a variety of further interesting landscapes to consider, even as we ponder the kind of seasonal variations that can occur on circumbinary worlds circling a wide range of stellar classes and their own possible companions. Plenty of material here for writers, or has some far-sighted SF wordsmith already depicted such a planet? If so, please let me know in the comments.

Previous post: A Closer Look at Barnard’s Star b