What’s Next for New Horizons?

The exuberance of images like the one below captures the drama of Solar System exploration. Scenes like this are emblematic of the early reconnaissance of the Solar System. We saw similar enthusiasm with missions near and far — I’m thinking back, for example, not just to Voyager, but the Viking landings on Mars, and I’m sure Russian controllers were equally jubilant when their Venera craft touched down on Venus. Space is indeed the ‘final frontier,’ as James T. Kirk reminded us on Star Trek, and it’s a frontier that goes on without end. 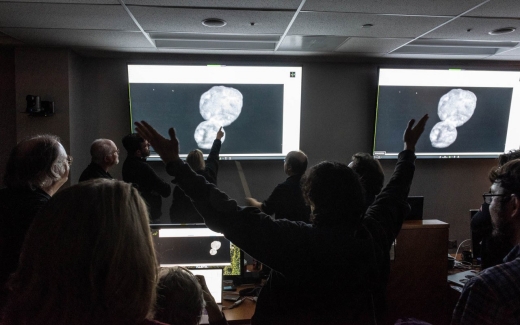 Let’s keep in mind, then, that New Horizons is not just returning Ultima Thule data, but continuing to push into the Kuiper Belt doing good science. In terms of future missions, we need to learn as much as we can about radiation, gas and dust as we assess the environment. New Horizons will get an extended mission, we can hope with some justification, because after all, a fully operational spacecraft operating in this far region is a unique, invaluable resource.

But we don’t have to wait for an extension to continue exploring Kuiper Belt objects, even if no flyby is possible. I’m thinking of one called 2014 PN70, which will be observed in March. As mission principal investigator Alan Sterne notes in this latest report, this KBO was a proposed flyby target before Ultima Thule was chosen, losing out at least partly because it required more fuel to reach than Ultima.

Although the spacecraft won’t be able to see it up close, we should still be able to assess 2014 PN70’s shape, surface properties and rotation rate, as well as look for possible satellites. Discovered in Hubble observations, the object is known to be about 40 kilometers in diameter. New Horizons will be unable to resolve 2014 PN70 or another early flyby candidate, 2014 OS393, but study of both will help put the accumulating Ultima Thule data in perspective. 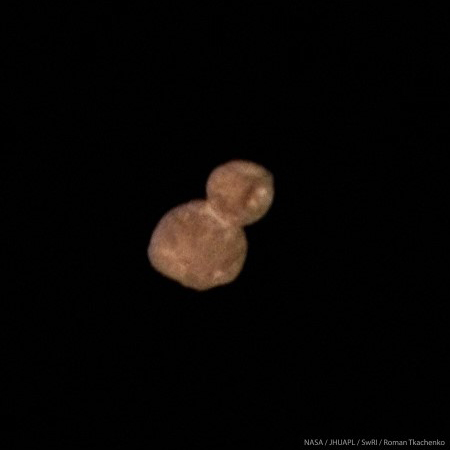 Recovering the entirety of New Horizons data on Ultima Thule will take 20 months, and recall that from January 4 to 9, controllers had to wait because the spacecraft was obscured by the solar corona, making communications problematic. At this point, the team has just 1 percent of all the Ultima Thule data. Hundreds of images and spectra remain to be downloaded, but the process of compiling science results is already well underway, with 40 abstracts submitted to the 50th Lunar and Planetary Science Conference, to be held in Houston this March.

What a primitive place Ultima turns out to be, a fact which comes as no surprise. In the abstract for his talk in Houston, Stern summarizes its nature this way:

New Horizons has revealed MU69 to be a bi-lobate contact binary that appears to have merged at low speed. In addition to being the most primitive solar system object ever to be explored in situ by any spacecraft, MU69 thus also becomes the first primordial contact binary. The appearance and contact binary nature of this object is consistent with it being a relic planetesimal possibly created by pebble accretion. How MU69’s two lobes merged, how gently, and how much angular momentum was lost prior to contact are puzzles to be solved as more data are returned and detailed modeling can be undertaken.

Ultima Thule, then, as well as other Kuiper Belt objects we’ll study with New Horizons and later missions, becomes a key to the formation era of the Solar System, offering potential insights into planetary accretion. The available data have revealed no evidence of rings, a moon or an atmosphere, though we have to hold on that point until the dataset is complete. Differences in surface reflectivity are clear, including the striking brightness of the connecting ‘neck’ between the two lobes (the larger of which is now nicknamed Ultima, the smaller Thule). 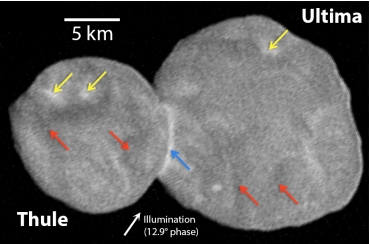 On the matter of dust, this is interesting:

Regarding dust near Ultima Thule, New Horizons saw no evidence down to I/F~5×10-7 in imaging available by 4 Jan 2019. In addition, zero impacts onto the New Horizons dust counter were detected inside MU69’s Hill sphere. And no satellites were detected down to 1.5 km diameter (under the assumption of an Ultima Thule-like reflectivity) outside of 1000 km from Ultima Thule. A search for closer rings or satellites has not yet been performed.

If New Horizons gets that extended mission, it should begin in late 2021. The good news that Stern passes along in his PI’s Perspective is that the spacecraft was able to conserve some of the fuel that had been allocated for the Ultima Thule flyby. Fully operational and with a potent science package, New Horizons is good to go for further Kuiper Belt exploration.