Larry Klaes’ article on the film Silent Running, with its images of Saturn originally intended for 2001: A Space Odyssey, makes today’s story the obvious segue, and thus gives me the chance to catch up with some work I‘ve been wanting to write about. For scientists using Cassini data have been able to zero in on the age of Saturn’s rings, an always lively area of controversy, with evidence that the rings formed between 10 million and 100 million years ago. The new analysis is discussed in the journal Science.

How to make such a call? Everything depends on getting a firmer fix on the mass of the rings, which in turn would tell us something about how bright individual ring particles must be. The brightness of the rings should have been affected by soot-like darkening inevitable over time. Fortunately, we had Cassini at Saturn to perform its so-called Grand Finale orbits, 22 dives between the planet and the rings. The gravitational effect of the rings went from being noise in data about the planet’s interior to a measurable quantity about both rings and host world.

“Only by getting so close to Saturn in Cassini’s final orbits were we able to gather the measurements to make the new discoveries,” said Cassini radio science team member and lead author Luciano Iess, of Sapienza University of Rome. “And with this work, Cassini fulfills a fundamental goal of its mission: not only to determine the mass of the rings, but to use the information to refine models and determine the age of the rings.” 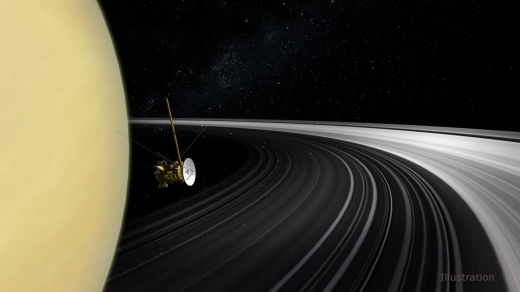 Image: An artist’s concept of the Cassini orbiter crossing Saturn’s ring plane. New measurements of the rings’ mass give scientists the best answer yet to the question of their age. Credit: NASA/JPL-Caltech

Think of Cassini in these orbits as a gravity probe, relaying data on its velocity and acceleration during its passage through Saturn’s gravity field. With acceleration pegged down to a fraction of a millimeter per second, the mass of the planet and its rings could be calculated. Even as we learn that the rings could be as young as 10 million years old, we also find that Saturn’s core has a mass in the range of 15 to 18 times that of Earth. Moreover, vibrations from within Saturn, still unexplained, warp the rings to create a pattern something like the spiral arms of a galaxy.

Iess’ work is actually part of a two-planet project using radio signals from both Cassini and Juno at Jupiter to probe gravitational variations inside the giant planets. The scientist was behind the creation of a radio instrument for Cassini that worked in the Ka band, where signals are largely unhampered by interference from interplanetary plasma. The intent was, among other things, to test general relativity during Cassini’s journey to Saturn. For most of the Cassini mission at Saturn, measuring tiny Doppler shifts in radio signals to study Saturn’s interior was problematic because of the rings, which is why the Grand Finale orbits have been such a game-changer.

Jupiter and Saturn make an interesting pairing for comparison and contrast. I’m looking at a chapter co-authored by Luciano Iess in a volume called Saturn in the 21st Century, written before the recent work. The overview is helpful:

While Jupiter is often thought of as the benchmark giant planet for this class of astrophysical object, now known to be abundant in the universe, Saturn provides an interesting point of comparison and departure for understanding giant planet structure and evolution… For instance, Jupiter models are highly sensitive to the equation of state (EOS, the relation between important quantities such as temperature, pressure and density) of hydrogen, the most abundant element in the universe, and thus can help to probe the phase space region around a few megabars and ten thousand Kelvin, for which accurate lab experimental data are not available yet. Saturn, on the other hand, with 30% of Jupiter’s mass, probes less of hydrogen’s phase space but has its own host of complex issues. With its peculiar magnetic field and high intrinsic luminosity, Saturn provides challenges to our understanding of the first-order properties that define a gas giant planet. For both planets, an understanding of their bulk composition can come from interior modeling, which is an important constraint on formation scenarios.

Radio fluctuations have been the key for mapping the gravity field at both Saturn and Jupiter, helping scientists learn about the deep interior. Comparing data for the two (the Jupiter data were released last year), the researchers found that while Jupiter’s core has an indeterminate boundary, Saturn’s core has a higher concentration of heavy elements, tentatively suggesting a better demarcated boundary. A key question: Does this have implications for the formation history of the two worlds?

Scientists once believed the gas giants formed much like Earth, building up a rocky core before vacuuming gas from the protoplanetary disc. Such a stately process would have likely led to distinct layers, including a discrete core enriched in heavier elements. But Juno’s measurements, interpreted through models, suggested Jupiter’s core has only a fuzzy boundary, its heavy elements tapering off for up to half its radius. This suggests that rather than forming a rocky core and then adding gas, Jupiter might have taken shape from vaporized rock and gas right from the start, says Nadine Nettelmann, a planetary scientist at the University of Rostock in Germany.

Interesting! And so are the differences between Saturn and Jupiter. Saturn’s equatorial atmosphere rotates around the planet faster than its inner layers and core. Only deep within the atmosphere do the layers rotate together, a trait Saturn shares with Jupiter. But the Cassini findings show that Saturn’s layers begin rotating in synchrony much deeper into the planet, as much as 9,000 kilometers down, or three times deeper than the same phenomenon at Jupiter.

“The discovery of deeply rotating layers is a surprising revelation about the internal structure of the planet,” said Cassini Project Scientist Linda Spilker of JPL. “The questions are what causes the more rapidly rotating part of the atmosphere to go so deep, and what does that tell us about Saturn’s interior?”

Even with the new work, we know all too little of Saturn’s deep interior, but so-called ‘ring seismology’ — using effects visible on the rings to draw conclusions about the atmosphere — is for the moment the best tool we have, at least until we get another spacecraft on the scene. As for the rings themselves, they’re losing material to Saturn, an indication of their relative transience. The rings may not have been in existence when the dinosaurs died. Will they be there at all in another 10 million years?

Next post: Refining the Shape of the Milky Way

Previous post: In Wildness is the Preservation of the World: ‘Silent Running’ and Our Choice of Futures