Looking Back from System’s Edge

Sometimes the way we discover new things is by looking back, as witness the blue haze of Pluto. The image below comes, of course, from New Horizons, taken after the flyby and looking back in the direction of the Sun. Here we’re looking at a mosaic combining black and white LORRI images (Long Range Reconnaissance Imager) and enhancing them with lower-resolution color data from the Ralph/Multispectral Visible Imaging Camera (MVIC). The result, taken about 3.5 hours after closest approach, is in approximately true color. 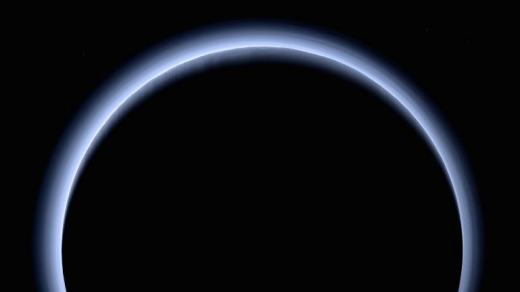 Image: Pluto as seen by New Horizons from 200,000 kilometers after the flyby. The spectacular blue haze, extending to over 200 kilometers in altitude, is the result of sunlight acting on methane and other molecules in Pluto’s atmosphere to produce a photochemical haze. Credit: NASA/Johns Hopkins University Applied Physics Laboratory/Southwest Research Institute.

Ultima Thule likewise yields more of its secrets as we look at data from beyond the closest encounter. New Horizons’ latest target produced departure imagery fleshing out our view of the object’s shape by showing us parts of the KBO that were not illuminated by the Sun during the approach. We learn that the two lobes of Ultima Thule are not spherical at all, but rather that the larger lobe is flattened into a pancake shape, while the New Horizons team sees in the smaller lobe a resemblance to a dented walnut. Here is a video rendering of the data.

Image: Mission scientists created this “departure movie” from 14 different images taken by the New Horizons Long Range Reconnaissance Imager (LORRI) shortly after the spacecraft flew past the Kuiper Belt object nicknamed Ultima Thule (officially named 2014 MU69) on Jan. 1, 2019. The central frame of this sequence was taken on Jan. 1 at 05:42:42 UT (12:42 a.m. EST), when New Horizons was 8,862 kilometers (5,494 miles) beyond Ultima Thule, some 6.6 billion kilometers (4.1 billion miles) from Earth. The object’s illuminated crescent is blurred in the individual frames because a relatively long exposure time was used during this rapid scan to boost the camera’s signal level – but the science team combined and processed the images to remove the blurring and sharpen the thin crescent. This is the farthest movie of any object in our Solar System ever made by any spacecraft. Credit: NASA/Johns Hopkins Applied Physics Laboratory/Southwest Research Institute/National Optical Astronomy Observatory.

“We had an impression of Ultima Thule based on the limited number of images returned in the days around the flyby, but seeing more data has significantly changed our view. It would be closer to reality to say Ultima Thule’s shape is flatter, like a pancake. But more importantly, the new images are creating scientific puzzles about how such an object could even be formed.”

Image: New Horizons took this image of Ultima Thule on Jan. 1, 2019, when the NASA spacecraft was 8,862 kilometers (5,494 miles) beyond it. The image to the left is an “average” of ten images taken by the Long Range Reconnaissance Imager (LORRI); the sharper processed view is to the right. Credit: NASA/Johns Hopkins Applied Physics Laboratory/Southwest Research Institute/National Optical Astronomy Observatory.

Observing stars as they disappeared when Ultima Thule passed in front of them allowed scientists to further refine the shape. The illustration below shows the evolution of our understanding, as we’ve moved from the ‘snowman’ to the ‘pancake’ model.

“While the very nature of a fast flyby in some ways limits how well we can determine the true shape of Ultima Thule, the new results clearly show that Ultima and Thule are much flatter than originally believed, and much flatter than expected,” adds Hal Weaver, New Horizons project scientist from the Johns Hopkins Applied Physics Laboratory. “This will undoubtedly motivate new theories of planetesimal formation in the early solar system.” 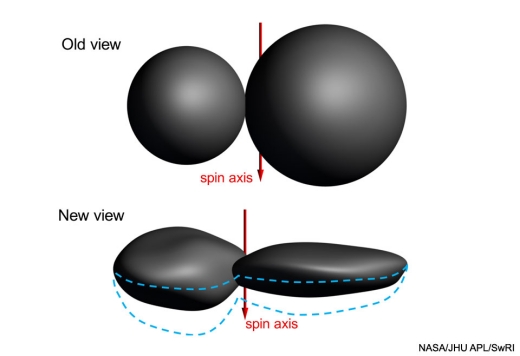 Image: Scientists’ understanding of Ultima Thule has changed as they review additional data. The “old view” in this illustration is based on images taken within a day of New Horizons’ closest approach to the Kuiper Belt object on Jan. 1, 2019, suggesting that both “Ultima” (the larger section, or lobe) and “Thule” (the smaller) were nearly perfect spheres just barely touching each other. But as more data were analyzed, including several highly evocative crescent images taken nearly 10 minutes after closest approach, a “new view” of the object’s shape emerged. Ultima more closely resembles a “pancake,” and Thule a “dented walnut.” The bottom view is the team’s current best shape model for Ultima Thule, but still carries some uncertainty as an entire region was essentially hidden from view, and not illuminated by the Sun, during the New Horizons flyby. The dashed blue lines span the uncertainty in that hemisphere, which shows that Ultima Thule could be either flatter than, or not as flat as, depicted in this figure. Credit: NASA/Johns Hopkins University Applied Physics Laboratory/Southwest Research Institute.