It’s hard to fathom when we look at a globe, but our planet Earth’s substantial covering of ocean is relatively modest. Alternative scenarios involving ‘water worlds’ include rocky planets whose silicate mantle is covered in a deep, global ocean, with no land in sight. Kilometer after kilometer of water covers a layer of ice on the ocean floor in these models, making it unlikely that the processes that sustain life here could develop — how likely is a carbon cycle in such a scenario, and without it, how do we stabilize climate and make an inhabitable world?

These are challenging issues as we build the catalog of exoplanets and try to figure out local conditions. But it’s also intriguing to ask what made Earth turn out as dry as it is. Tim Lichtenberg developed a theory while doing his thesis at the Eidgenössische Technische Hochschule in Zürich (he is now at Oxford), and now presents it in a paper in collaboration with colleagues at Bayreuth and Bern, as well as the University of Michigan. Lichtenberg thinks we should be looking hard at the radioactive element Aluminium-26 (26Al).

Go back far enough in the evolution of the Solar System and kilometer-sized planetesimals made of rock and ice moved in a circumstellar disk around the young Sun, eventually through the process of accretion growing into planetary embryos. In this era a supernova evidently occurred in the astronomical neighborhood, depositing 26Al and other elements into the mix. Using computer simulations of the formation of thousands of planets, the researchers argue that two distinct populations emerge, water worlds and drier worlds like Earth.

“The results of our simulations suggest that there are two qualitatively different types of planetary systems,” says Lichtenberg: “There are those similar to our Solar System, whose planets have little water. In contrast, there are those in which primarily ocean worlds are created because no massive star, and so no Al-26, was around when their host system formed. The presence of Al-26 during planetesimal formation can make an order-of-magnitude difference in planetary water budgets between these two species of planetary systems.” 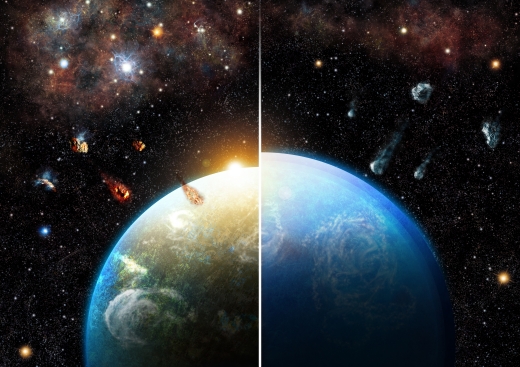 Because planets grow from these early planetesimals, their composition is critical. If a great part of a planet’s water comes from them, then the danger of accreting too much water is always present if many of the constituent materials come from the icy regions beyond the snowline. But radioactive constituents like 26Al inside the planetesimals can create heat that can evaporate much of the initial water ice content before accretion occurs. Dense star-forming regions are more likely to produce planets that manifest these latter outcomes.

Lichtenberg and team examined the decay heat from 26Al in terms of this early planetesimal evolution, which would have led to silicate melting and degassing of primordial water abundances. Their simulations of planet populations delved into internal structures that varied according to disk structures, planetary composition, and initial location of planetary embryos. They produced statistical variations of incorporated water in planets that varied in radius and initial 26Al abundance. In all, the authors achieved what they believe to be a statistically representative set of 540,000 individual simulations over 18 parameter sets. 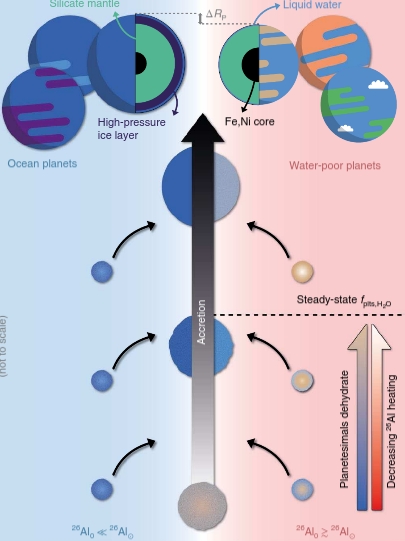 We wind up with planetary systems with 26Al abundances similar to or higher than the Solar System forming terrestrial planets with lower amounts of water, an effect that grows more pronounced with distance from the host star, since embryos forming there are likely to be richer in water. Systems poor in 26Al are thus far more likely to produce water worlds. A remaining question involves the actual growth of rocky planets, as the paper notes:

If rocky planets grow primarily from the accumulation of planetesimals, then the suggested deviation between planetary systems should be clearly distinguishable among the rocky exoplanet census. If, however, the main growth of rocky planets proceeds from the accumulation of small particles, such as pebbles, then the deviation between 26Al-rich and 26Al-poor systems may become less clear, and the composition of the accreting pebbles needs to be taken into account.

The direction of future work to explore the question is clear;

… models of water delivery and planet growth need to synchronize the timing of earliest planetesimal formation, the mutual influence of collisions and 26Al dehydration, the potential growth by pebble accretion, and the partitioning of volatile species between the interior and atmosphere of growing protoplanets in order to further constrain the perspectives for rocky (exo-)planet evolution.

The paper is Lichtenberg et al., “A Water Budget Dichotomy of Rocky Protoplanets from 26Al-Heating,” Nature Astronomy Letters, 11 February 2019 (abstract). Thanks to John Walker for helpful information regarding this story.