It seems increasingly clear that the factors that govern what kind of a planet emerges where in a given stellar system are numerous and not always well understood. Beyond the snowline, planets draw themselves together from the ice and other volatiles available in these cold regions, so that we wind up with low-density gas or ice-giants in the outer parts of a stellar system. Sometimes. Rocky worlds are made of silicates and iron, elements that, unlike ice, can withstand the much warmer temperatures inside the snowline. But consider:

While we now have 2,000 confirmed exoplanets smaller than three Earth radii, the spread in their densities is all over the map. We’re finding that other processes must be in play, and at no insubstantial level. Low-density giant planets can turn up orbiting close to their stars. Planets not so dissimilar from Earth in terms of their radius may be found with strikingly different densities in the same system, and at no great distance from each other.

Which takes us to a new paper from Aldo S. Bonomo and Mario Damasso (Istituto Nazionale Di Astrofisica), working with an international team including astrophysicist Li Zeng (CfA). The collaboration has produced a new paper in Nature Astronomy that uses the planetary system around the star Kepler-107 to probe another possible formative influence: planetary collisions. Kepler-107 may be flagging a process that occurs in many young systems. 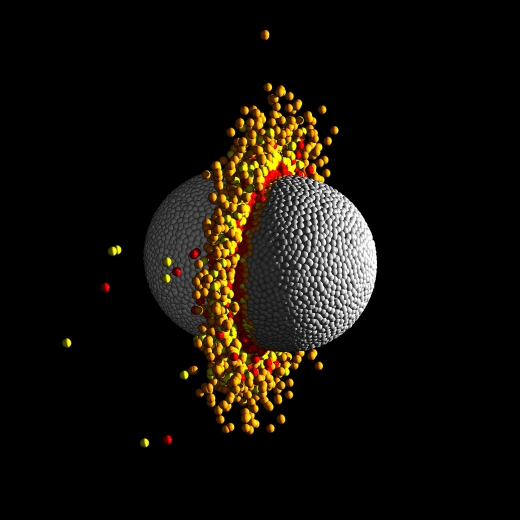 Image: The figure shows one frame from the middle of a hydrodynamical simulation of a high-speed head-on collision between two 10 Earth-mass planets. The temperature range of the material is represented by four colors grey, orange, yellow and red, where grey is the coolest and red is the hottest. Such collisions eject a large amount of the silicate mantle material leaving a high-iron content, high-density remnant planet similar to the observed characteristics of Kepler-107c. Credit: Zoe Leinhardt and Thomas Denman, University of Bristol.

Let’s take a deeper look at this curious system. The two innermost planets at Kepler-107 have radii that are nearly identical — 1.536 and 1.597 Earth-radii, respectively. They both orbit close to the host, a G2 star in Cygnus of about 1.25 solar masses, with orbital periods of 3.18 and 4.90 days. The scientists used the HARPS-N spectrograph at the Telescopio Nazionale Galileo in La Palma to determine the planets’ masses, and because they were working with known radii (thanks to Kepler’s observations of these transiting worlds), they were able to determine their densities. And now things get interesting.

The outer of the two is the denser world and by more than twice the inner world’s value, and given the proximity of their orbits, coming up with stellar radiation effects that could have caused mass loss is difficult to do, for such radiation should have affected both in the same way. The remaining strong possibility is that a collision between planets played a role in this system.

“This is one out of many interesting exoplanet systems that the Kepler space telescope has discovered and characterized,” says Li Zeng. “This discovery has confirmed earlier theoretical work suggesting that giant impact between planets has played a role during planet formation. The TESS mission is expected to find more of such examples.”

And this from the paper, which notes the possibility of extreme X-ray and ultraviolet flux in the young system, but dismisses it as operational here, at least to explain the discrepancy:

This imbalance cannot be explained by the stellar XUV irradiation, which would conversely make the more-irradiated and less-massive planet Kepler-107b denser than Kepler-107c. Instead, the dissimilar densities are consistent with a giant impact event on Kepler-107c that would have stripped off part of its silicate mantle.

Image: The video shows a hydrodynamical simulation of a high-speed head-on collision between two 10 Earth-mass planets. The temperature range of the material is represented by four colors grey, orange, yellow and red, where grey is the coolest and red is the hottest. Watch Video. Credit: Zoe Leinhardt and Thomas Denman, University of Bristol.

We can produce Kepler-107c, then, by a collision that results in a high-density remnant. We have apparent evidence for collisions even in our own Solar System. The composition of Mercury, with a dense metallic core and thin crust, may point to this; only Earth is more dense in our system. So too could the emergence of Earth’s moon through a planetary-sized impactor striking our planet. We can also see in the obliquity of Uranus — the planet’s axis of rotation is skewed by 98 degrees from what we would expect — the possibility that, as advanced in some theories, a large object struck the planet long ago.

The paper gives us some of the details about Kepler 107:

…the difference in density of the two inner planets can be explained by a giant impact on Kepler-107 c that removed part of its mantle, significantly reducing its fraction of silicates with respect to an Earth-like composition. The radius and mass of Kepler-107 c, indeed, lie on the empirically derived collisional mantle stripping curve for differentiated rocky/iron planets… Smoothed particle hydrodynamics simulations show that a head-on high-speed giant impact between two ~10M⊕ exoplanets in the disruption regime would result in a planet-like Kepler-107 c with approximately the same mass and interior composition… Such an impact may destabilize the current resonant configuration of Kepler-107 and thus it likely occurred before the system reached resonance. Multiple less-energetic collisions may also lead to a similar outcome.

Another possibility discussed by the authors: Planet c may have formed closer to the parent star and later crossed Kepler-107b in its orbit. But the authors note that to dampen the orbital eccentricities this would have produced, this scenario is unlikely to have had time to operate.

The paper is Bonomo & Zeng, “A giant impact as the likely origin of different twins in the Kepler-107 exoplanet system,” Nature Astronomy 04 February 2019 (abstract).