What a lively place Neptune used to be, at least back in the days when the planet captured Triton, doubtless a Kuiper Belt Object now in a retrograde orbit around the primary. Recent work led by Mark Showalter (SETI Institute) puts the Hubble Space Telescope to work in studying one result of the sudden acquisition of so massive an object. A first generation of small satellites was likely scattered and rearranged, its debris becoming the Neptunian moons we see today.

Among them is Hippocamp, once known as S/2004 N 1, which appears to be a fragment from Neptune’s second largest moon Proteus. What an interesting set of observations we have here. Discovered in 2013, Hippocamp is the outermost of the planet’s inner moons, and it orbits a scant 12,000 kilometers from Proteus. We can relate the 2013 discovery with what Voyager 2 found at Neptune in 1989: A large impact crater on Proteus.

“The first thing we realised was that you wouldn’t expect to find such a tiny moon right next to Neptune’s biggest inner moon,” saysd Mark Showalter. “In 1989, we thought the crater was the end of the story. With Hubble, now we know that a little piece of Proteus got left behind and we see it today as Hippocamp.” 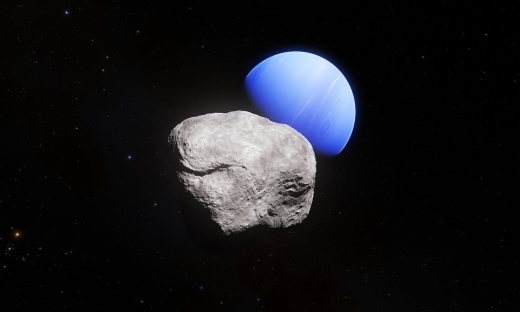 Image: This artist’s impression shows the outermost planet of the Solar System, Neptune, and its small moon Hippocamp. Hippocamp was discovered in images taken with the NASA/ESA Hubble Space Telescope. Whilst the images taken with Hubble allowed astronomers to discover the moon and also to measure its diameter, about 34 kilometres, these images do not allow us to see surface structures. Credit: ESA/Hubble, NASA, L. Calçada.

The likely cause of the Proteus impact is a comet, striking long after the havoc created by Triton’s appearance. Jack Lissauer (NASA Ames) is a co-author of the new work:

“Based on estimates of comet populations, we know that other moons in the outer Solar System have been hit by comets, smashed apart, and re-accreted multiple times. This pair of satellites provides a dramatic illustration that moons are sometimes broken apart by comets.” 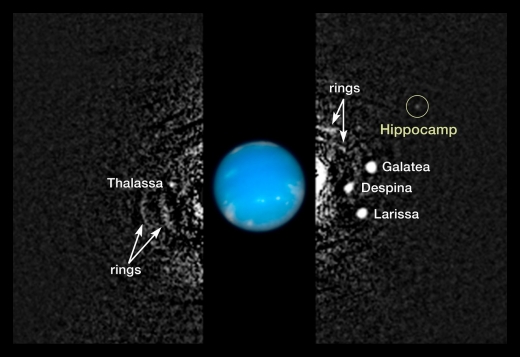 Image: This composite image shows the location of Neptune’s moon Hippocamp, formerly known just as S/2004 N 1, orbiting the giant planet Neptune, about 4.8 billion kilometres from Earth. The moon is only about 34 kilometres in diameter and dim, and was therefore missed by NASA’s Voyager 2 spacecraft cameras when the probe flew by Neptune in 1989. Several other moons that were discovered by Voyager appear in this 2009 image, along with a circumplanetary structure known as ring arcs. Mark Showalter of the SETI Institute discovered Hippocamp in July 2013 when analysing over 150 archival images of Neptune taken by Hubble from 2004 to 2009. The black-and-white image was taken in 2009 with Hubble’s Wide Field Camera 3 in visible light. Hubble took the colour inset of Neptune on August 19, 2009. Credit: NASA, ESA, and M. Showalter (SETI Institute).

Just 1/1000th the mass of Proteus, Hippocamp shouldn’t be where we see it, but that large impact crater Voyager found on Proteus tells the tale. It alone explains why Proteus didn’t assimilate or sweep aside Hippocamp long ago, thanks to an impact sufficient to have all but shattered Proteus while leaving Hippocamp behind. That cometary bombardment makes Hippocamp a third-generation satellite. 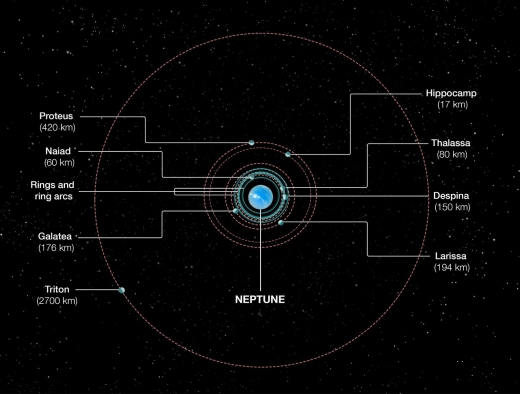 Image: This diagram shows the orbital positions of Neptune’s inner moons, which range in size from 17 to 420 kilometres in diameter. The outer moon Triton was captured from the Kuiper belt many billions of years ago. This tore apart Neptune’s original satellite system. After Triton settled into a circular orbit the debris from shattered moons re-coalesced into the second generation of inner satellites seen today. However, comet bombardment continued, leading to the birth of Hippocamp, which is a broken-off piece of Proteus. Therefore, Hippocamp is considered to be a third-generation satellite. Neither the size of the moons and Neptune, nor the orbits are to scale. Credit: NASA, ESA, and A. Feild (STScI).

Yesterday we looked at an exoplanet scenario for a massive planetary collision. The collision of Proteus with a comet is much smaller in scale, but powerful in its effects. From the paper:

We cannot rule out the possibility that Hippocamp formed in situ and has no connection to Proteus. However, its tiny size and peculiar location lead us to favour the proposed formation scenario, which illustrates the roles that collisions and orbital migration have played in shaping the Neptune system that we see today