One of the most enjoyable interviews I’ve been involved with lately was with Ryan Ferris, who runs the podcast Cosmic Tortoise from Christchurch, New Zealand. Ryan’s questions were sharp and of a philosophic bent, plumbing issues like the purpose and direction of human exploration. From Thor Heyerdahl’s extraordinary experiments at shipbuilding and navigation to the impulses that took Polynesian sailors into unknown waters as they settled Pacific islands, is there an innate human impulse to explore? We kicked all this around, along with SETI, the ‘Oumuamua object, and the need for a re-orienting long-term approach to civilization. 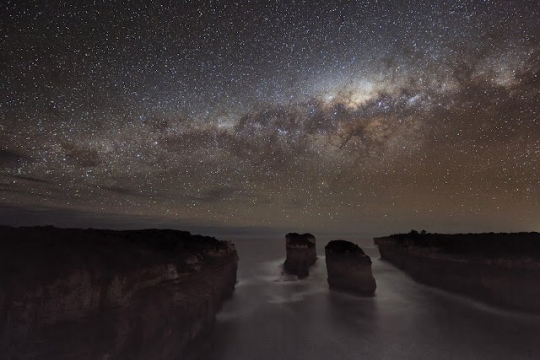 Ultima Thule and the recent exploration of it by New Horizons fit comfortably within the narrative Ryan and I discussed, as an example of satisfying that drive to push into the unknown, and also as an early marker for the growth of infrastructure in the Solar System. The Kuiper Belt pushes us hard for now, but we learn with each mission. In the meantime, forays of growing complexity to the Moon and Mars, as well as nearby asteroids, will teach us many things about human and robotic operations in ways that can extend them more frequently to system’s edge.

I’m still jazzed about Ultima Thule. The New Horizons team is saying the recently released images have the highest resolution of any the spacecraft has taken during its mission. Note the surface detail including several bright areas, roughly circular, as well as dark pits near the terminator. We’ve got so much data yet to come as New Horizons continues to return its information, so there is much to figure out at this point. “Whether these features are craters produced by impactors, sublimation pits, collapse pits, or something entirely different, is being debated in our science team,” said John Spencer, deputy project scientist from SwRI. 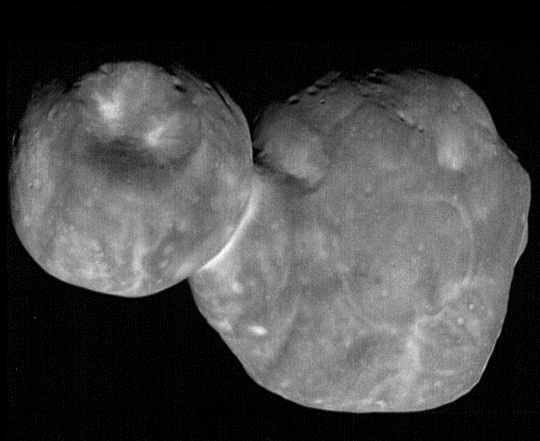 Image: The most detailed images of Ultima Thule — obtained just minutes before the spacecraft’s closest approach at 12:33 a.m. EST on Jan. 1 — have a resolution of about 33 meters (110 feet) per pixel. Their combination of higher spatial resolution and a favorable viewing geometry offer an unprecedented opportunity to investigate the surface of Ultima Thule, believed to be the most primitive object ever encountered by a spacecraft. This processed, composite picture combines nine individual images taken with the Long Range Reconnaissance Imager (LORRI), each with an exposure time of 0.025 seconds, just 6 ½ minutes before the spacecraft’s closest approach to Ultima Thule (officially named 2014 MU69). The image was taken at 5:26 UT (12:26 a.m. EST) on Jan. 1, 2019, when the spacecraft was 6,628 kilometers (4,109 miles) from Ultima Thule and 6.6 billion kilometers (4.1 billion miles) from Earth. The angle between the spacecraft, Ultima Thule and the Sun – known as the “phase angle” – was 33 degrees. Credit: NASA/Johns Hopkins Applied Physics Laboratory/Southwest Research Institute, National Optical Astronomy Observatory

The success at Ultima Thule and the possibility of another KBO encounter in an extended mission will keep New Horizons in our thoughts for a long time to come — even after its KBO adventures have ended, we’ll still be tracking a live, outbound spacecraft just as we follow the Voyagers. The degree of precision exhibited in the Ultima Thule work is made possible by the stellar occultations we’ve discussed here in past months as well as data from the European Space Agency’s Gaia mission, so critical for star locations during the occultation campaigns.

Image: New Horizons scientists created this movie from 14 different images taken by the New Horizons Long Range Reconnaissance Imager (LORRI) shortly before the spacecraft flew past the Kuiper Belt object nicknamed Ultima Thule (officially named 2014 MU69) on Jan. 1, 2019. The central frame of this sequence was taken on Jan. 1 at 5:26:54 UT (12:26 a.m. EST), when New Horizons was 6,640 kilometers (4,117 miles) from Ultima Thule, some 6.6 billion kilometers (4.1 billion miles) from Earth. Ultima Thule nearly completely fills the LORRI image and is perfectly captured in the frames, an astounding technical feat given the uncertain location of Ultima Thule and the New Horizons spacecraft flying past it at over 14.3 kilometers per second. Credit: NASA/Johns Hopkins Applied Physics Laboratory/Southwest Research Institute.

Closing to within 3,500 kilometers of its target, the spacecraft moved three times closer to Ultima than when it flew past Pluto/Charon in July of 2015. No wonder Alan Stern is exultant:

“Getting these images required us to know precisely where both tiny Ultima and New Horizons were — moment by moment – as they passed one another at over 32,000 miles per hour in the dim light of the Kuiper Belt, a billion miles beyond Pluto. This was a much tougher observation than anything we had attempted in our 2015 Pluto flyby.

“These ‘stretch goal’ observations were risky, because there was a real chance we’d only get part or even none of Ultima in the camera’s narrow field of view,” he continued. “But the science, operations and navigation teams nailed it, and the result is a field day for our science team! Some of the details we now see on Ultima Thule’s surface are unlike any object ever explored before.”

The golden age of human discovery continues; indeed, it is just beginning. If you want to explore the raw imagery from the LORRI instrument, have a look at the New Horizons LORRI website. And give some thought to context. One thing we should recall as we ponder future exploration is a vast, island-dotted Pacific, and ancestors who navigated it by wind, currents and stars.