A planet designated Kepler-1658b is, after a good deal of investigation, demonstrated to be a ‘hot Jupiter,’ orbiting a star that is 50 percent more massive and three times larger than the Sun. The sizzling world is close enough to its star that were you to look into its sky from near the planet, the star would be 60 times larger than the Sun as seen from Earth. And while none of this makes Kepler-1658b unique in our catalog, what does stand out is how we learned all this.

For we are talking about the first planet candidate ever uncovered with the Kepler Space Telescope. Recall that for any transiting planet to be considered confirmed, we need a second kind of detection. The reason: Various astrophysical processes can mimic transit activity. Prudence dictates the backup, and in the case of Kepler-1658b, both the initial estimate of the star’s size and the size of the planet were underestimated. The result was that the putative world became thought of as a false positive whose numbers didn’t check.

Three of the stars in the Kepler field were already known to have planets from ground-based transit observations when the mission launched in 2009, and these three targets became the first designated Kepler Objects of Interest (KOI). What would be labeled KOI 4.01, Kepler’s first new planet candidate, was given a stellar radius of 1.1 times that of the Sun, with an initial transit depth implying that the star was orbited by a Neptune-class planet. A new paper on Kepler-1658b goes through the history of its description and subsequent catalog listings.

The detection remained a false positive, though, until a graduate student at the University of Hawai’i named Ashley Chontos reanalyzed the problematic find:

“Our new analysis,” says Chontos,” which uses stellar sound waves observed in the Kepler data to characterize the host star, demonstrated that the star is in fact three times larger than previously thought. This in turn means that the planet is three times larger, revealing that Kepler-1658 b is actually a hot Jupiter-like planet.”

Armed with that information, Chontos contacted Dave Latham (Smithsonian Astrophysical Observatory), whose team went to work culling the needed spectroscopic data to make a radial-velocity call on the planet. Newly confirmed, Kepler-1658b turns out to orbit at a distance only twice the diameter of the host star, making its orbit one of the closest we’ve found to an evolved star (one that has exhausted the hydrogen fuel in its core and, drawing on nuclear reactions outside the core, is passing through the subgiant phase and swelling into a red giant). 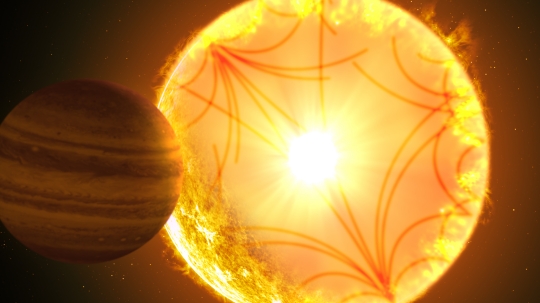 Image: Artist’s concept of a Kepler-1658-like system. Sound waves propagating through the stellar interior were used to characterize the star and the planet. Kepler-1658b, orbiting with a period of just 3.8 days, was the first exoplanet candidate discovered by Kepler nearly 10 years ago. Credit: Gabriel Perez Diaz/Instituto de Astrofísica de Canarias.

This is an interesting find for more than its significance as the first Kepler exoplanet. We know of few planets orbiting stars of this class, a deficit not yet understood. From the paper:

Systems like KOI 4.01 are interesting because giant planets at short orbital periods (P < 100 days) are rare around subgiant stars (e.g. Johnson et al. 2007, 2010; Reffert et al. 2015; Lillo-Box et al. 2016; Veras 2016), although the reason for this is still a topic of debate. On one hand, this may be related to the stellar mass. Subgiant host stars are thought to be more massive than main sequence stars targeted for planet detection. A higher mass could shorten the lifetime of the protoplanetary disk and lead to fewer short-period giant planets orbiting these type of stars (e.g. Burkert & Ida 2007; Kretke et al. 2009). Other authors have suggested that subgiants have fewer short-period planets because these objects may get destroyed by tidal evolution, which is likely stronger for more evolved stars (e.g. Villaver & Livio 2009; Schlaufman & Winn 2013). Distinguishing between those scenarios is further complicated by the fact that it is challenging to derive stellar masses of evolved stars (Lloyd 2011, 2013; Johnson et al. 2013; Ghezzi et al. 2018).

Thus Kepler-186b is a useful outlier that helps us put constraints on what happens as planets approach a death spiral into their star. And another exoplanet mission may provide a useful cross-check:

The Kepler field will be observed by the Transiting Exoplanet Survey Satellite (TESS; Ricker et al. 2015) in mid-2019. Extending the baseline of transit observations to over a decade for Kepler-1658 will allow for a stronger constraint on orbital period decay in more evolved systems. Extrapolating our period decay analysis to the time Kepler-1658 would be observed by TESS would rule out another order of magnitude for the tidal quality factor in subgiant stars.

Next post: A Sparse Population of Small Kuiper Belt Objects?