One problem with learning about the Kuiper Belt is that objects out there are small and details from Earth-based imaging all too sparse. New Horizons yielded up a world of wonders with Pluto, showing us nitrogen glaciers, and mountains fully 4 kilometers tall. But even relative proximity doesn’t help us in some areas. Pluto’s surface has seen enough geologic activity that evidence of its impact history is sparse. Where to turn to learn what has hit it, and when?

The large moon Charon may provide some answers. Unlike Pluto, its surface is relatively stable, giving us insights deep into the past. And we learn from a new paper by Kelsi Singer (SwRI) that there is a surprising lack of craters here nonetheless. The craters we do see on the two worlds were, according to the paper, formed by objects with diameters ranging from ~40 kilometers to ~300 meters, making them smaller than most KBOs we can observe with our telescopes.

Thus a measure of how much in the dark we are about the nature of KBOs. Even Pluto, with resurfacing at work through geological processes, should show more signs of small craters of 13 kilometers or less in diameter. Their lack seems to make small KBOs — ≲1 to 2 kilometers in diameter — very sparse. The work, which appears in Science, implies that there are major differences between the Kuiper Belt and the closest analogue in our system, the main asteroid belt. Says Singer:

“This surprising lack of small KBOs changes our view of the Kuiper Belt and shows that either its formation or evolution, or both, were somewhat different than those of the asteroid belt between Mars and Jupiter. Perhaps the asteroid belt has more small bodies than the Kuiper Belt because its population experiences more collisions that break up larger objects into smaller ones.” 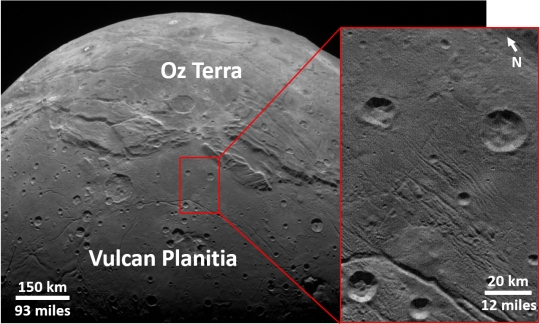 Image: An SwRI-led team studied the craters and geology on Pluto and Charon and found there were fewer small craters than expected. This implies that the Kuiper Belt contains relatively small numbers of objects less than 1.6 kilometers in diameter. Imaged by New Horizon’s LORRI camera, the smooth, geologically stable “Vulcan Planitia” on Charon illustrates these findings. Credit: Courtesy of NASA/JHU/LORRI/SwRI.

We’re still early in the analysis of data from the Ultima Thule flyby, so we don’t want to read too much into this, but it does appear that Ultima supports the same lack of cratering. That’s intriguing because we’re dealing with formation models of the Solar System, which can produce different outcomes and hence populations of objects depending on their inputs. We’re thus homing in on information about the early formation of the Solar System as we analyze the differences between the two belts of debris in their respective positions around the Sun.

Sorting this out will be a lengthy process, dependent upon leveraging data on the three surfaces we’ve been able to study up close through New Horizons, and future data from continued observation (and, let’s assume, additional space missions, including a New Horizons flyby in a future extended mission). Remember that some of the surfaces we’ve seen on Pluto and Charon are likely to be over 4 billion years old, making this analysis of the size and frequency distribution of KBOs provocative.

Interestingly, the paper speculates that if the lack of smaller KBOs is primordial (as opposed to being the result of, say, structural properties of KBOs themselves), this may be consistent with “dynamical models of gravitational instabilities causing rapid growth to larger objects.” Such models produce fewer small bodies and fewer collisions overall. The paper concludes:

There may be more than one combination of processes that can produce the observed KBO SFD [size-frequency distribution]. If there are fewer small objects in the outer Solar System, the probability of collisions is lower, and comets such as 67P/Churyumov–Gerasimenko are less likely to be affected by many catastrophic collisions throughout their lifetimes… By providing constraints on a size range of KBOs not currently accessible by telescopes, the New Horizons crater data can help discriminate between models of accretion, evolution, and/or emplacement of the Kuiper belt.

And dropping back to 1990, we might note another surface, this one of a likely captured KBO, that we viewed from Voyager. I’m pointing to a paper from Robert Strom (Lunar and Planetary Laboratory, University of Arizona) and colleagues on impact cratering on Neptune’s large moon Triton. The scientists found few impact craters on Triton thanks to recent resurfacing from icy melts, with the most heavily cratered surfaces, found on the leading hemisphere in Triton’s orbit, having a crater density about the same as the lunar maria. The scientists argue that some of the craters in Triton’s so-called ‘cantaloupe’ terrain may well be the result of volcanic activity.