A Biosignature Plus for K-Class Stars

Kepler-62 is a reminder of how interesting K-class stars (like Alpha Centauri B) can be. Here we find two worlds that are conceivably in the habitable zone of their star, with Kepler 62f, imagined in the image below, orbiting the host star every 267 days. Kepler-62e, the bright object depicted to the right of the planet, may orbit within the inner edge of the habitable zone. Both planets are larger than Earth, Kepler 62f about 40 percent so, while Kepler-62e is 60 percent larger. 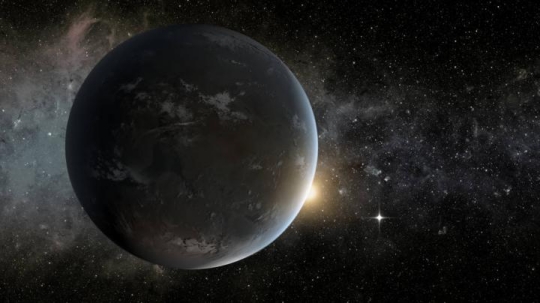 Image: The artist’s concept depicts Kepler-62f, a super-Earth-size planet in the habitable zone of a star smaller and cooler than the sun, located about 1,200 light-years from Earth in the constellation Lyra. Credit: NASA Ames/JPL-Caltech/Tim Pyle.

We actually have five planets here, all known thanks to Kepler to transit their star. The two of habitable zone interest may or may not be solid planets — their masses are not well constrained through either radial velocity or transit timing methods, so we are a long way from knowing whether life might actually form on either. Kepler-62e may well turn out to be a gaseous mini-Neptune, based on its radius. As for the host, Kepler-62 is a K-class main sequence star approximately 70 percent the mass of the Sun, and about 7 billion years old.

K-class stars, particularly those closer than Kepler-62, are seeing a flurry of interest as potential homes for life. In fact, Giada Arney (NASA GSFC) sees them as “in a ‘sweet spot’ between Sun-analog stars and M stars,” for reasons that become clear when you compare them to their smaller and cooler cousins. M-dwarfs are ubiquitous, comprising perhaps 80 percent of all stars in the galaxy, but they’re also given to severe flare activity especially in their early years, enough so that there is a real possibility of damage to the atmosphere and loss of liquid water on the surface.

Add to this problems like tidal locking that could afflict planets in the close-in habitable zone around a cool M-dwarf and by comparison, K-class stars have particular advantages. Arney’s analysis of K star habitability and biosignatures appears in Astrophysical Journal Letters, and it makes the case that a biosignature like the simultaneous presence of oxygen and methane will likely be stronger around a K star than a star like the Sun.

To examine the issue, the scientist developed a computer model simulating planetary atmospheres that could be subjected to conditions around a variety of host stars. Simulations of planetary spectra from these atmospheres could then be produced for analysis. Arney’s work shows that a habitable zone planet circling a K star is one that allows methane to build up in the atmosphere because the host star’s ultraviolet does not generate the highly reactive oxygen that destroys methane as quickly as a star like the Sun. With methane lasting longer within an oxygenated atmosphere, our chance of detecting disequilibrium between the gases increases.

We can add in another factor (one that also favors M-dwarfs): The contrast in brightness between the Sun and our Earth would, to a distant observer, be about 10 billion times, making Earth a very tricky world to observe. Whereas the contrast between a habitable zone planet and a K star is closer to 1 billion. That makes nearby K stars interesting places for future biosignature searches, allowing shorter observing times to achieve a given signal to noise ratio. The author thinks we should keep these advantages in mind as we plan future exoplanet observatories.

The paper lists some interesting targets:

These simulations suggest that nearby mid-to-late K dwarfs such as 61 Cyg A, and 61 Cyg B, Epsilon Indi, Groombridge 1618, and HD 156026 may be particularly excellent targets for biosignature searches on exoplanets. In addition to the “K dwarf advantage” for biosignatures, these stars can offer access to a wide range of wavelengths for HZ planets even with IWA [Inner Working Angle] constraints. 61 Cyg A, 61 Cyg B, Epsilon Indi, and Groombridge 1618 provide higher or comparable S/N to Tau Ceti, the closest G dwarf other than the Sun and Proxima Centauri A. In particular, 61 Cyg A and 61 Cyg B, which are at a similar distance as Tau Ceti (3.6 pc), offer S/N that is 1.6–1.7 times better in the same integration time. HD 156026 is at a similar distance as 82 Eridani (6 pc), and it offers 1.4 times better S/N compared to this G6V star.

But there is this challenge, as alluded to above: Habitable zone planets around K stars will orbit closer to their host than comparable planets around G-class stars like the Sun. That could mean that such planets fall inside the Inner Working Angle (IWA) of future observatories. The IWA defines the smallest separation between planet and star at which the planet can be resolved. Direct imaging telescopes, including the future LUVOIR and HabEx may not, then, be able to see the planet at the needed wavelengths. The paper considers starshade and coronagraph designs that could solve this problem.