Biosignature gases are those that can alert us to the possibility of life on a planet around another star. We’re moving into the era of biosignature observation by studying the atmospheres of such planets through instruments like the James Webb Space Telescope, and the effort to catalog the combinations of atmospheric gases that point to life is intense and ongoing.

One gas has turned out to be controversial. It’s carbon monoxide, which in some quarters has been considered to be the opposite of a biosignature, a clear sign, if detected in sufficient abundance, that a planet is not inhabited. Edward Schwieterman (UC-Riverside) begs to disagree, and a team led by Schwieterman has produced its modeling of biosphere and atmosphere chemistry to focus on living planets that nonetheless support carbon monoxide at levels we should be able to detect. The work appears in the Astrophysical Journal.

Interestingly, the paper harks back to our own planet’s deep past. We don’t expect to see high levels of carbon monoxide on life-giving planets because the gas is so quickly destroyed by chemical reactions on our oxygen-rich world. Go back several billion years, however, and Earth was a place whose oceans carried an abundance of microbial life, with an atmosphere that was at the same time all but devoid of oxygen, all under a surface lit by a much dimmer Sun.

The researchers found through their modeling that a world like this could support carbon monoxide levels of about 100 parts per million, several orders of magnitude higher than the traces we find of the gas in the atmosphere today. To co-author Timothy Lyons (UC-Riverside), that result carries a clear signal:

“That means we could expect high carbon monoxide abundances in the atmospheres of inhabited but oxygen-poor exoplanets orbiting stars like our own sun. This is a perfect example of our team’s mission to use the Earth’s past as a guide in the search for life elsewhere in the universe.”

Useful information indeed, but the findings go beyond worlds around G-class stars to include possible habitable planets around M-dwarf stars like Proxima Centauri, already known to host an Earth-sized planet in its habitable zone. Here the team found that a living world rich in oxygen could support high carbon monoxide levels from hundreds of ppm to several percent. 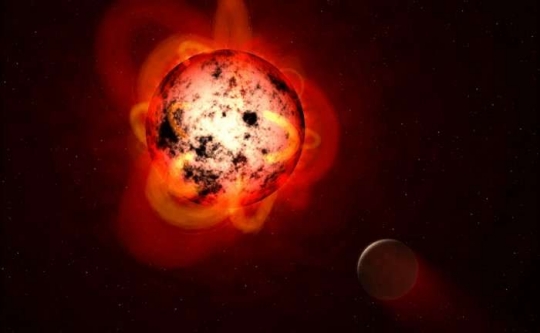 Astrophysical context is all, even if microbial biospheres with high levels of carbon monoxide, as Schwieterman says, “would certainly not be good places for human or animal life as we know it on Earth.” Photochemistry around such stars tells the tale. From the paper:

…the sequence of reactions that ultimately result in tropospheric OH is mediated by NUV radiation that is substantially less plentiful from M-stars such as Proxima Centauri because of lower photosphere blackbody temperatures, with the result that OH production is much less favored and consequently the sinks for CO and CH4 are much less efficient…

which leads to this:

Our results introduce some important caveats to previous suggestions for interpreting CO in planetary atmospheres, particularly for planets orbiting M dwarfs. For example, our demonstration that high CO may be achieved on inhabited planets means that while simultaneously high CO2 and CH4 with little CO is still a compelling biosignature, ambiguous scenarios with high levels of all three gases also exist, and these are mostly relevant for transit transmission observations of habitable zone planets orbiting M dwarf stars. Arguments regarding threshold CH4 levels that are incompatible with abiotic CH4 outgassing rates are in principle still valid (Krissansen-Totton et al. 2018b), but the proposal that CO provides a check on abiotic versus biological origins of CH4 is weakened by our results given likely near-future capabilities.

The ongoing examination of biosignatures is critical, for we could be looking at atmospheric analysis within a few short years. The challenge will be not only to hunt for reliable biosignatures but to avoid overlooking potentially habitable worlds. This paper indicates that two types of living world, one similar to our early Earth, the other around red dwarf stars, are able to support both life and the ready accumulation of carbon monoxide. The reminder that the photochemistry around M-dwarf stars allows substantial buildups of CO while supporting an inhabited world helps to clarify our range of interpretations.

Ten years from now, will we have identified unmistakable signs of life around another star? I seriously doubt it. My guess is that many of our early efforts will turn up results that are ambiguous enough to allow for a range of conclusions. Thus the need to continue cataloging alternative biosignature gases and to fine-tune the spectral capabilities of the instruments we will use to survey these atmospheres. Also in play, according to the paper, are “…searching for biogenic seasonality” and “advanced methods for calculating atmosphere-surface disequilibria.”

The paper is Schwieterman et al., “Rethinking CO Antibiosignatures in the Search for Life Beyond the Solar System,” Astrophysical Journal Vol. 874, No. 1 (15 March 2019). Abstract / full text.

Next post: Working with the Unexpected at Asteroid Bennu