It’s good to see TESS, the Transiting Exoplanet Survey Satellite, producing early results. We’re coming up on the one year anniversary of its launch last April 18, with the spacecraft’s four cameras doing month-long stares at 26 vertical strips of sky, beginning with the southern hemisphere. Two years of such scanning will produce coverage of 85 percent of the sky.

The focus on bright, nearby stars is a shift from the Kepler strategy. While both missions have dealt with planetary transits across the face of their star as seen from the spacecraft, TESS is going to be producing plenty of data for follow-ups, planets close enough that we can consider studying their atmospheres with future missions beginning with the James Webb Space Telescope. Kepler’s long stare was of distant stars in a specific region, the idea being to gain a statistical understanding of the prevalence of planets. TESS gets us closer to home.

Now we have TOI-197 (TOI stands for ‘TESS Object of Interest’), a planet close to the size of Saturn in a tight orbit of its star (about 14 days). Asteroseismology comes into play here, with astronomers from the TESS Asteroseismic Science Consortium (TASC) using stellar oscillations to make a call on the star’s age, about 5 billion years. The star turns out to be slightly larger than the Sun, a late subgiant / early red giant, while the candidate planet shows a radius 9 times that of Earth. It masses 60 Earths, and its density is 1/13th that of our own planet. 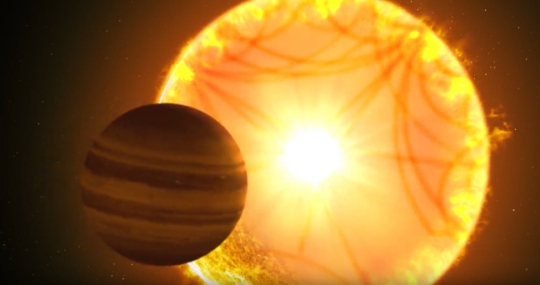 Image: A “hot Saturn” passes in front of its host star in this illustration. Astronomers who study stars used “starquakes” to characterize the star, which provided critical information about the planet. Credit: Gabriel Perez Diaz, Instituto de Astrofísica de Canarias.

Asteroseismologists examine seismic waves in stars (think of them as ‘starquakes’) that show up as changes in brightness, and offer useful clues about about radius, mass and age. TOI-197 turns out to be the first TESS planet for which the oscillations of the host star can be measured. It’s interesting to see, then, that in addition to the paper on TOI-197, we also have a new paper that will prove useful for TESS characterizations going forward. It’s a target list, prepared by TASC, that identifies some 25,000 stars that are both Sun-like and oscillating.

So the asteroseismology work with TESS data gets underway. Steve Kawaler (Iowa State University) notes the scope of the work:

“The thing that’s exciting is that TESS is the only game in town for awhile and the data are so good that we’re planning to try to do science we hadn’t thought about. Maybe we can also look at the very faint stars – the white dwarfs – that are my first love and represent the future of our sun and solar system.”

An interesting thought given shape by the TOI-197 findings that reveal TESS’ potential for asteroseismology. From the discovery paper:

TOI-197 provides a first glimpse at the strong potential of TESS to characterize exoplanets using asteroseismology. TOI-197.01 has one the most precisely characterized densities of known Saturn-sized planets to date, with an uncertainty of ∼ 15%. Thanks to asteroseismology the planet density uncertainty is dominated by measurements of the transit depth and the radial velocity amplitude, and thus can be expected to further decrease with continued transit observations and radial velocity follow-up, which is readily performed given the brightness (V=8) of the star. Ensemble studies of such precisely characterized planets orbiting oscillating subgiants can be expected to yield significant new insights on the effects of stellar evolution on exoplanets, complementing current intensive efforts to characterize planets orbiting dwarfs.

We also have in TOI-197 an addition to the list of close-in transiting worlds around evolved stars; i.e., stars that have begun their transition to red giant status. Worlds like this undergo what the paper calls ‘radius reinflation’ as the host star evolves up the red giant branch. According to the paper, TESS is expected to “detect oscillations in thousands of main-sequence, subgiant and early red-giant stars… and simulations predict that at least 100 of these will host transiting or non-transiting exoplanets.”