A method for enhanced exoplanet investigation takes center stage today as we look at the GRAVITY instrument, a near-infrared tool aided by adaptive optics that brings new precision to exoplanet imaging. In operation at the European Southern Observatory’s Very Large Telescope Interferometer (VLTI) at Paranal Observatory in Chile, GRAVITY works with the combined light of multiple telescopes to produce what would otherwise take a single telescope with a mirror diameter of 100 meters to equal. The early demonstrator target is exoplanet HR 8799e.

The method at work is interferometry, and here we are applying it to a ‘super Jupiter,’ more massive and much younger (at 30 million years) than any planet in our Solar System. The GRAVITY observations of this target mark the first time that optical interferometry has been used to study an exoplanet at this level of precision, producing a highly detailed spectrum. The planet is part of a 5-planet system some 130 light years away, all 5 of the planets being gas giants between 5 and 10 times the mass of Jupiter. 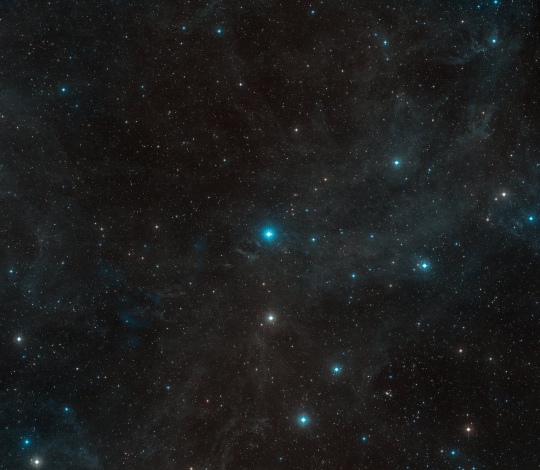 The high resolution images that resulted from this work show what we can expect from optical interferometry going forward. We now know the distance between HR8799e and its star with 10 times the accuracy of previous estimates, which in turn helps to refine the planet’s orbit, one that appears to be slightly inclined compared to the orbital plane of its four companions.

That high-grade spectrum has spoken volumes about the composition of the planet’s atmosphere, says team leader Sylvestre Lacour (Observatoire de Paris and the Max Planck Institute for Extraterrestrial Physics):

“Our analysis showed that HR8799e has an atmosphere containing far more carbon monoxide than methane — something not expected from equilibrium chemistry. We can best explain this surprising result with high vertical winds within the atmosphere preventing the carbon monoxide from reacting with hydrogen to form methane.”

Also present here are clouds of iron and silicate dust, all suggestive of violent storms, as convection causes the dust to rise and then descend into the interior. We’re seeing a giant planet in its turbulent infancy. And what an impressive demonstration of interferometry’s ability to separate star and, in this case, a very close planet, with a result that the European Southern Observatory considers much cleaner than what could be achieved with a coronagraph that would mask out the light of the star. 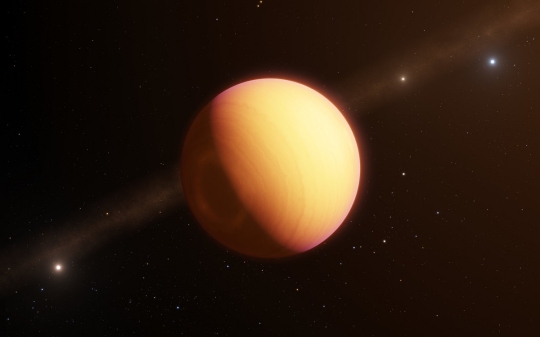 We’ll be using analyses of planetary atmospheres to look for biosignatures one day on cooler and more clement worlds. In the interim, astronomers plan to continue the investigation of the HR8799e system, allowing so complete an analysis of the planet’s orbit that it will be used to reveal the mutual gravitational interactions of the giant planets as well as the influence of the central star. That, in turn, takes us to accurate estimates of the planetary masses.

And these excerpts from the paper are notable. In the first, ‘Kmag’ refers to ‘K magnitude,’ the magnitude of the star about which the extrasolar planet orbits as viewed through a specific filter at near-infrared wavelengths, in this case between 2.0 and 2.4 μm. GRAVITY operates within the K band:

The interferometric technique brings unique possibilities to characterize exoplanets. With the technique described here, any planet with K ≾ 19, ∆Kmag ≾ 11, and separation ≿ 100 mas is, in theory, observable with GRAVITY. The numbers are still to be refined, but it would mean that GRAVITY could observe most of the known imaged planets, and maybe in the near future planets detected by radial velocity [italics mine].

…the idea that an interferometer can resolve the surface of exoplanets, giving radius and resolving clouds patchiness, is now becoming more plausible. However, it would require an interferometer with baselines on the order of 10 km. This could be a goal for ESO after ELT construction.