With 250 times more X-ray radiation than Earth receives and high levels of ultraviolet, would Proxima b, that tantalizing, Earth-sized world around the nearest star, have any chance for habitability? The answer, according to Jack O’Malley-James and Lisa Kaltenegger (Cornell University) is yes, and in fact, the duo argue that life under these conditions could deploy a number of possible strategies for dealing with the radiation influx. Their conclusions appear in a new paper in Monthly Notices of the Royal Astronomical Society.

Thin atmospheres and a lack of ozone protection fail to block UV radiation well, no surprise there, and such atmospheres do not measure up favorably when compared to atmospheres like that of the Earth today. But go back four billion years and we find that the modeled planets receive radiation in the UV significantly lower than what the Earth experienced in that era of its development. Earth was at that time uninhabitable by human standards — had any humans been available — but life had indeed emerged and continued to thrive. Thus the authors write that UV radiation “…should not be a limiting factor for the habitability of planets orbiting M stars.” 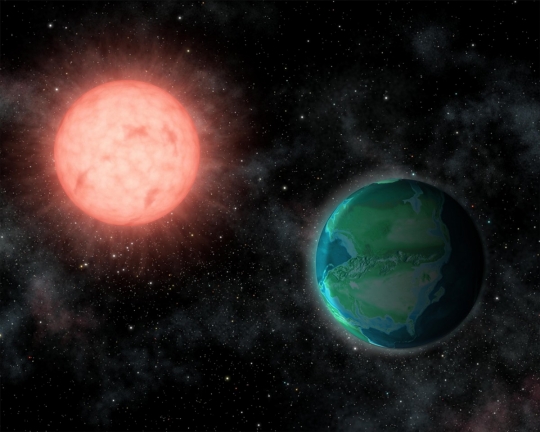 The extremophile Deinococcus radiodurans is key to this study, for it is one of the most radiation-resistant organisms known. By varying the UV wavelengths, the scientists assessed the mortality rates of the organism, in which it becomes clear that some wavelengths of UV are more damaging to biological molecules than others. From the paper:

…we use this as a benchmark against which to compare the habitability of the different radiation models. This action spectrum compares the effectiveness of different wavelengths of UV radiation at inducing a 90 per cent mortality rate. It highlights which wavelengths have the most damaging irradiation for biological molecules: for example, the action spectrum in Fig. 4 shows that a dosage of UV radiation at 360 nm would need to be three orders of magnitude higher than a dosage of radiation at 260 nm to produce similar mortality rates in a population of this organism. 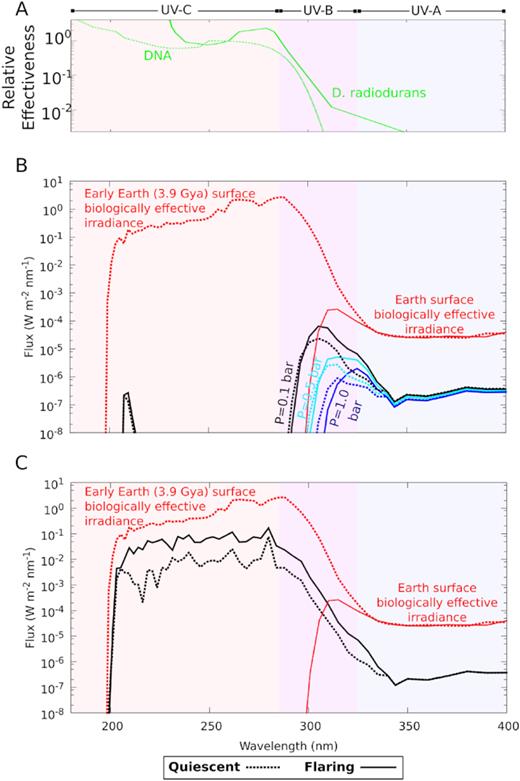 We can’t rule out organisms below ground or living in water or rock, not to mention such survival characteristics as biofluorescence or protective pigments. We know of microorganisms that can tolerate full solar UV in space exposure experiments, using protective cells or pigments as effective UV screens. Biofluorescence offers protection against radiation because UV can be upshifted to longer wavelengths that produce less harm. The authors think protective biofluorescence would be at its most useful during the intense UV flux of flares, although a constant level of high UV might produce continuous fluorescence.

Here we have a potential biosignature, cited by the authors in a previous paper:

We may get our first look at such atmospheres by observing ozone, which is potentially detectable by the James Webb Space Telescope. On the other hand, a high-enough level of UV could also produce a biosphere below ground that would present, if any, only the weakest of biosignatures. Even so, the authors conclude that nearby planets around M-dwarfs like those studied here are serious candidates for biosignature examination by future observatories.

While a multitude of factors ultimately determine an individual planet’s habitability our results demonstrate that high UV radiation levels may not be a limiting factor. The compositions of the atmospheres of our nearest habitable exoplanets are currently unknown; however, if the atmospheres of these worlds resemble the composition of Earth’s atmosphere through geological time, UV surface radiation would not be a limiting factor to the ability of these planets to host life. Even for planets with eroded or anoxic atmospheres orbiting active, flaring M stars the surface UV radiation in our models remains below that of the early Earth for all cases modelled. Therefore, rather than ruling these worlds out in our search for life, they provide an intriguing environment for the search for life and even for searching for alternative biosignatures that could exist under high-UV surface conditions.

Previous post: A Major Hubble Survey of the Kuiper Belt