A possible second planet around Proxima Centauri raises all kind of questions. I wasn’t able to make it to Breakthrough Discuss this year, but I’ve gone over the presentation made by Mario Damasso of Turin Observatory and Fabio Del Sordo of the University of Crete, recounting their excellent radial velocity analysis of the star. Proxima c is a fascinating world, if it’s there, because it would be a super-Earth in a distant (and cold) 1.5 AU orbit of a dim red star. Exactly how it formed and whether it migrated to its current position could occupy us for a long time.

But is it there? The first difficulty has to do with stellar activity, which Damasso and Del Sordo were careful to screen out; it’s one of the major problem areas for radial velocity work in this kind of environment, for red dwarf stars are often quite active. During the question and answer session, another key question emerged: We know from Kepler that many stars are orbited by multiple planets, and there is no reason to assume that Proxima Centauri has but one.

The question: If there are other, smaller worlds in play here, could the effect of their combined masses produce a ‘phantom’ Proxima c in the orbit Damasso and Del Sordo have discussed?

The two astronomers are completely open to this possibility, and point to the need for follow-up observations with ESPRESSO, not to mention the useful Gaia measurements that could give us even more detail. Flare activity is always an issue in any case — it may have affected the results of Anglada et al. in 2018 (citation below), when researchers found possibly two inner dust belts and one outer belt around the star (see Proxima Centauri Dust Indicates a Complicated System). The Damasso and Del Sordo work is comprehensive as far as it can go, but both were careful to note that we are dealing solely with a candidate, not a confirmed world. And it could well be the result of other, unseen planets affecting the star as well as stellar noise.

This work draws on the earlier Proxima Centauri radial velocity dataset compiled by Guillem Anglada-Escudé (University of London) and team, but folds in an additional 61 RV observations, with considerable attention to the question of filtering out the 85 day rotation period of the parent star and the associated noise of stellar surface perturbations. The instrument in play is the European Southern Observatory’s High Accuracy Radial Velocity Planet Searcher (HARPS) spectrograph at La Silla.

I suspect we’re going to find a number of small worlds around Proxima Centauri, so we’ll see how their gravitational interactions might affect the spectroscopic data and hence the confirmation of the current candidate. But if this detection is confirmed, this is what we’ve found: The planet would mass about six Earths — remember that because this is radial velocity, we can only measure a minimum mass, because we don’t know planetary inclination — and would orbit Proxima Centauri with a period of 1900 days at 1.5 AU. Not exactly a habitable place for the likes of our species. Del Sordo estimates temperatures there would be about 40 K.

We may know, via Gaia, whether Proxima Centauri c is an actual world by the end of this year. A key follow up question is, can we snag a direct image in visible light? If so, it would mark the first such detection of a planet outside our Solar System, the imaged worlds found thus far having been discovered via infrared. There is plenty, in other words, to like about the hypothetical Proxima Centauri c, provided it’s really there. Waiting a few more months could give us a firm answer.

On another matter, as a great admirer of Thoreau, I was pleased that Damasso and Del Sordo quoted him at the beginning of their presentation, and to good effect: “If you have built castles in the air, your work need not be lost; that is where they should be. Now put the foundations under them.” That’s a good metaphor for RV studies as exceedingly delicate as these. I’ll add a favorite bit from one of Thoreau’s poems:

For lore that’s deep must deeply studied be,
As from deep wells men read star-poetry…

There’s poetry indeed in the spectroscopic data of our nearest star, if we can just tease out its meaning. And here’s an image that might evoke a bit of poetry to close today’s entry. 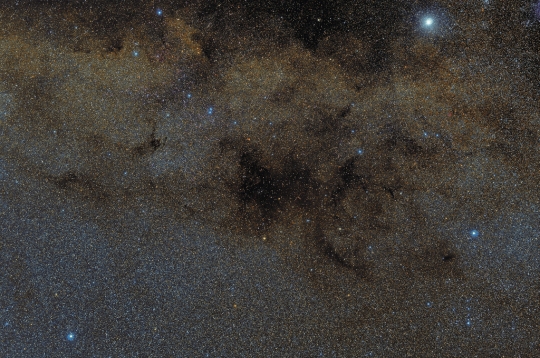 Image: Rigil Kentaurus is the bright star near the top of this broad southern skyscape. Of course it’s probably better known as Alpha Centauri, nearest star system to the Sun. Below it sprawls a dark nebula complex. The obscuring interstellar dust clouds include Sandqvist catalog clouds 169 and 172 in silhouette against the rich starfields along the southern Milky Way. Rigil Kent is a mere 4.37 light-years away, but the dusty dark nebulae lie at the edge of the starforming Circinus-West molecular cloud about 2,500 light-years distant. The wide-field of view spans over 12 degrees (24 full moons) across southern skies. Credit & Copyright: Roberto Colombari.

The paper on dust belts around Proxima Centauri is from Guillem Anglada, “ALMA Discovery of Dust Belts Around Proxima Centauri,” Astrophysical Journal Letters Vol. 850 No. 1 (15 November 2017) (abstract). (Note: This is not Guillem Anglada-Escudé, despite the similarity in names!) The Damasso and Del Sordo paper is as yet unpublished, though undergoing peer review. Video of their presentation is available at https://www.youtube.com/watch?v=DLzzg9p0-AI&t=15648s (go to about 4:16:45 on the video).